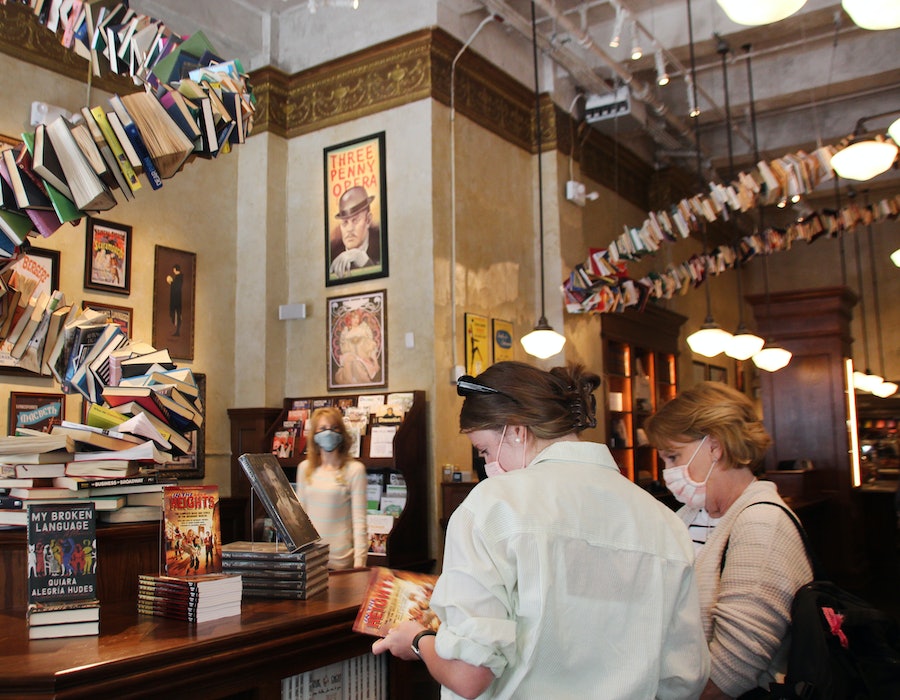 The publishing industry has long been teetering on the brink of one crisis or another, whether that’s a reckoning around its lack of diversity or its perpetually challenged bottom line. But as the global health crisis unfolded in the spring of 2020, authors and publishers found themselves facing an entirely new dilemma. With in-person talks and signings — once the backbone of the book promotion machine — out of the question, would the whole system collapse? Would publishers fail to find new solutions? Would authors’ work not sell? Would independent bookstores go under?

Prior to the pandemic, the strategy for book promotion had remained unchanged for decades. The idea of the book tour was simple: When readers see an author in-person, they’re more likely to buy a book that day, get a signature, and maybe stay loyal to them in the future. It might sound glamorous, like a chance for authors to hold court with fans across the country. But the reality is far more taxing — if an author even gets to go on a book tour in the first place. In the wake of the Great Recession, publishers slashed marketing budgets, leaving most authors responsible for their own publicity efforts. The lucky few who get a publisher’s financial assistance are usually shuttled from bookstore to bookstore and state to state in a flurry of travel reservations and hotel rooms. Still, publishing is a notoriously staid, risk-averse industry, and wasn’t in any rush to pursue alternatives.

So when publishers and authors were forced to pivot amid the new, mask-filled world order, it was an easier change for some than others. No one handled it better than romance genre royalty Christina Hobbs and Lauren Billings, who who write under the singular pen name Christina Lauren. The pair have long been active on social media, hosting giveaways and responding to reader messages, which paved the way for their transition to virtual-only promotion. They’ve also had time to work out the kinks, as they’ve published a whopping three books during the pandemic (The Honey-Don’t List in March 2020, In a Holidaze in October 2020, and The Soulmate Equation in May 2021). “I feel like the Zoom thing happened really quickly. Everybody was like, ‘Okay, we're going to do virtual, but we still didn't really know how to interact,’” Billings tells Bustle of the duo’s initial foray into digital promotion. By the time their most recent book came out, they had it down to a science, hosting a mix of ticketed Zoom events in partnership with bookstores and Instagram Lives to get readers excited.

But just because authors can do a million live broadcasts, virtual Q&As, and digital panels every day doesn’t mean it’s good for their wellbeing. This past spring, YA fantasy author Tricia Levenseller found herself ping-ponging from one Zoom event to another to promote her new novel, Blade of Secrets. “I have social anxiety, so I thought that doing virtual events would be so much easier [than in-person ones],” she says. “If I couldn’t see my audience, then there’d be nothing to make me scared that I'd say or do something embarrassing. But it's actually so hard not seeing if your jokes land, not seeing if you're connecting with the audience.” Not to mention any number of crowd control issues can come up during virtual events. Authors have dealt with “Zoombombing,” and been subjected to comments that are sexist, racist, xenophobic, or just plain rude. “People are a lot nicer face-to-face than they are on the internet,” Levenseller notes.

All that virtual community building doesn’t necessarily translate into sales, either. Leah Koch, co-owner of Los Angeles’ romance-centric bookstore The Ripped Bodice, says she dragged her feet on switching to digital events early on, when it seemed possible the pandemic would blow over in a matter of weeks. She worried that losing the book sales from IRL author meet-and-greets could spell disaster for her small business. “When people come to an in-person event [at a bookstore], I would say about 80% of them are going to buy the book, because the person is going to sign it there in person. There’s also a social pressure component,” she says. “That just completely vanishes when you're online. We're not selling anywhere near what we would typically sell at an in-person event.”

Yet despite this loss in event-driven revenue, Koch actually saw a bump in sales last year. She says community support had much to do with it. “People [put] really serious and focused effort into supporting small businesses. On every order, you can leave a comment when you check out, and every order would say something like, ‘Supporting you from North Dakota!’”

Similarly, Hobbs and Billings say many of their most fervent readers don’t live near the big cities where they’d typically stop on a tour — and others just can’t take the time off to attend. Now, authors can reach the readers who they’d miss on a traditional tour. “A reader usually has a really busy life,” Hobbs says. “They have children and their jobs, and [virtual events] enable them to come to events that they might not otherwise be able to.” It also benefits authors who previously had to skip tours entirely due to a lack of funds. “This is a huge equalizer for [authors] who may not get that chance to still get to talk and engage with their readers.”

Despite those bright spots, a year and a half into the global health crisis, the state of the industry remains bleak. In December 2020, event production company Reed Exhibitions announced that it would “retire” BookExpo, BookCon, and Unbound, three big book publishing trade shows in the U.S. that brought together authors, readers, and publishers under the same roof while also driving major book sales. Their reasoning? The pandemic had upended the future of IRL gatherings, and the organization wanted to “explore new ways to meet the community’s needs through a fusion of in-person and virtual events,” though there’s no word so far on what that actually means. (Reed Exhibitions did not respond to Bustle’s request for comment.) Additionally, bookstores across the U.S., especially independent ones, continue to struggle.

In the new normal, the book promotion buzzword bubbling up from authors, publishers, and booksellers alike is “hybrid” — as in, creating a new book touring model comprised of both in-person and virtual events.

Brittany Pearlman, a senior publicist at Macmillan Children’s Publishing Group, says she doesn’t want to lose the more experimental mindset that’s surfaced in the industry. Forced to rethink long-held strategies and get creative to reach new readers, her team pivoted, hosting intimate virtual chats between authors and the media and creating special digital events where readers could interact one-on-one with their favorite writers — two ideas her department might not have fully committed to before the pandemic. “I am confident we'll never return to the pre-pandemic thinking,” she says.

But while the idea of a hybrid model is fresh on everyone’s mind, Koch isn’t convinced that post-pandemic book promotion will really look all that different. “There might be changes, but I think most people want to just go back,” she says. “I guess we’ll see if that happens.”