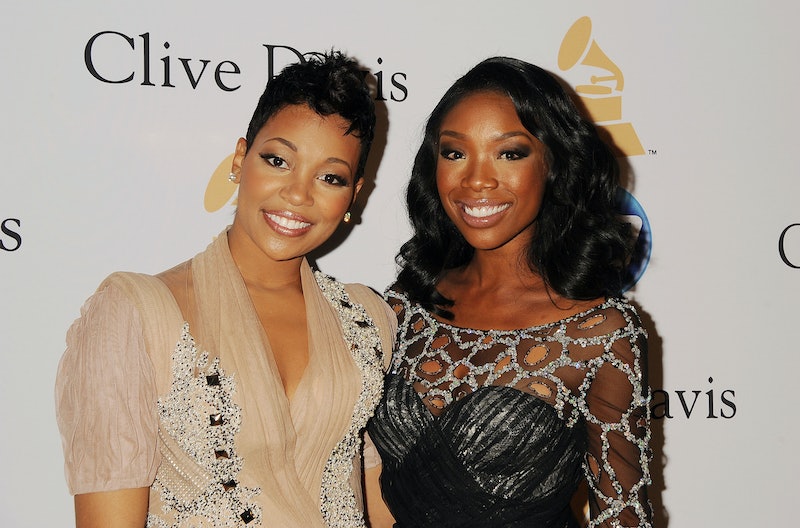 Two titans of music are finally facing off once and for all after years of public rifts and rumored conflicts — no, not Taylor Swift and Kanye West. Brandy and Monica will appear on Apple Music's Verzuz web series on Monday, Aug. 31, in what will be a historic reunion for "The Boy Is Mine" singers. Brandy and Monica's friendship timeline isn't very clear, as it's filled with denied feud rumors, alleged altercations, and shade in the Instagram comments section. But one things fans do know is that there has been some friction between the iconic R&B singers over the years, and the latest flare-up was more recent than you may think.

Brandy and Monica released the superstar collaboration that started it all, "The Boy Is Mine," back in 1998, or what we now refer to in 2020 as "the good ol' days." The song, which sees the duo battling it out for the heart of some irrelevant man, took over airwaves that year and predictably sparked rumors of a real-life feud.

There was a persistent rumor that the singers came to blows in a physical fight backstage while rehearsing for their performance at the 1998 Video Music Awards, with some claiming that Brandy gave Monica a black eye. Their representatives denied the story to MTV News at the time. However, as the pair later revealed over a decade later, there was indeed fire when that smoke appeared.

In 2012, over 14 years after "The Boy Is Mine" became an instant classic, the singers reunited for another surefire collaboration, "It All Belongs to Me." During a radio interview to promote the track, Monica confirmed that the fight they once denied actually did happen, clarifying that she apologized for her part in the ordeal and that no one was hurt. And, given their new collaboration, it seemed like all the bad blood was behind them.

In a new 2020 interview with Entertainment Tonight, Monica said that the rumors surrounding their feud led them to actually have conflict with each other in real life, which reached a boiling point quickly. “It was not something that I would say was anyone's fault,” she said. "We all added to it and after a while it became real.”

Many are still confused about whether Monica and Brandy were feuding once again in 2016, but one thing is for sure: their fans were fighting for them regardless. In September 2016, Monica asked fans to participate in the "So Gone Challenge," which required them to sing their own rendition of her 2003 hit "So Gone." When a fan asked Brandy on Instagram if she would participate, the singer responded with a simple "Chile bye," according to E! News.

That shade was enough to start a war in the Instagram comments section. Brandy reportedly alluded to being annoyed by the situation in a series of Snapchat videos, and even referenced the ongoing battle between her and Monica's fanbases during her performance at the 2016 Soul Train Awards. The singers were even forced to respond to fans at one point, when Monica and Brandy posted about their friendships with Mary J. Blige and the late Whitney Houston, respectively.

Now, Brandy and Monica are ready to put their feud to bed for good on Verzuz. Hopefully, now that over two decades have gone by, fans will finally be ready to let all the drama go.