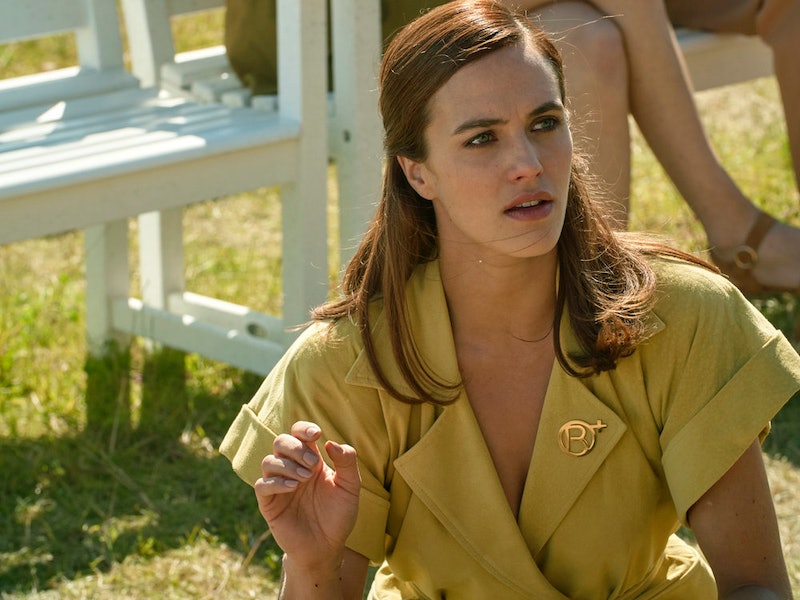 Spoilers ahead for Brave New World. Though Peacock's Brave New World adaptation engages with questions of individuality, agency, and the dangers of technology, at the core of the story is also a love triangle. Based on Aldous Huxley's 1932 dystopian novel of the same name, Brave New World puts a modern spin on the tale of Bernard (Harry Lloyd), Lenina (Jessica Brown Findlay), and John the Savage (Alden Ehrenreich). While the show still focuses on their evolving relationships, there's quite a few differences between the Brave New World show and the book.

New London vs. The World State

In Huxley's novel, Lenina and Bernard's society — a so-called utopia that's actually a dystopia — is called The World State, and it's similar to Brave New World's New London. Human beings no longer reproduce, and each fetus is created in a lab and designated as a particular caste. The five castes are Alpha, Beta, Gamma, Delta, and Epsilon; Alphas and Betas are designated the smartest and most privileged, while the lower castes are cloned and given undesirable jobs. Once born, the children are all conditioned — using electric prods in the show and hypnopedia in the book — to stick to their designation. This conditioning goes hand in hand with taking Soma, a drug that allows people to do away with "malice and bad tempers" and feel contentment, even while they're being taken advantage of.

The show introduces an extra layer to all this though with the supercomputer Indra, which allows everyone to monitor everyone else and ensure total conformity.

The Commodification of Sex

In both the book and on the show, this is what makes Lenina and Bernard stand out. Lenina sleeps with just Henry for four months, a "long-drawn" thing that her friend Fanny finds disturbing. Bernard is labeled a misfit because he's uncomfortable with the transactional nature of sex, and struggles to go on a date at all.

However, the focus on both Lenina and Bernard's shortcomings is more intense in the show, which uses Indra's ocular implants to stream their activities to all their peers.

Though show and book Bernard share some similarities, show Bernard is less of a villain and more of an awkward coward. In the book he's described as "physically defective" because he's too short and skinny for an Alpha. He's also mocked by both Alpha men and women in the book, and not respected by lower caste members. In the show, it just seems to be Henry who antagonizes him the most, though it's clear that Bernard also treats himself with disdain.

In both iterations, Bernard is positioned as the lead protagonist, but there's a catch: though he appears to be a political agitator at first, the introduction of John reveals that Bernard just wants to fit in to high society, not topple it. This differentiates him from the revolutionary John, who takes over as the main protagonist during the course of the novel.

The way the show and the book portray this change are very different, though; show Bernard just seems to embarrass himself at parties, while book Bernard actively manipulates events (like allowing John's mom Linda to die in The World State) to benefit his social standing.

Similar to Bernard, scientist Lenina is a much more nuanced and sympathetic character in the show. Though she's still the object of desire for both Bernard and John in both iterations, show Lenina has much more agency and character growth. While book Lenina is content with taking Soma and sticking to the social order, show Lenina sees the pitfalls of Indra's systems early on and quietly begins to undermine them.

Lenina's relationships with both men are also much more sensitively portrayed in the show. Show Lenina seems intrigued by Bernard, and her attraction only wanes when it's clear Bernard isn't interested in exploring how their Savage Lands experience changed them. In the book, Lenina simply thinks Bernard is a strange man she can use to social climb. Her relationship with John in the book paints her in a poor light, too — she attempts to seduce John because she's never slept with a "savage" before, and John becomes furious, calls her a whore, and beats her.

The Reservation vs. the Savage Lands

In the show, Savage Lands is a campy amusement park where workers put on trashy trailer park plays to remind New Londoners of how non-Indra using "savages" lived without their caste technology. This is a much needed update from the book, which featured a literal Native American reservation where World State citizens could gawk at indigenous inhabitants.

In the show, Lenina and Bernard are also deeply affected by the bloody uprising that occurs while they're visiting the Savage Lands, but no such event happens in the book.

John and Linda are the only white inhabitants of the Reservation in the book, and the reason they go to the utopia is very different. While John ends up in New London because of the uprising, in the book Bernard simply asks John to come with him. Bernard realizes almost immediately that John is the director's son, and he intends on using John as a way to humiliate the director, who has threatened to fire Bernard over his aberrant behavior. In the book, Linda also survives the trip, and dies much later on in the story.

John never watches Lenina pick up a dead bird like in the show, where it's implied to be the moment he first falls for her. In fact, book Lenina is so disgusted by the whole trip that she takes enough Soma to knock her out for 18 hours after the uneventful trip.

Also, it has to be said that book John quotes Shakespeare constantly and holds very backward and sexist views of women.

Mustapha Mond is the leader of the utopia; in the book he's a man, and in the show Mond is played by Nina Sosanya. In both versions, Mond is a paradox, appreciating art and history yet creating a totalitarian society that stamps both of those out. Mond's prickly relationship — and later, fear — of Indra's AI programming is unique to the show.

Like Mond, book Helmholtz also gets a modern update for the show, becoming Wilhelmina ‘Helm’ Watson, played by Hannah John-Kamen. Helm is the creator of the feelies, but she retains the strong personality of her book counterpart. In both versions she acts as a foil to both Bernard and John; unlike Bernard, she finds their society stifling because she's too outspoken for it. But unlike John, she still turns her nose up at human sentiment and poetry.

Joseph Morgan's CJack60, an Epsilon who begins to think above his station, is also unique to the show. It's through CJack60 and the rest of the characters that Peacock's Brave New World is able to paint a picture of society that appears to be all happy, all the time, but is in reality anything but.

More like this
Everything To Know About 'The Real Housewives Ultimate Girls Trip' Season 4
By Jake Viswanath
Andy Cohen Apologized To Larsa Pippen After A 'RHOM' Season 5 Reunion Dust-Up
By Brad Witter
'Knock At The Cabin' May Start Streaming Sooner Than You’d Think
By Jake Viswanath
6 'Happy Valley' Easter Eggs You May Have Missed
By Sophie McEvoy
Get Even More From Bustle — Sign Up For The Newsletter
From hair trends to relationship advice, our daily newsletter has everything you need to sound like a person who’s on TikTok, even if you aren’t.