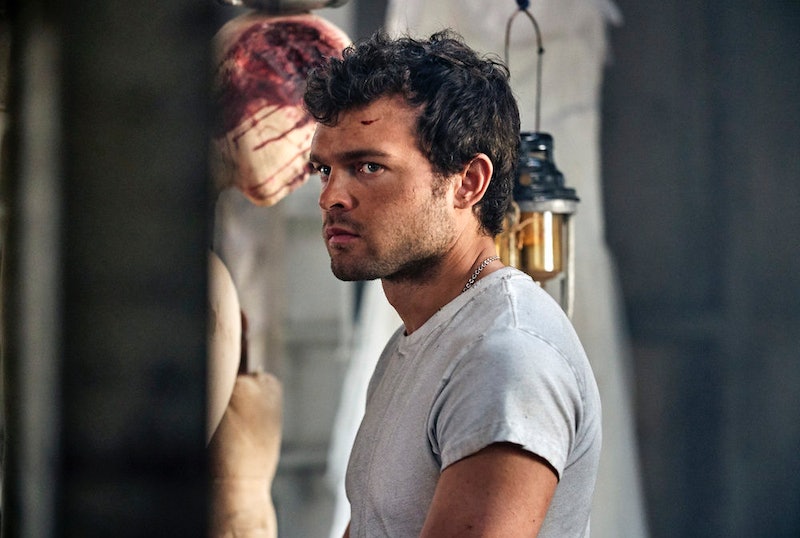 One of the first offerings from NBCUniversal's new streaming service Peacock is an adaptation of Aldous Huxley's 1932 dystopian novel, Brave New World. But while the series is one of the new streaming service's first out of the gate, its journey to Peacock has been a long one — and whether Brave New World returns for Season 2 will largely depend on the success of Peacock and how many subscribers it can rein in.

Like the classic novel, the series follows residents of the futuristic New London society — Bernard Marx (Harry Lloyd) and Lenina Crowne (Jessica Brown Findlay), who are born from test tubes and assigned to a genetic caste at birth — as they begin to question the rules of their world. The series wasn't initially intended to launch a streaming platform: Before Brave New World landed at Peacock, Deadline announced in 2015 that the television adaptation would be produced through Syfy and Steven Spielberg's production company Amblin TV. In February 2019, the series moved to the USA Network (both it and Syfy are NBCUniversal subsidiaries) before it finally moved to Peacock last September.

This isn't the first time Brave New World has received the NBC treatment: In 1980, the network released a two-part miniseries, which was nominated for two Primetime Emmys. The more recent version was a 1998 TV movie, which also premiered on NBC and starred Peter Gallagher as Bernard Marx and the late Leonard Nimoy as Mustapha Mond. However, that version was less positively received, with ScreenRant's Padraig Cotter lamenting the film's manufactured happy ending was "an unsatisfying translation of the source material."

This most recent Huxley adaptation isn't receiving rave reviews, either, which may dictate whether it gets a Season 2 order or not. That said, Peacock's Brave New World might follow in the footsteps of its streaming predecessor, Apple TV+, which renewed all of its debut shows for a second season, regardless of the critical response.

Furthermore, it is famously difficult — though not impossible — to translate dystopian novels onto the screen. Just look at adaptations of Ender's Game, Fahrenheit 451, The Road, or David Lynch's Dune (though Denis Villeneuve's upcoming version looks promising). As Alexis Soloski pointed out in the New York Times, the society that Huxley predicted — one where monogamy is discouraged, and drugs are taken to assuage feelings — is in many ways already a reality in 2020. Does that, by extension, make the series nonessential?

It's a brave new world for competing streamers, and only the strongest survive.

More like this
Hallmark’s The Way Home Is Like 'This Is Us' Meets 'Back To The Future'
By Grace Wehniainen
Netflix Shut Down 'Bridgerton' S3 Rumours About A “Very Dark” Storyline
By Bustle
Everything To Know About 'The Real Housewives Ultimate Girls Trip' Season 4
By Jake Viswanath
Andy Cohen Apologized To Larsa Pippen After A 'RHOM' Season 5 Reunion Dust-Up
By Brad Witter
Get Even More From Bustle — Sign Up For The Newsletter
From hair trends to relationship advice, our daily newsletter has everything you need to sound like a person who’s on TikTok, even if you aren’t.