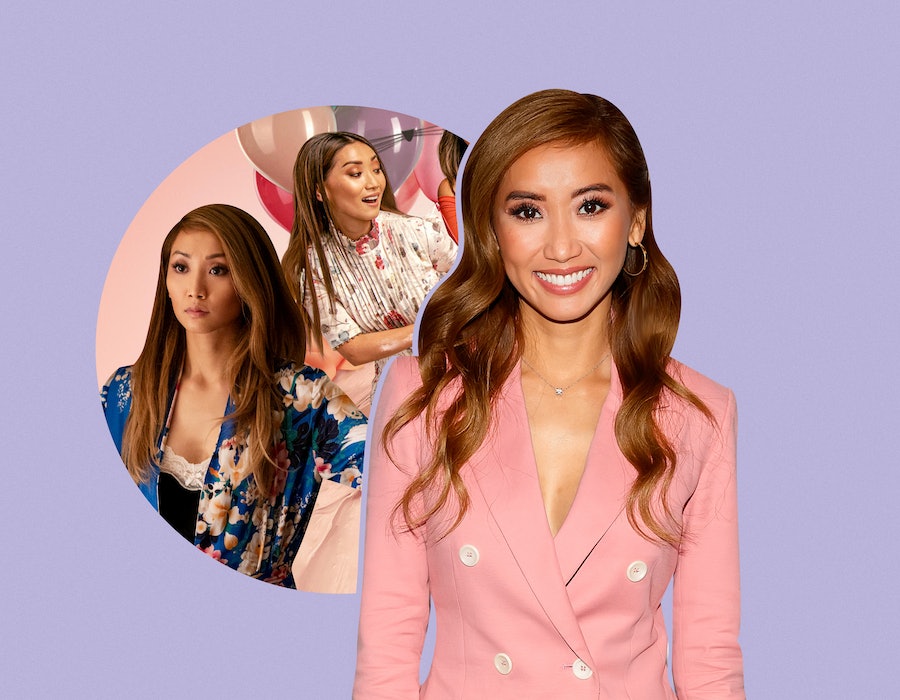 When Brenda Song first auditioned for Dollface, she was feeling a bit delirious. She’d spent the night and wee hours of the morning filming the Netflix thriller Secret Obsession. But despite the tight turnaround between her wrap time and audition slot, nothing was going to stop Song from giving it her all.

“There was a big speech that Madison had to say while on the treadmill. I was insane and did the whole scene running. I finished it and they were like, "First of all, you're the only person that's done that and you totally didn't have to,” the 33-year-old tells Bustle. While Song’s unparalleled commitment to the material scored her the part, she wasn’t too sure of her performance. “I thought I bombed it. I was so tired, my eye was twitching. I was such a mess.”

Song has embodied this “go big or go home” ethos ever since she turned down a spot at Harvard at 16 in order to pursue acting full-time. Though she had previously starred in a handful of Disney Channel original movies, it wasn’t until she was offered a role on the network’s The Suite Life of Zack & Cody that she decided this was her chosen path — college be damned. As London Tipton, the would-be Eloise of the hotel the show centered on, Song went all-in on her character’s ditzy brand of comedy, from the way she’d clap her hands whenever uttering London’s catchphrase, “Yay me!” or the emotional nuance she brought to the Paris Hilton-like heiress.

But even the most seemingly indefatigable people have their limits, and Song almost hit hers while working on Season 2 of Dollface. She was due to start filming shortly after giving birth to Dakota — the son she shares with her now-fiancé, Macaulay Culkin, who proposed to her shortly after this interview — and juggling sleepless nights with long days on set was nearly more than the can-do Song could actually do. “We went back to work literally 12 weeks after he was born. It was super intense. I was still breastfeeding,” Song says. “I look back on it now and I was like, ‘Why did I do that?’ But I'm so grateful. I'm really lucky because I have such a great support system at home and on set.” If there’s a challenge, Song’s going to accept it.

Below, Song reflects on the scarcity of roles for Asian Americans in Hollywood, meeting Culkin, and what draws her to type-A characters.

You’re not one for slowing down, but prior to landing Dollface, you were doing just that. What was the impetus for that choice? Meeting your partner?

The funny thing is I actually met him almost nine years ago, but I didn't remember meeting him. I was doing a show with a mutual friend of ours and he came to the set, which I don't remember. That same friend, four and a half years ago, wrote and directed his first movie [Changeland] and he hired basically all of his friends. So we went to Thailand for seven weeks to shoot it.

Right up until we were about to film, I actually had a couple roadblocks. I was like, "Am I not meant to go?” Another project came along and I was like, "No, I want to spend seven weeks in Thailand with some of my best friends." My manager was like, "Are you sure? You're turning down this job to go do a little indie...” It was the best decision I ever made because I met my boyfriend and then we spent a lot of time traveling. I'd never really done that.

You’d been too booked and busy on Disney your whole life!

Where did you guys go?

We spent a lot of time in Europe. He was living in Paris and I'm like, "Oh, really? You have a place in Paris?" We also traveled within the U.S. We went to Montana, New Orleans, Vermont, Amsterdam, Germany. Wherever we felt like going, we kind of just went. And it was really nice and I feel very fortunate to have been able to do so.

Coming back, I was in a place where I wasn't sure where I fit in this industry. We were actually in Europe when I got the call for Secret Obsession. I was like, "What? This is a thriller. I've never done anything like this. Sure. Why not?" In the middle of that is actually when I got the audition for Dollface.

You’ve spoken about how after Suite Life, you weren’t drawn to parts that would immediately dismantle audience’s perceptions of you as a Disney star. What made you realize going “dark” wouldn’t be right for you?

I think there's this stigma about coming out of Disney where people are almost ashamed of it. I was like, “No, I've been fortunate enough to work since I was very, very young.” There’s a lot of pressure when you come out of it to become an adult actor right away. But for me personally, I’ve lived such a sheltered life because I was on a set all the time. I had my first kiss on camera. So while there were a lot of [dark] parts that came around I just let people know, "I'm not cool enough to go and play this dark role. Sorry, guys." People were really surprised.

There’s real power in saying “no.” How did you develop the conviction to stand your ground?

Seth Green actually gave me great advice. He always said, "Careers are not defined by what you say yes to, they're defined by what you say no to." There have been a lot of opportunities where I could've shot shows that have been very successful, but they shot far from my home and it was important for me to stay here because I'm close to my family. You have to really stay true to your priorities in life.

Your partner also famously walked away from Hollywood. How has being in a relationship with him further empowered you to say “no?”

That’s something that I admire and respect so much because, in every case — [his] personal life, professional, or anything — he always stays true to himself because he's been judged in every way, shape, or form. Watching that was shocking because it's also very different for me. He's a white male. I'm a 33-year-old Asian American. There's always that fear that the opportunity will not be there again. That's something that I've had to get over. That fear of going, "I don't have a lot of opportunities. So if I say no, they might not come back."

I realized I had to be okay with letting those things go because, at the end of the day, staying true to myself was more important. Watching someone who makes decisions that are solely based on their happiness and wellbeing is very inspiring and it's taught me a lot because it’s hard. It's hard to not say yes to things when everyone's like, "You should to it." I think where I am in my life has a lot to do with my partner and being a mom.

The scarcity of roles for Asian Americans is something you’ve dealt with throughout your career. You’ve spoken about how as a child you couldn’t go out for “daughter of the main character roles” because the main character was always white. What did those early experiences teach you about your racial identity?

Being a child actor I learned rejection at a really young age. Knowing that you aren't being taken seriously because you're the only minority person in an audition room and that you can't play certain parts because you don't have blonde hair, blue eyes. I'm not going to play Harrison Ford's biological daughter, you know what I mean? It was a hard lesson to learn because I was very fortunate and grew up in a community [where] I wasn't defined by my race or the way I looked. But at the same time, it almost didn't register because you're so young so you don't necessarily understand that there's racism. Thank god the industry has changed so much in the last just 10 years. But because I'm 33, I've been in this industry for 29 years. So when I was coming up it was like, if I got to play girl number two, it was a big deal. If I had an audition for that, that was a big deal.

Now you’ve carved out a niche for yourself playing uptight yet comedic characters, whether it’s Dollface’s Madison or Daisy on New Girl. What draws you to these unapologetic neurotics?

I leaned towards the uptight because London was the exact opposite, so I wanted to fight against my instinct in comedy. That's why the roles that I gravitated to afterwards were much more dialogue intense and just more intense in general — because I had been [playing London] for so long.

Instead of just going "This character is type A," it's about going, "Why is this person that way? Where does that come from?" Trying to find characters where the funny comes from their weakness or fears is an interesting choice for me as an actor, because that's the fun of my job: dissecting these characters and making my own person up in my head.