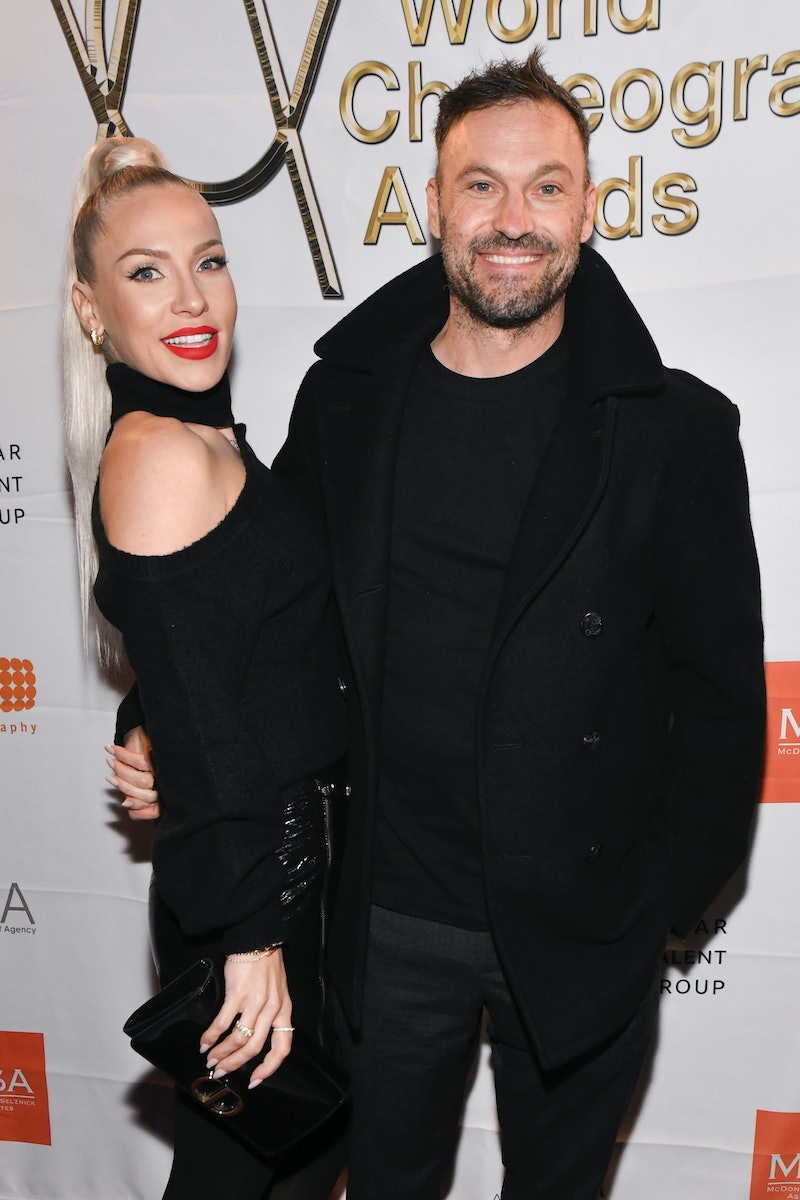 Proving that a picture is worth a thousand words, Brian Austin Green and Sharna Burgess announced they’re expecting their first baby together with a beach photo shoot. While vacationing in Hawaii, the couple posed for maternity photos, which several outlets, including People and E!, published on Friday, Feb. 4. The couple of more than a year has yet to publicly comment on Burgess’ pregnancy, but Green tellingly posed with his hands cradling his bikini-clad former Dancing With the Stars partner’s growing baby bump in one shot.

Though this will be the pair’s first child together, Green is already dad to Journey River, 5, Bodhi Ransom, 7, and Noah Shannon, 9, with ex Megan Fox, as well as 19-year-old son Kassius with ex-fiancée Vanessa Marcil. The Beverly Hills, 90210 alum and Burgess met at a coffee shop and began dating in October 2020. After “a few dates,” the COVID-19 pandemic forced them to be “locked in a house together” during quarantine. “I was grateful for that because it allowed us to really take our time, and it was really awesome,” the DWTS pro told People in June.

A month later, Green, who celebrated his milestone one-year anniversary with Burgess on Oct. 16, shared an Instagram photo of them kissing at Walt Disney World’s Animal Kingdom. “It’s been a really long time since I’ve been with someone I can truly share life with,” he captioned the July 6 post. Fox reportedly noticed the photo, writing, “Grateful for Sharna,” in a since-deleted comment, of which the Comments By Celebs account shared a screenshot.

After Fox apparently deleted her comment, fans began to speculate that her well wishes may have been more sarcastic in nature — a rumor that Green later refuted. “For people that need or want clarification. Megan and I get along great,” he wrote in a July 7 Instagram story. “Neither of us are sending petty digs to each other. We both work really hard to get along and coparent well for our kids. Now stay safe and spread kindness and love.”

Following Fox announced her engagement to Machine Gun Kelly in January, an insider told People that there’s no bad blood between the exes, who confirmed their split in May 2020 after nearly 10 years of marriage. “As long as they’re both on the same page with the kids, he’s good and happy for her,” the Green source explained. “They’re strictly co-parents. He’s got another woman that he’s super into. He’s entirely moved on.”

With his fifth child now on the way, that could be truer than ever.

More like this
RHOP’s Robyn Dixon Explained Why Juan Paid For Another Woman's Hotel Room
By Brad Witter
Who Is Allison Williams Dating After Her Divorce? She’s Engaged With A Child
By Jake Viswanath
Molly-Mae & Tommy Fury Revealed Their Baby Girl's "Really Unusual" Name
By Sophie McEvoy and Sam Ramsden
Kylie Jenner Clarified How To Pronounce Her Son's New Name
By Jake Viswanath
Get Even More From Bustle — Sign Up For The Newsletter
From hair trends to relationship advice, our daily newsletter has everything you need to sound like a person who’s on TikTok, even if you aren’t.