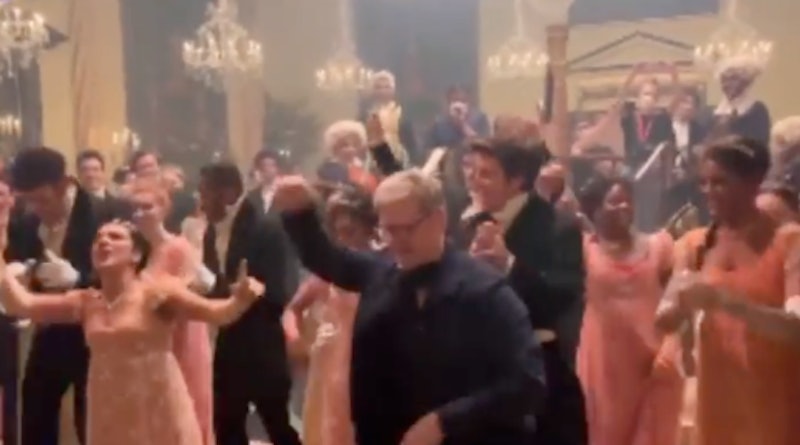 Giving a behind-the-scenes glimpse into life on the Bridgerton set, the show’s choreographer Jack Murphy shared footage of the cast’s wrap party for Season 2, featuring the cast and crew dancing to Sister Sledge’s “We Are Family.” It’s quite a change from the music of Regency-era London, when the high society would’ve been more likely to bust their finest moves to Mozart’s piano sonatas.

According to actor Luke Newton, who plays Colin Bridgerton, the routine was originally show star Jonathan Bailey’s idea, and the cast would often join forces for the dance number to perk themselves up during long days filming. In the clip, Bailey (who plays Anthony Bridgerton) throws himself into the routine and attempts to twerk, before hugging fellow actor Simone Ashley (Kate Sharma). Meanwhile, Charithra Chandran (Kate Sharma) smiles and looks on.

“Sometimes after lunch, energy can dip a bit,” Newton told Insider. “It was Jonathan Bailey who asked the choreographer, Jack Murphy, if we could have a more modern dance that we could do on set. We wanted something that we could just put on. So we had Sister Sledge’s ‘We Are Family,’ and we had a little routine that we’d bust out to bring everyone’s energy levels back up.”

The cast’s routine is led by Murphy, who previously brought dance scenes to life in Bridget Jones and History Boys. The show’s Phoebe Dynevor (who plays Daphne Bridgerton) previously told Harper’s Bazaar that Murphy’s involvement was integral in establishing chemistry with her onscreen love interest, Regé-Jean Page (Simon Basset, Duke of Hastings) in the first season.

“I think the thing that actually really helped the chemistry was all the dance rehearsals, because we just spent so much time with our choreographer, Jack Murphy, and loads of time in the studio — just me, Regé, and Jack, sort of getting the moves right and dancing to this modern, fun music,” she said.

“And we just got time to play and sort of form a connection. I think that was so beneficial, actually, in getting the chemistry right.”

More like this
Twitter Is Burning As Phoebe Dynevor Reveals Daphne’s 'Bridgerton' Exit
By Sophie McEvoy
This Pre-'Love Island' Video Of Olivia & Zara Together Changes Everything
By Bustle UK
The Banned 'Friends' Ad Shows Monica As You’ve Never Seen Her Before
By Sam Ramsden
Twitter Has Renamed Ekin-Su After *That* 'Dancing On Ice' Performance
By Sophie McEvoy
Get The Very Best Of Bustle/UK
Sign up for Bustle UK's twice-weekly newsletter, featuring the latest must-watch TV, moving personal stories, and expert advice on the hottest viral buys.