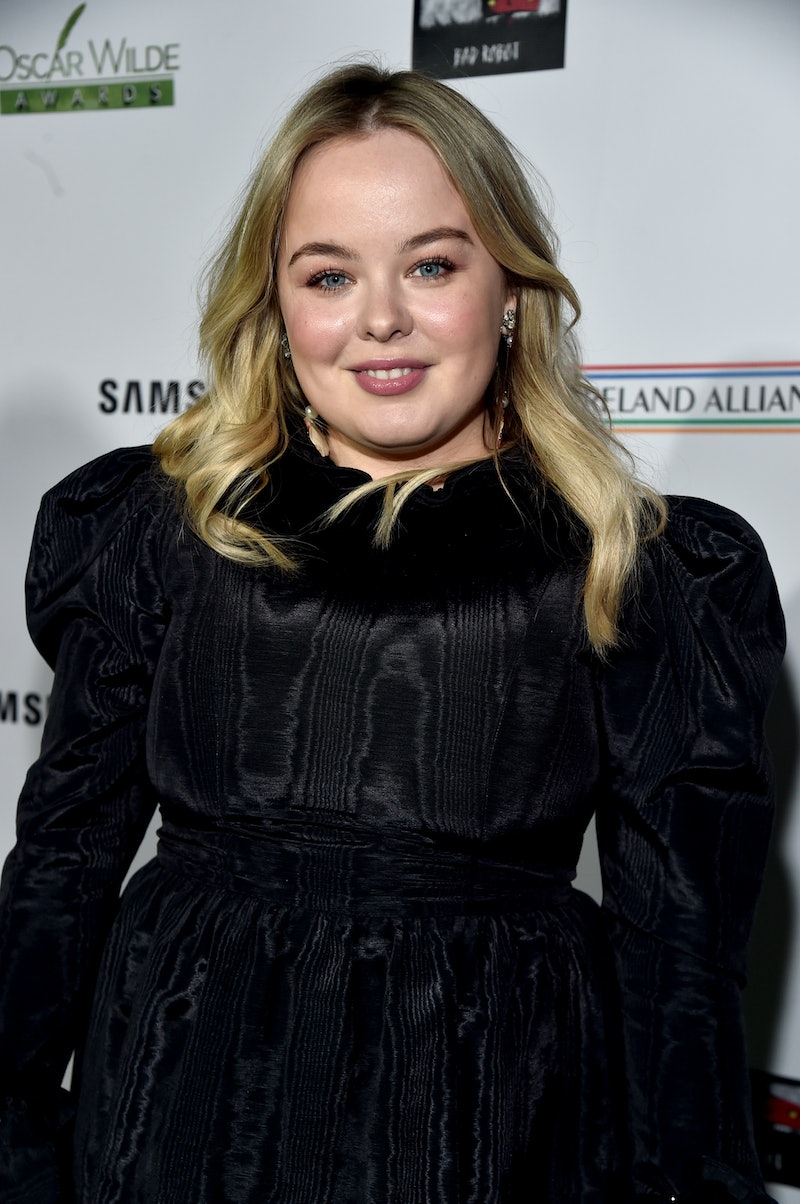 To watch Sunday's Golden Globes from home, Bridgerton's Nicola Coughlan donned a gorgeous yellow pastel Molly Goddard gown paired with a black cardigan and a bright pink eyeshadow look. According to Vogue, the Irish actor's look shows her "firmly staking her claim as a red carpet star in the making." However, not everyone was as pleased with Coughlan's ensemble. Podcast host Amanda Richards posted a tweet ruthlessly criticizing her outfit on Feb. 28, and the actress swiftly clapped back.

"The fat girl from Bridgerton is wearing a black cardigan at the Golden Globes, because no matter how hot and stylish you are," wrote Richards, "if you're a fat girl there will always be a black cardigan you think about wearing, then decide against, but ultimately wear because you feel like you have to."

The tweet immediately garnered backlash from Coughlan's fans, who called the remarks "insensitive," "absurd," and "wholly hurtful." It also garnered a response from Coughlan herself. "I thought the cardigan looked ace," wrote the Bridgerton star. "Molly Goddard used them on her runway with the dresses that’s where the idea came from, also I have a name."

Richards quoted the tweet and added a simple response: "Fair enough." Many Twitter users expressed to the host that the tweet was "insanely mean" and could have hurt Coughlan's feelings. Richards defended her use of the word "fat" — especially against users who had taken to insulting her back with more hateful language. She tweeted, "People scolding me, a fat person, for using the word fat as a descriptor while simultaneously calling me a c*nt, a b*tch, a sh*t stain, and a tw*t...you simply love to see it."

One user reiterated that the outfit was more likely a "choice" than a "cover up," and the podcast host responded in agreement. "Agree, her style is killer. And it was a choice! She replied and said so, and correctly called me out for not using her name," wrote Richards. "I definitely projected my own feelings about the requisite fat girl cover up cardigan onto that look."

Aside from the minor spat, Coughlan seemed to be more than pleased with her pseudo red carpet look. "Red carpets and shoots are SO intimidating and when I first started to do them I was terrified and didn’t feel fully myself," she tweeted. "But having a brilliant stylist like Aimee has just allowed me to have so much fun with fashion and it’s just been a total joy."

More like this
'The Crown' Season 6 Has Suspended Filming "Out Of Respect" For The Queen's Death
By Bustle Staff
Here’s Everything Coming To & Leaving Netflix In February
By Jake Viswanath
At 28, Debra Jo Rupp Was Living A Much Different '70s Show
By Grace Wehniainen
'That '90s Show' Star Callie Haverda Got Advice From Mila Kunis & Ashton Kutcher
By Brad Witter
Get Even More From Bustle — Sign Up For The Newsletter
From hair trends to relationship advice, our daily newsletter has everything you need to sound like a person who’s on TikTok, even if you aren’t.