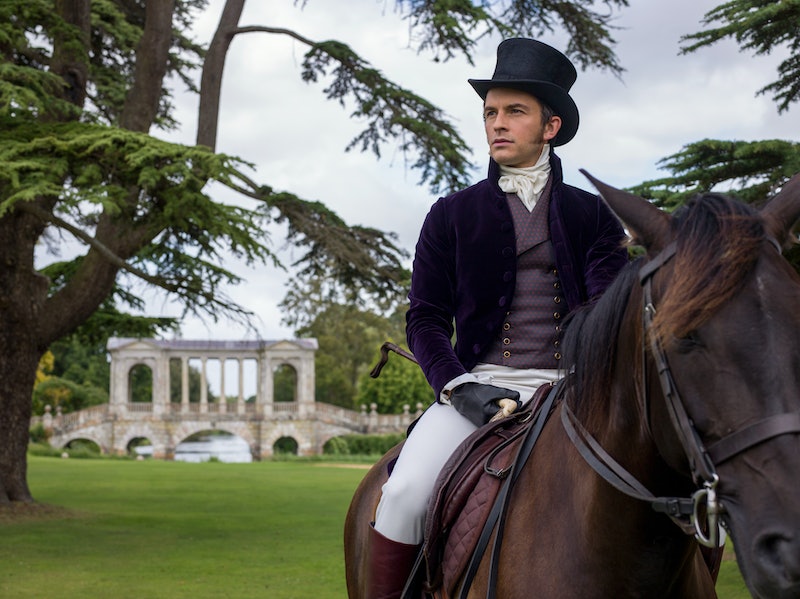 Lady Whistledown would have something to say about this! Bridgerton stars Jonathan Bailey and Simone Ashley were spotted filming Season 2, offering fans a small glimpse at the two character’s upcoming romance. Bailey, who plays the titular family’s eldest son, Anthony Bridgerton, was photographed standing alongside Ashley, a new cast member who portrays his future love interest Kate Sharma, as per People.

Bailey and Ashley’s characters appear to be attending a horse race in the photos and can be spotted alongside other Bridgerton cast members, including Claudia Jessie, who plays Eloise Bridgerton; Luke Newton, who stars as Colin Bridgerton; and Luke Thompson, who plays Benedict Bridgerton. The family matriarch, Lady Violet Bridgerton, played by Ruth Gemmell, also appears on set. While the photos offer some hints at what might be ahead in Season 2, none of the stars has yet addressed the image on social media.

Bridgerton, which premiered on Netflix in December 2020, follows eight siblings in a fictional high-society family as they navigate love and romance in Regency-era England. Season 2 will shift its focus away from its Season 1 sweethearts, Daphne Bridgerton (played by Phoebe Dynevor) and Simon Basset, the Duke of Hastings (played by Regé-Jean Page). Dynevor’s participation in the season is expected to be limited, and Page will not appear as the actor is pursuing other opportunities.

In February, Deadline reported that Ashley had been cast as Kate Sharma, the series’ next lead and the eldest Bridgerton son’s new love interest. The character’s official description says she is “newly arrived in London” and “a smart, headstrong young woman who suffers no fools — Anthony Bridgerton very much included.” Ashley, who fans might recognize from her role as Olivia Hanan in Netflix’s Sex Education, is expected to be one of several new additions to the cast.

Earlier in February, during an interview with British Vogue, Bailey promised “the campy, plush spectacle” of Bridgerton would be very much intact in Season 2. The actor also teased that there would be “a lot of brilliant characters introduced in this series” and the show would “keep pushing boundaries in a way that’s quietly subversive.” He added: “There’s just going to be more of what everyone loves, I think.”

The second season of Bridgerton doesn’t yet have a release date.

More like this
'The Crown' Season 6 Has Suspended Filming "Out Of Respect" For The Queen's Death
By Bustle Staff
'The Queen’s Gambit' Season 2 Tweet Wasn’t From Anya Taylor-Joy
By Mary Kate McGrath, Jack Irvin and Grace Wehniainen
Netflix Shut Down 'Bridgerton' S3 Rumours About A “Very Dark” Storyline
By Bustle
Ashton Kutcher Wants Danny Masterson “To Be Found Innocent” In Rape Retrial
By Jake Viswanath
Get Even More From Bustle — Sign Up For The Newsletter
From hair trends to relationship advice, our daily newsletter has everything you need to sound like a person who’s on TikTok, even if you aren’t.