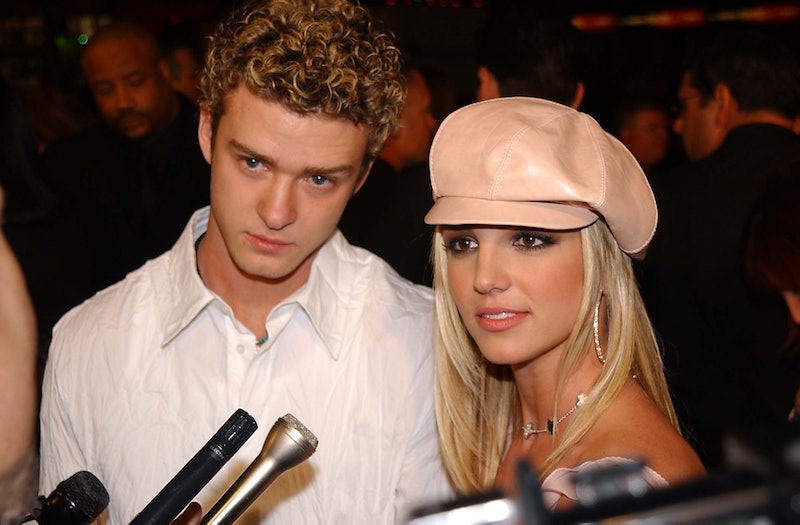 The New York Times Presents Framing Britney Spears doc, released Feb. 5, further stoked fans’ calls to free the singer from her controversial conservatorship. But it’s not just Spears’ father and conservator, Jamie Spears, who is the subject of supporters’ anger. Fans are also taking to Justin Timberlake’s Instagram, criticizing the singer and actor for his behavior following his breakup with Spears in the early 2000s.

In the documentary, archival interview footage shows Spears defending herself against rumors that she cheated on Timberlake: Diane Sawyer notably brings Spears to tears during a conversation in which she asks, "What did you do?" in reference to their breakup. It's an accusatory air that also lingers over moments like the music video for Timberlake's song "Cry Me A River," in which a blonde woman who looks a lot like Spears is depicted cheating on the singer.

There's also audio of Timberlake laughing as he affirmatively answers an interviewer who asked, "Did you f*ck Britney Spears, yes or no?" That Timberlake could be so glib about his relationship with the singer — especially when Spears was already a target for questions about her virginity and private life, as shown in the doc — led many commenters to blame him in part for Spears' fraught dynamic with the press.

Bustle has reached out to Timberlake regarding the doc, but he hasn't released any statements or posted anything on social media. Now, his Instagram comments section is filled with calls to #FreeBritney and demands that he apologize. A quick scroll through his profile will reveal comments like, "Everybody owes her an apology including you," "So when are you apologizing to Britney?" and "Accountability for what started his solo career ain’t coming anytime soon." Another Spears fan wrote, "Timberlake has a history of misogynistic, self promoting behavior: his public treatment of Spears, his Behavior w Janet Jackson at the Super Bowl. His frat boy humor on SNL... he may be talented but this doesn’t make him a good man."

Some of his fans defended him, suggesting The New York Times dug up this story "for controversy" and claimed Timberlake had nothing to do with the public perception of Spears. Her fans quickly shot back, though, and responded, "He literally brings up the breakup whenever he can to stay relevant. What are you not computing?"

It's unclear if Timberlake and Spears have spoken privately about their relationship and the fallout of Framing Britney.

More like this
'Friends' Star Maggie Wheeler Offers Support To Matthew Perry After Reading His Memoir
By Alyssa Lapid
'That '90s Show' Star Callie Haverda Got Advice From Mila Kunis & Ashton Kutcher
By Brad Witter
The Banned 'Friends' Ad Shows Monica As You’ve Never Seen Her Before
By Sam Ramsden
Ashton Kutcher Wants Danny Masterson “To Be Found Innocent” In Rape Retrial
By Jake Viswanath
Get Even More From Bustle — Sign Up For The Newsletter
From hair trends to relationship advice, our daily newsletter has everything you need to sound like a person who’s on TikTok, even if you aren’t.