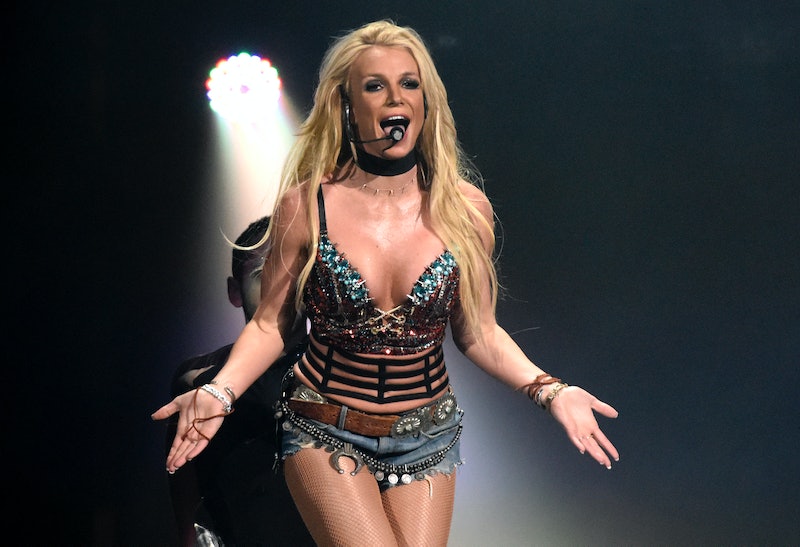 You want a piece of Britney Spears? Well, she may be getting ready to share more of her elusive self. Spears reportedly wants Oprah Winfrey to interview her, should she decide to speak out about her controversial situation. Spears’ battle with father Jamie Spears over her conservatorship, and her career-long journey with the media, has been scrutinized since the release of the New York Times documentary Framing Britney Spears. However, the film was unauthorized by Spears, so an exclusive interview with Winfrey would be a sign of Spears taking control of her own narrative.

According to Entertainment Tonight, Spears currently has no official plans to address her situation publicly, but she’s open to the possibility. “Britney has considered speaking out about her past, mostly because she doesn't feel others should tell her story,” a source told ET. "She's always hated doing interviews but if she ever takes that step, Oprah would most likely be her first choice.” However, even if she does make that decision, it wouldn’t be an easy process under her conservatorship. “There will be steps Britney would need to take before speaking out,” the source explained.

Fans have been advocating for Winfrey to interview Spears, should she want to speak out at all, ever since her landmark interview with Meghan Markle and Prince Harry. The couple spoke out about their time as senior working members of the royal family, accusing an unidentified family member of having concerns about the color of their son Archie’s skin, and bravely sharing that Markle had suicidal thoughts before their departure from Buckingham Palace. Oprah handled the historic talk with empathy while still asking the hard questions, leading fans to think she would be a natural fit to tackle Spears’ life and conservatorship.

Spears has not yet taken action to end the conservatorship, as the #FreeBritney movement is advocating for. However, the singer is actively petitioning the courts to remove her father as conservator of both her person and estate. Currently, Jodi Montgomery is serving as her temporary conservator, after Jamie stepped down for “health reasons” in 2019, while her father still co-manages her estate alongside Bessemer Trust. However, Spears’ attorney Samuel Ingham plans to file a petition and ask the court to make Montgomery her permanent conservator during the next court hearing on April 27.

While she’s not speaking out herself just yet, Spears is reportedly “much happier” these days, as fans and stars from all over the world, including Miley Cyrus and Kim Kardashian, stand in her corner. “Those closest to her feel it's because she's received such tremendous support from her fans,” the source said to ET. “The release of the documentary has inspired an outpouring of more love than ever. While she hasn't been able to make changes to her conservatorship, she’s received millions of messages from fans on social media and she feels far more understood.”

More like this
Britney Spears Celebrated Her Birthday With Loving Messages To Jamie Lynn & Her Sons
By Brad Witter
The Britney Spears Disney Princess Musical Is Finally Opening On Broadway
By Jake Viswanath
Yes, That's Lindsay Lohan's Sister Singing In The 'Falling For Christmas' Movie
By Radhika Menon
Taylor Swift Fans Sue Ticketmaster For The Eras Tour “Ticket Sale Disaster”
By Jake Viswanath
Get Even More From Bustle — Sign Up For The Newsletter