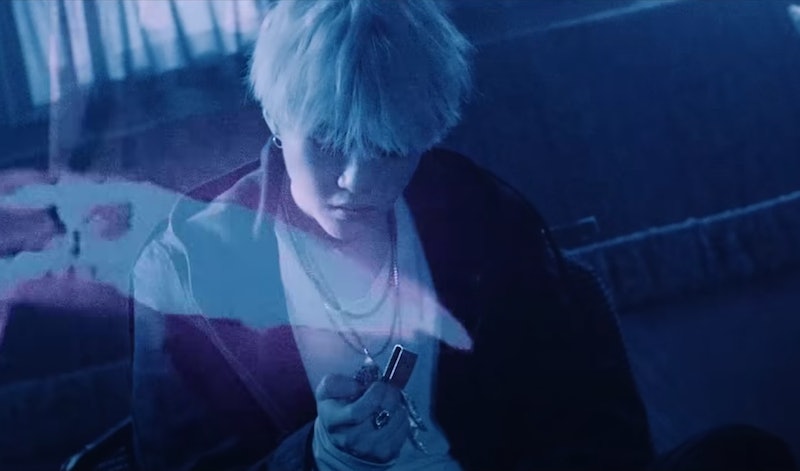 Music is the medium with which Min Yoon-gi chooses to tell his story. Since his debut eight years ago as Suga of unstoppable pop group BTS, the 28-year-old artist, has worked tirelessly to craft an open, honest space for himself through music with which he can authentically share his deepest, innermost feelings with the world.

No topic in his life off-limits when it comes to Suga’s soul-searching introspection. In his lyrics, he frequently juxtaposes the highest highs of his incendiary career with the moments of extreme sorrow he had to overcome to reach them. On the gritty, heart-pounding solo single “The Last,” for example, he reflects on his journey as a teenager battling anxiety and depression and how those feelings still sometimes resurface even now. “On the other side of the famous idol rapper stands my weak self,” he raps. “It’s a bit dangerous. Depression. OCD. They keep coming back again from time to time.”

As part of BTS’s cover story in Rolling Stone, the group conducted individual interviews that each discuss their personal growth and passions. In his solo interview released May 19, Suga described his mental health as “cold weather” and shared what brings him comfort these days. “I’m comfortable now and feeling good, but those sorts of negative emotions come and go,” he said. “It may come back in a cycle over a year, year and a half.”

He also opened up about the importance of being open and honest when talking about one’s own mental health rather than keeping it bottled up inside. “I think, for anybody, these emotions are not something that need to be hidden. They need to be discussed and expressed,” said Suga, who also releases solo material under the moniker Agust D. “Whatever emotions that I may be feeling, I’m always ready to express them now, as I was before.”

Suga credits the group’s fanbase, ARMY, and their ability to find comfort and encouragement in his music as something that brings him great joy in life. “When I hear people say that when they listen to my music, and feel comfort and are consoled by those lyrics that express these emotions, that makes me feel very good,” he shared. “It’s very encouraging.”

As the group prepares for the release of their second English single “Butter” on May 21, Suga is preparing for his first comeback since last August’s disco-infused smash hit “Dynamite.” He was unable to participate in the promotional schedule for BTS’s last mini-album, BE, as he underwent surgery last November for a long-standing shoulder injury. While he still admits there is “some physical therapy” he has to do, he shared that he’s feeling much better than in the past.

In BTS’s 2018 documentary Burn The Stage, Suga revealed he had injured his shoulder after he was hit by a car while working as a delivery boy before his debut. He told Rolling Stone that, in the year leading up to his surgery last November, he was receiving treatments and injections “almost on a monthly basis” and had difficulty moving his arms in the middle of a concert.

“It wasn’t really so much about the pain. It’s more about whether I would be able to continue doing these performances,” he revealed. “When you are actually performing, because of the adrenaline and whatever, it doesn’t really hurt. You sort of experience that the next day, that’s when you feel the pain or the discomfort or you can’t raise your arms anymore.”

Thankfully, Suga’s shoulder is on the mend and he’s now feeling stronger — both physically and mentally — than ever before. We love to see it.