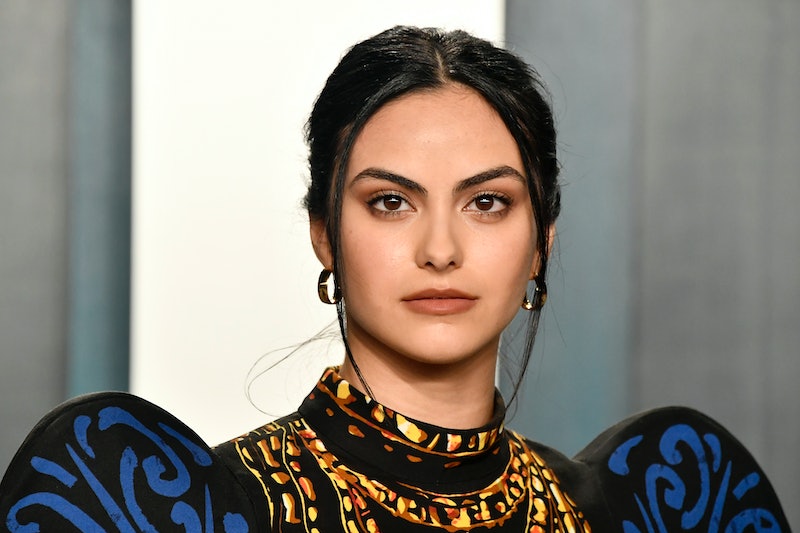 It’s officially official (Instagram official, that is): Camila Mendes and her new boyfriend Grayson Vaughan solidified their relationship on the ‘gram. The Riverdale star confirmed that she’s currently in a "long distance kind of love” with Vaughan via Instagram post on Thursday, Sept. 3. In the PDA-filled photo, Mendes and Vaughan channel their inner Ingrid Bergman and Humphrey Bogart à la Casablanca, sharing an embrace and a kiss as a small plane is chartered nearby.

Mendes and Vaughan have reportedly been dating for about five to six months now, according to JustJared. The two were photographed out and about together at Milan Fashion Week in Italy in late February, just before the COVID-19 pandemic halted travel and public events. Mendes’ friends seemingly confirmed that the two have been linked for quite some time now in the comments section, too. Actor and friend Tommy Dorfman commented, “FINALLY PUBLIC,” while Mendes’ Riverdale co-star Madelaine Petsch wrote, “I’m not crying!!!! You are!!!!”

So, who is Vaughan? He doesn’t act on teen TV, but he's pretty close to actors that do. Vaughan currently works as a photographer and has photographed the likes of Dorfman and Mendes’ Riverdale co-star KJ Apa. His Instagram serves as a lookbook of all the faces he’s worked with. He also previously worked as a model, and according to his Fashionisto page, Vaughan has modeled for the campaign pages of online retailer East Dane, men’s magazine Details, fashion brand Kenneth Cole, and more.

The cast of Riverdale recently returned to Toronto, Canada in August to resume filming on Season 4 (and 5) after the pandemic halted production in March. In her recent cover interview with NYLON published on Wednesday, Sept. 2, Mendes’ Riverdale co-star Lili Reinhart revealed that the last three episodes of Season 4 still need to be filmed, and that the cast and crew will then begin work on Season 5. "We stopped during the prom episode, so I have to fit back in that prom dress," Reinhart said. "Five months later, we're all going to be tan, maybe a little bit thicker. I certainly am."

More like this
Keke Palmer Shares The Sex Of Her & Darius Jackson's Baby
By Jake Viswanath
Hilary Duff's Husband Matthew Koma Has Her Name Tattooed On His Butt
By Jake Viswanath and Stephanie Downs
Channing Tatum Calls Walking Away From Relationship With Jenna Dewan “Terrifying”
By Radhika Menon
Paris Hilton & Carter Reum’s Relationship Timeline Includes A Surprise Baby Boy
By Bustle Editors
Get Even More From Bustle — Sign Up For The Newsletter
From hair trends to relationship advice, our daily newsletter has everything you need to sound like a person who’s on TikTok, even if you aren’t.