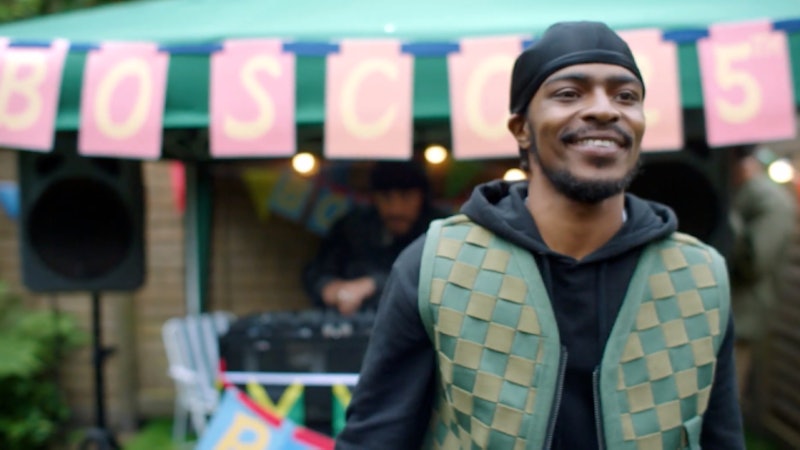 Following the success of her hugely popular debut novel Queenie, award-winning writer Candice Carty-Williams has penned a brand new BBC drama series, Champion. Set in South London, the series will follow the rise and fall of a fictional UK rap sensation. Described as “a love letter to Black British music,” the cast of the musical drama has just been announced. Here’s everything you need to know about Champion, including who is set to star in the series.

Champion will explore what happens “when fame collides with family,” the official synopsis states. Bosco is an up-and-coming rap star when he’s arrested and sent to prison. On arriving home, he is ready to dominate the music industry once again, but discovers his sister Vita has now become a performer in her own right.

“Since she can remember, his younger sister Vita has been his personal assistant, running around after him, getting him out of trouble and hiding his various misdemeanors,” reads the synopsis sent to Bustle. “But when Vita’s own talent is discovered by Bosco’s rival, Belly, she steps out of her brother's shadow to become a performer in her own right, setting the Champion siblings against one another in their quest to both reach the top spot in the charts and to be the star of the family.”

The sibling rivalry will split the Champion family down the middle “as they go head to head in a very public and messy battle.”

Following the announcement of the new drama, Carty-Williams said, “Champion is a celebration of Black music and a Black family, however fragmented that family might be.” As a longtime fan of grime, UK rap, and neo-soul, Champion has given the author the opportunity to bring the “life and texture” of these genres to life.

Champion and is being produced by Blue Story’s Joy Gharoro-Akpojotor, who describes the project as “special.” Other writers include Isis Davis (Killing Eve), Emma Dennis-Edwards (Casualty, Eastenders, Ragdoll), Ameir Brown, and Edem Wornoo. Ray BLK also serves as music executive alongside the BRIT and Mercury Prize nominated Ghetts, who will help bring the series’ original music to life.

Champion is currently in the midst of production, and there’s currently no release date. Once it does air, the series will be available to watch on BBC One and BBC iPlayer in the UK and Ireland, and on Netflix worldwide.