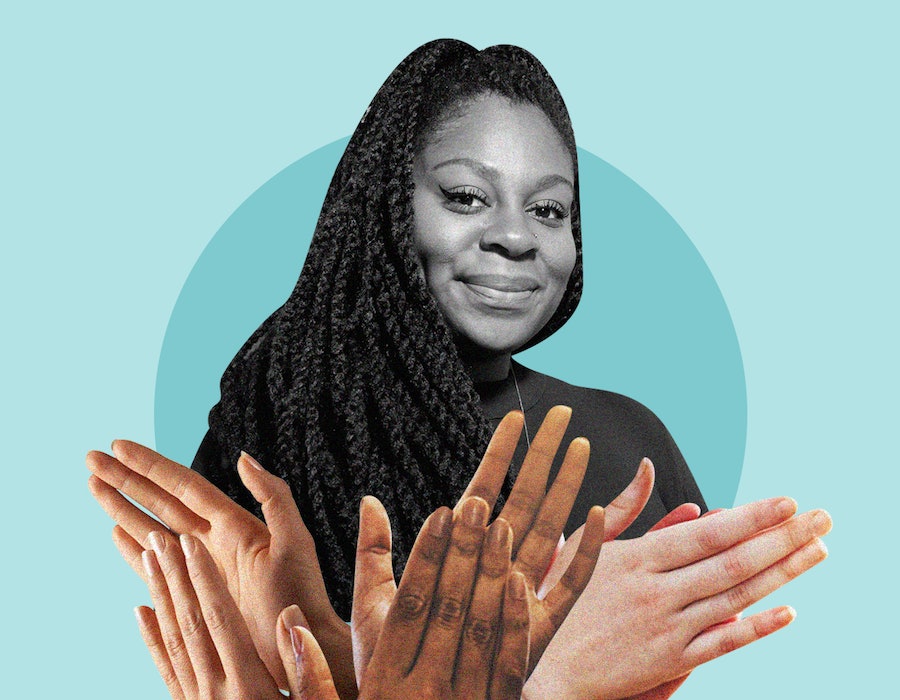 Welcome to Do It For The Applause, a series in which we ask performers, writers, business leaders, and public figures to think about the notion of applause and what it means to them. Today, we hear from journalist, screenwriter, and author Candice Carty-Williams.

The period leading up to the publication of your first book is stressful for any author, but if you’re already working in the industry, and have watched countless novels rise and fall in bestseller charts over the years, that stress reaches another level. When Queenie came out in March of 2019, Candice Carty-Williams was working as a senior marketing executive for Vintage Books, having come from HarperCollins and, before that, Random House. In other words, while she knew how much there was to look forward to on the eve of a book launch, she also knew how much there was to worry about.

I ask Carty-Williams about that pressure, which was no doubt exacerbated by the fact that Queenie featured on just about every "books to watch out for in 2019" list before its publication. Was it a lot to deal with? "Well, for sure, because you're just like, what if it flops?" she says.

Queenie was far from a flop. It shot to number two on the Sunday Times Bestseller List in a matter of days and has been described as a "thrilling novel for our times" by author and Booker Prize winner Bernardine Evaristo.

Despite Queenie's runaway success, Carty-Williams has always had the same hope for her debut. "I wanted young women, young Black women, to feel less alone in what they were going through," she says. "And to have someone for them to see, and to see themselves in. That is what I've always wanted to do."

Before Queenie, Carty-Williams had already made a name for herself in the UK media scene, with bylines in the Guardian, BEAT Magazine, and Vogue, among others. On top of that, at the age of just 23, she set up the Guardian and 4th Estate BAME Short Story Prize — one of the achievements she is most proud of, she says. But fast forward to now, post-Queenie, and the buzz around Carty-Williams is bigger than ever. She has appeared on numerous podcasts and panels, been a guest on shows such as BBC Breakfast, and travelled to America to speak about her work. When I meet Carty-Williams, we're at the The Women Of The Year Awards, as she has recently been selected to join the 2019 cohort. But after all that, she still struggles to accept praise. Why is that?

Her family, for one, she tells me. "My nan calls Queenie my 'little project,'" the author says, laughing. None of her family have read the book — "they’re not readers," she explains. "So, when people ask me why I'm humble, I'm like, that's why."

Other than that, she explains, it's because she’s faced a lot of "negative reinforcement" throughout her life. "And so now I'm an adult, I'm like, 'What? You can't be talking about me. That's too nice.' I'm very grateful, but I just don't internalise it."

Between the canapés and flashing cameras, I manage to steal a few minutes of the author's time before she's whisked away to mingle with the other Women Of The Year. We chat about reader reviews, the joy of being told you have "good energy," and the reason why ours is a generation suffering from chronic imposter syndrome.

The readers. Hearing that they connected with something. Because, first of all, there is so much for us to choose from all the time. I never know what to choose. So the fact that you've seen it, you've picked it up, and you've connected with it in some way is amazing. Because there is such option paralysis when it comes to books. So that is what I would say: the readers. Because they don't have to read it. Sometimes I start reading about a book and I'm like, "No." So if people have finished it and have been like, "I have just immediately, this second, finished your book, and I just wanted to say that," that's amazing to me. [It shows] that you've properly given a shit.

Not going to get texts, so that doesn't matter. [A] standing ovation is quite stressful because I don't like public speaking. So I think reviews are nice. Reviews are good. I remember my editor being like, "Please can you ask people to review it on Amazon?" And I was like, "No because that's really weird for me." But I was on Amazon the other day, looking up when a book was published, and I saw "If you like this, you're sure to like Queenie." And I saw that I had loads of, like, four and a half stars and I had a hundred and something reviews and I was like, "Who's done that? That's really nice." That meant a lot to me because I was like, I haven't made anyone do that. And that's people from book communities just being like, "I like this."

I love when someone says I have nice energy. Or just someone just being like, "I'm glad you're here." I love that, when someone says that to me. It's very thoughtful. It's just like, "My evening or day wouldn't have been as nice if you hadn't been here." The energy one though, I like that. Because having good energy I think is important.

My weight fluctuates quite a lot, and when people say "You've lost some weight, you look really good," I'm always like, "Don't talk about that, because you don't know why I've lost weight. You don't know if it's because I've been ill." And also I don't correlate being thinner with being better looking, so I'm always like, "fuck you." So that is the one that I hate. I hate that so much. The people that are close to me would never do that and you find the people who think the way you do.

Why do you think so many of us find it difficult to accept praise?

I think, with this generation specifically, we are so in our heads. And a lot of the stuff in there is self critical. The prior generation just kind of got on with things. Obviously they made mistakes, but I think we spend so much time analysing ourselves and I don't know many people that analyse themselves who are just like, "Yeah, but I'm just the best." And, as we know, negativity feeds on itself. So it's really hard, then, to break that with someone being like, "Oh you look nice today", because we would be like, "Well I saw 10 other people who look nicer than me on Instagram this morning." I mean, look, we just need to think less and do more, but it's hard.

Which person in your industry do you think deserves applause or more applause right now?

I’m going to say Sareeta Domingo, whose collection of stories around love, sex, and desire by underrepresented writers has just been announced. I haven’t ever connected as much with a good love story because I’m constantly trying to find one that centres someone like me. And now, Sareeta is gathering a whole collection of them! Sareeta is also the most die-hard fan of books. She’s very inspiring and I’m looking forward to the industry and readers seeing what she can do.

More like this
Everything To Know About The 'Daisy Jones & The Six' TV Series
By Maxine Harrison and Brad Witter
Your Guide To Watching 'Everything Everywhere All At Once' In The UK
By El Hunt and Sophie McEvoy
The Song At The End Of 'The Last Of Us' Ep 1 Has A Deeper Meaning
By Sophie McEvoy
Gen Z Are Twice As Likely To Identify As Queer, According To New Data
By Sam Ramsden
Get The Very Best Of Bustle/UK
Sign up for Bustle UK's twice-weekly newsletter, featuring the latest must-watch TV, moving personal stories, and expert advice on the hottest viral buys.