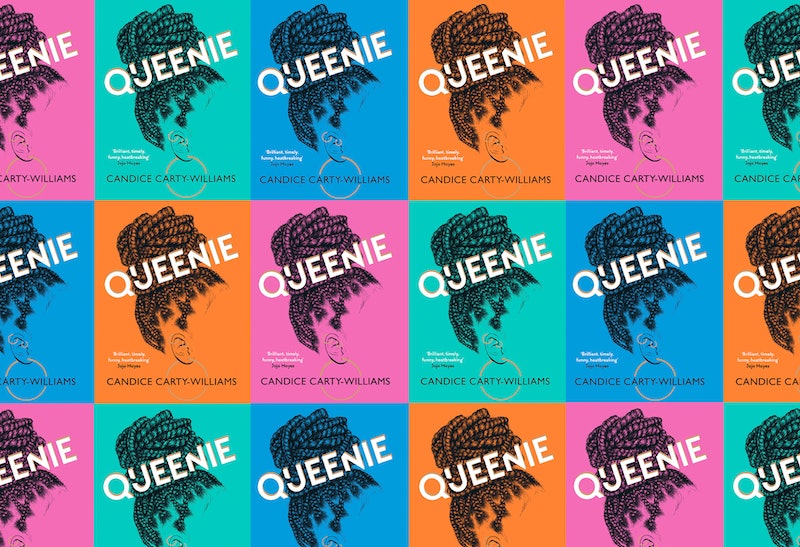 Everyone is talking about London author Candice Carty-Williams' debut novel Queenie. Out April 11, it follows a British-Jamaican woman working in journalism as she tries to navigate her 20s. It's hilarious, political, and really hones in on some critically important topics. A laugh-out loud story about mental health, working life, friendships, relationships, and all the other messy intricacies life throws at a 20-something Black British woman — it's the novel everyone needs to add to their reading list this year.

After landing a six-figure publishing deal following a bidding war involving multiple publishing houses, Carty-Williams is definitely one to watch and I've no doubt she will soon be taking the British literary world by storm.

The nuanced exploration of Black-British womanhood in Queenie is something everyone needs to engage with. There's still a desperate need for books like Queenie which tell the stories of Black women and centre them as lead characters. Statistics from the The Bookseller show, "of the thousands of titles published in 2016 in the UK, only a small minority—fewer than 100—were by British authors of a non-white background."

Seeing yourself represented in all forms, including literature is so important. Reading a story told by someone who looks like you with a lead that looks like you too is so refreshing and something Black British women don't often get. Carty-Williams is really shaking things up with this novel and proving why representation matters so much.

One of the key topics in Queenie is Black women's mental health, a critical conversation that should be explored more, especially in literature. Talking to gal-dem, about the theme of mental health in the book, Carty-Williams' said: "Our lives are textured with mess and shit and a lot of pain. I really wanted to show people who aren’t from the same background that sometimes [this is] the day-to-day reality and black women are in pain."

Speaking to The Badger, the 29-year-old explained how literature is a useful tool to delve into these hard but necessary conversations. "I think it can make some truths that are too painful to bear both accessible and palatable. I think it might also make truths easier to write, when you as the author can give yourself some distance from it. I’m not Queenie, not by any measure, but I see the world through the same lens as her and have had similar experiences."

Queenie has already been praised by some giants of the literary world including journalist and romance novelist Jojo Moyes, and author and editor of The Good Immigrant, Nikesh Shukla, proving it's already shaping up to be one of this year's hottest novels. Hopefully this is the first of many books by Candice Carty-Williams. She is truly breaking down barriers and proving why the voices of Black women need to be amplified in British literature.