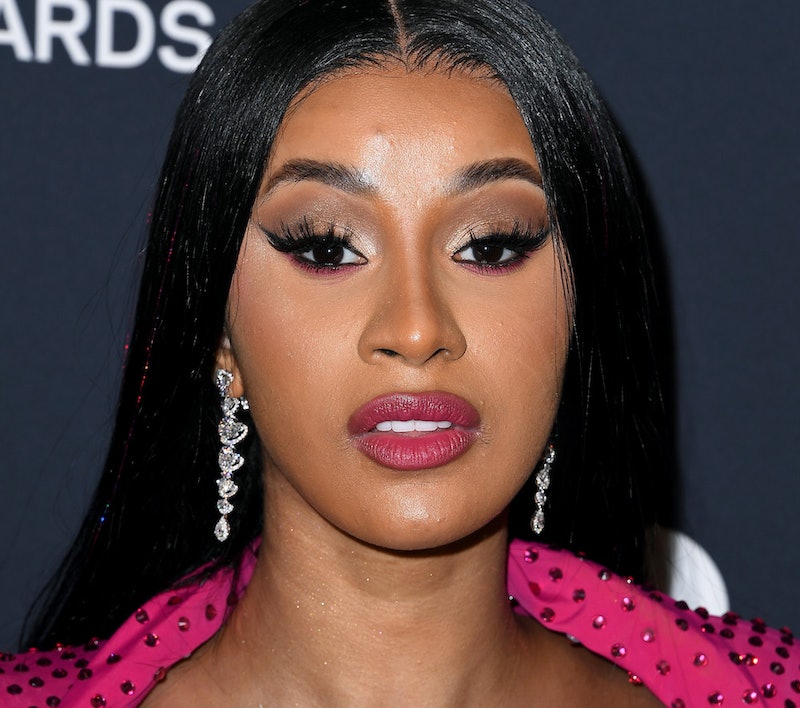 Sorry, but Cardi B isn't here for racism in the luxury fashion space. On Monday, Oct. 26, the rapper took to Instagram to call out racially biased comments about Black female rappers owning designer handbags. More specifically, the "WAP" artist addressed remarks about the authenticity of her expansive Birkin collection. She fired back at claims that female rappers have depreciated the value of the handbags, which were considered "exclusive" before women of color began purchasing them.

“I've seen this tweet that had me and other female rappers on it, and they were talking about if we could get Birkins from the Hermès store," Cardi said in the Instagram video. "It was also saying how we depreciate the value of a Hermès Birkin bag, and I find that really interesting." The rapper also clarified that she "definitely could get a [real] bag," adding that she got four new Birkins yesterday alone.

The rapper went on to explain that female hip-hop artists do not lower the value of designer items. On the contrary, they contribute to the massive success of those brands. "They're saying we're depreciating the value, [but] actually, we add value," she said. "When we mention brands in hip-hop, shit [goes] up." Citing her songs "Bodak Yellow" (which referenced Christian Louboutin) and "I Like it Like That" (which referenced Balenciagas), Cardi said her hits actually resulted in a spike in sales.

The bottom line? Cardi wants people to stop with the double standards. "Why when a Black girl [or] a Hispanic girl [has] a bag you have to question it? 'Oh is it fake?' or 'She's a scammer.’ There's a lot of boss-ass b*tches out here." The rapper closed out the video by encouraging her followers to feel "swaggy as f*ck," regardless of whether or not they have designer items. "Don't ever feel like you gotta compare yourself. Don't compare yourself to nobody [on] the internet," she said. "This internet sh*t is fake. You still a bad f*cking bad b*tch."

The video comes after the rapper shared a glimpse of her Birkin collection on Instagram last week. In various colors and various prints lined neatly on a shelf, Cardi captioned the post, "Pick a color."