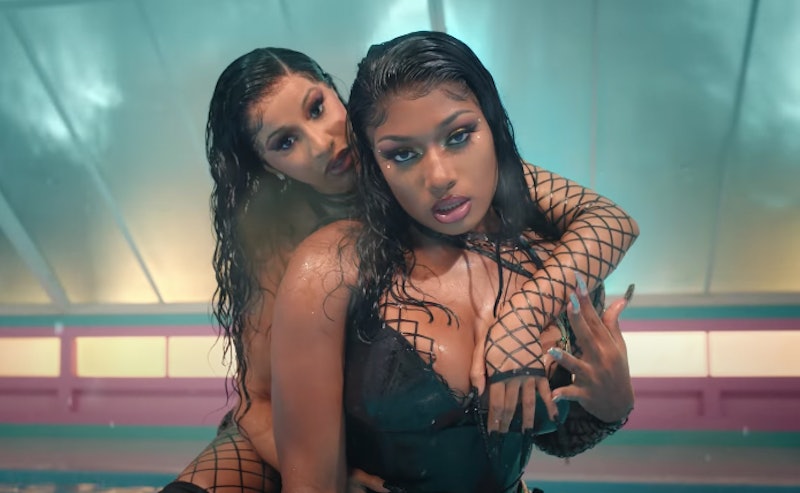 When Megan Thee Stallion said “now make it rain if you wanna see some wet ass p*ssy” in her verse for “WAP,” her latest collaboration with Cardi B, she might have actually meant it literally — from a meteorological standpoint. Ahead of the rainy season, Cardi B debuted new “WAP” merch on Aug. 18 — and the collection is made for the splash zone. Three different raincoats and two umbrellas in an assortment of colors joins the collection of crop tops, hoodies, exercise wear, and lounge wear that will keep “WAP” fans dry all winter long.

The mid-length “WAP” raincoats come in a transparent pink, black, and white and retail at $125 each. Giant “WAP” lettering is spelled out across the raincoat just below the chest. The “WAP” umbrella, which comes in either black with pink “WAP” lettering on top or pink with white lettering, both retail at $25 each. A “WAP” raincoat and umbrella would certainly come in handy during the winter, when the cloudy overcast emits heavy rain from the top, making it drop, so much so that you’ll need a bucket, need a mop, and then wap, wap, wap into a puddle with some rain boots on, making it sound like macaroni in a pot.

Cardi and Meg debuted “WAP” on Aug. 7 with an accompanying music video that featured quite a few surprise appearances. Normani, Rosaliá, Rubi Rose, Sukihana, Mulatto, and Kylie Jenner (much to the surprise and dismay of some Cardi and Meg fans) all made cameos in the luxe, animal-filled music video directed by Colin Tilley. Cardi explained the cameos on Apple Music’s “New Music Daily” and said she and Meg wanted “a lot of different females” for the video and “not just female rappers.” She said, “These are the girls that I personally like. I really feel they are going to go mainstream.”

“WAP” debuted at No. 1 on the Billboard Hot 100 on Aug. 17, as the first female collaboration to hit No. 1 with a record-breaking first week stream of 93 million listeners, per Billboard. It marks Cardi’s fourth No. 1 and Meg’s second No.1 hit overall. The collaborators celebrated the achievement on Instagram. “Breaking pop records! HIP HOP DID THAT !!” Cardi wrote in a post. “I’m so proud of us.” Meg wrote in her post, “Me and cardi just got off the phone screaming.”

A record-breaking achievement warrants some new (and appropriate) "WAP" raincoats and umbrellas. Or, at the very least, a t-shirt or sweatshirt.