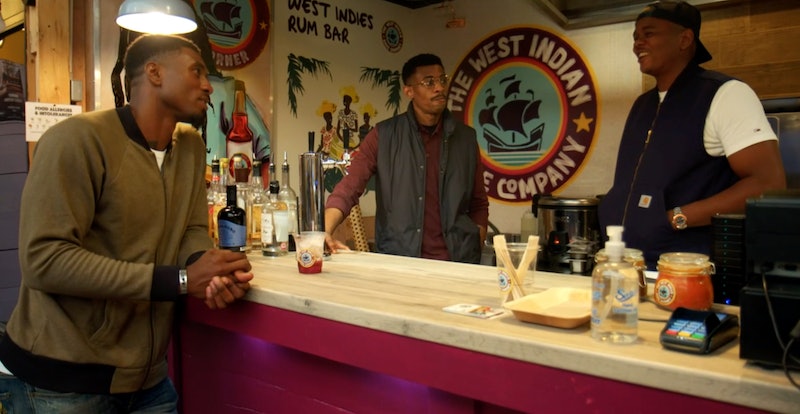 While Love Island 2019's official winners were Amber Gill and Greg O'Shea, in our mind Ovie Soko was the real hero of the series. Since finding fame on the ITV2 show, Ovie has been an increasingly regular feature on our screens, and this week sees him exploring the darker side of the whole experience in a BBC documentary titled Ovie: Life After Reality TV. The investigative programme features other reality TV stars, as well as Ovie's family and friends, to get their take on the show and its long-term impact. There's a standout appearance from Ovie's older brother and chef Raymond, too – and if you're wondering where Ovie's brother's Caribbean food stall is, read on.

As we see in the documentary, The West Indian Bake Company is a family business run by Ovie's brother and cousin, and it's located in the Mercato Metropolitano in Shoreditch, London. What's on the menu? The food stall serves up South Caribbean favourites, including jerk chicken, salt fish, plantain and candied yams.

The website states that the recipes are passed down from their great grandma, and they've been cooking them for over 20 years. "We have perfected how to season, marinade, and cook each individual dish with care, to create the most flavourful amazing taste of back home. With just one bite, you can feel and experience the love and emotion that goes into our cooking." Ovie has been known to make an appearance in the kitchen there on occasion, too.

Through the course of the documentary, Soko meets with other big names from the world of reality TV, including I'm a Celebrity winner Vicky Pattinson, Love Island power couple Alex and Olivia Bowen, and The Only Way Is Essex’s Mario Falcone, who all share their experiences of working in a notoriously ruthless industry.

The crux of the documentary sees Ovie question whether to pursue a career in entertainment, or stay true to his professional basketball roots. Spoiler alert: he's recently signed a one-year deal with the French team Le Mans Sarthe Basket. That said, he also published a book in October – You Are Dope: Let The Power Of Positive Energy Into Your Life – and appeared on Elizabeth Day's podcast How To Fail in September, discussing his love of life coaching. So, we suspect (and hope) there's much more to come across the board from Ovie Soko yet.