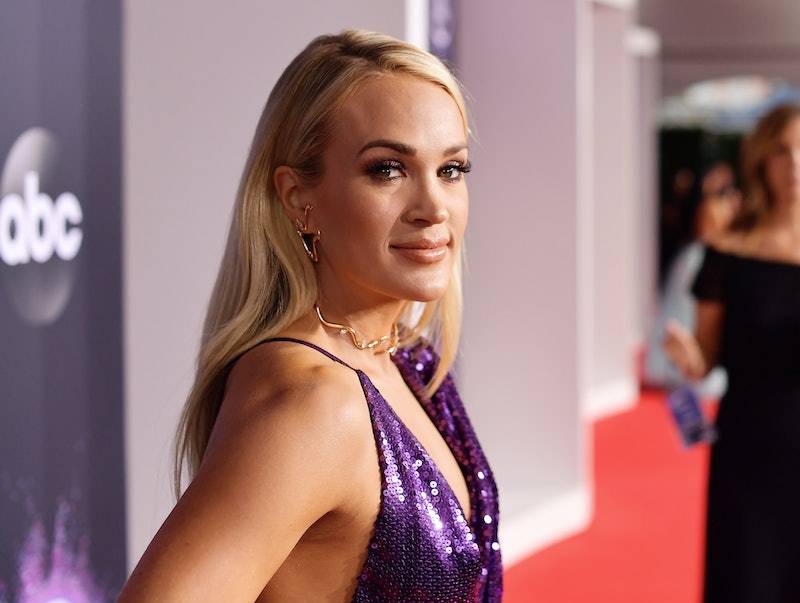 Carrie Underwood’s Twitter activity is causing a major stir online. The country music star is facing backlash after liking a video that was tweeted out by conservative commentator Matt Walsh on Aug. 12. In the clip, Walsh criticized mask mandates for children at a Metro Nashville Board of Education meeting, calling the mandates “child abuse” and comparing them to “wearing muzzles like rabid dogs.”

After coming at the school board for a lack of “evidence, data, science, common sense, and basic human decency,” Walsh insisted that forcing children to wear masks is no different than forcing them to wear helmets. “How would you respond to a parent who forced his kid to wear a football helmet every day, all day, for fear of falling coconuts and meteors?” Walsh said. “Your kid is almost as likely to die of COVID as he is from a rock from the sky.”

He continued, “If you saw that, you would say to that parent that he is abusive, that he is forcing his kid to participate in this utterly insane charade in order to satisfy his delusional psychotic hypochondria.” Elsewhere in his speech, Walsh compared child mask mandates to “Munchausen by proxy,” which is a psychological disorder that involves the exaggeration or fabrication of illnesses or symptoms by a caretaker.

After Underwood’s followers noticed that she liked Walsh’s anti-mask rant, some took to Twitter to express their support for the “Before He Cheats” singer while others expressed disappointment. “It’s not just that Carrie Underwood liked an anti-mask tweet. It’s that Carrie Underwood liked an anti-mask tweet from Matt Walsh, one of those most negligently histrionic voices on the topic of protecting kids from COVID,” Twitter user Jeremy Hooper wrote.

Several others on social media took the opportunity to remind people that while Underwood may be an anti-masker, there’s another country star who has helped slow the spread. “Dolly Parton helped fund a vaccine to fight off COVID. Carrie Underwood is helping spread anti-mask & antivaxx misinformation,” Twitter user @Lady_Star_Gem wrote, referring to the $1 million donation Parton made toward the development of the Moderna vaccine. @krystazerance echoed that sentiment, tweeting that Parton is the only country singer they can trust.

Toward the end of Walsh’s speech, he suggested that child mask mandates only exist to make people “feel better politically.” However, the science suggests otherwise. According to the American Academy of Pediatrics, the amount of COVID-19 cases among children is steadily on the rise, with more than 121,000 child cases reported in the U.S. last week. This is more than 14 times greater than the number of cases reported in June.

“This is happening before school starts. Schools are opening now,” Dr. Peter Hotez, dean of the National School of Tropical Medicine at Baylor College of Medicine told CNN’s Jake Tapper on Aug. 17. Hotez also that 80 to 85% of the population will need to be vaccinated to truly interrupt the spread. “This is just the beginning, unfortunately,” he added.

More like this
Khloé Kardashian Is Reportedly Dating A Private Equity Investor She Met Through Kim
By Jordyn Tilchen and Jake Viswanath
How To Apply For 'Survivor' & Tips On How To Get Cast
By Meg Walters
Here’s Everything You Need To Know About Operation London Bridge
By Bustle UK
10 Photos Of William, Harry, & Their Cousins Honoring The Queen Together
By Stephanie Topacio Long
Get Even More From Bustle — Sign Up For The Newsletter