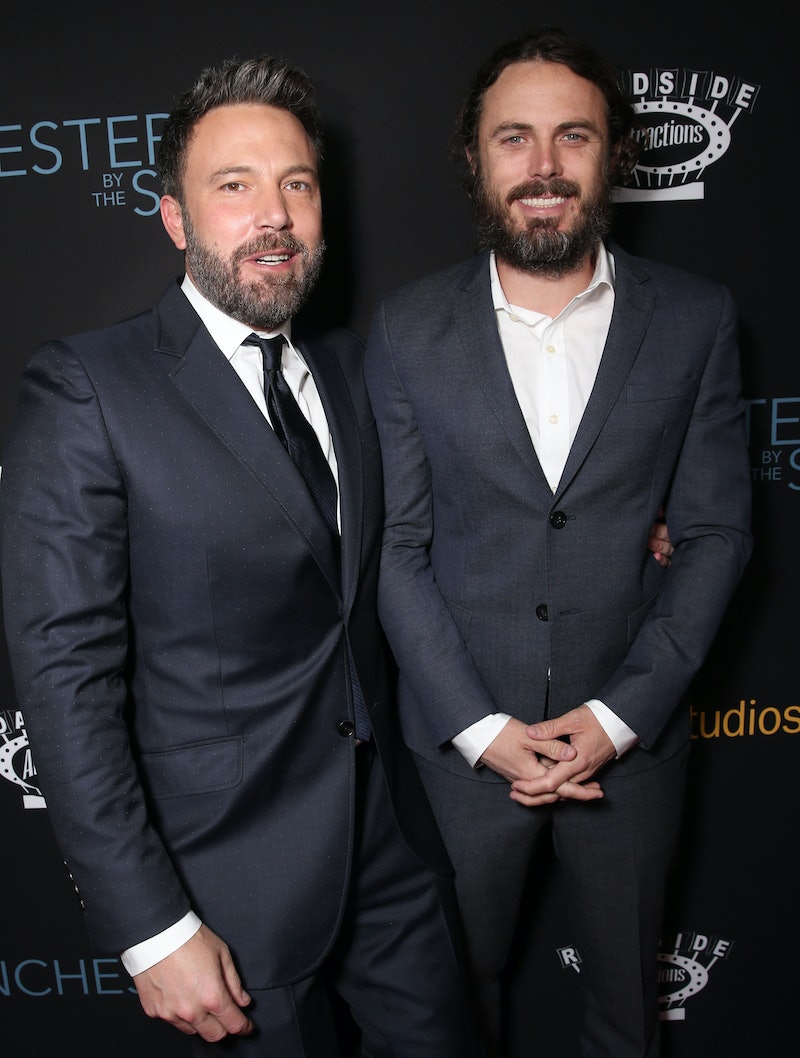 The identity of the man in the memes surrounding Ben Affleck's breakup remains a mystery. Casey Affleck denied tossing Ben's Ana de Armas cutout during a Jan. 21 Entertainment Tonight interview, sharing that he knows all about the viral images but "definitely" wasn't involved. In fact, he had nothing but good things to say about the Knives Out star.

On Jan. 18, People reported that Ben and de Armas had called it quits after nearly a year together, and later that day, the Ana de Armas Updates Twitter account shared images of a mystery man throwing the life-sized cardboard cutout of the actor — given to Ben by de Armas and his children as a prank last June — in the garbage. Despite speculation that it was him in the photos, Affleck told ET that he was not part of his brother's post-split cleanup. "No, that’s not me," the Oscar winner said. "And I can’t even really say if they have totally broken up for good or whatever."

While he may not be behind the viral photos, Affleck did reveal that he was aware of the memes social media users have made out of the moment. "A bunch of people sent that picture to me, and I was gonna tweet some, like, joke, response or something," he revealed. "And then I couldn’t think of one and a joke didn’t seem appropriate. And I don’t have Twitter so that wasn’t going to work. But it definitely wasn’t me."

Affleck was reluctant to confirm that his brother and de Armas had called it quits — "I would leave that to them to speak to," he told the outlet — but he did share plenty of kind words about the two of them with ET. "I think that Ana is just the sweetest, funniest, smartest, most charming person. I think she won't have any problems meeting somebody else," Affleck added, describing her as "a catch" and praising her talent as a performer. "I think she's really, really great. ... She's just incredibly sweet, such a sweet person and so talented."

The Oscar winner noted that he wasn't worried about his brother in the wake of the split, either. "I'll be there to carry Ben through it, but I don't think he'll have any problems," Affleck said. He did, however, seem to suggest the two should reconsider their split, nothing that his advice for them would be to "think long and hard about it, because quarantine is not fun if you're single."

Ben and de Armas were first spotted together toward the beginning of the coronavirus pandemic, in March 2020, on a romantic trip to her native Cuba, before traveling to Costa Rica and then returning home to Los Angeles. Though the couple was frequently photographed together walking their dogs around LA, they rarely spoke about one another publicly. Additionally, de Armas shared only a few photos of the actor on her Instagram page, but she reportedly had a good relationship with his children, Violet, 14, Seraphina, 11, and Samuel, 8. She joined them on family vacations and helped them prank their father with the now-infamous cardboard cutout.

However, People reported in January that the pair had decided to call it quits because they wanted different things. "This is something that was mutual and something that is completely amicable," a source told the outlet. "They are in different points in their lives; there is deep love and respect there. ... They are both happy with where they are in their lives."

They may no longer be together, but #BenAna will always be remembered for the memes they gave the world.

More like this
Vanessa Hudgens Is Reportedly Engaged To Cole Tucker
By Jake Viswanath
Pamela Anderson’s Dating & Marriage History Could Be Its Own TV Series
By Jake Viswanath
Keke Palmer Shares The Sex Of Her & Darius Jackson's Baby
By Jake Viswanath
Everything You Need To Know About Kanye's Post-Kardashian Dating Life
By Bustle Editors
Get Even More From Bustle — Sign Up For The Newsletter
From hair trends to relationship advice, our daily newsletter has everything you need to sound like a person who’s on TikTok, even if you aren’t.