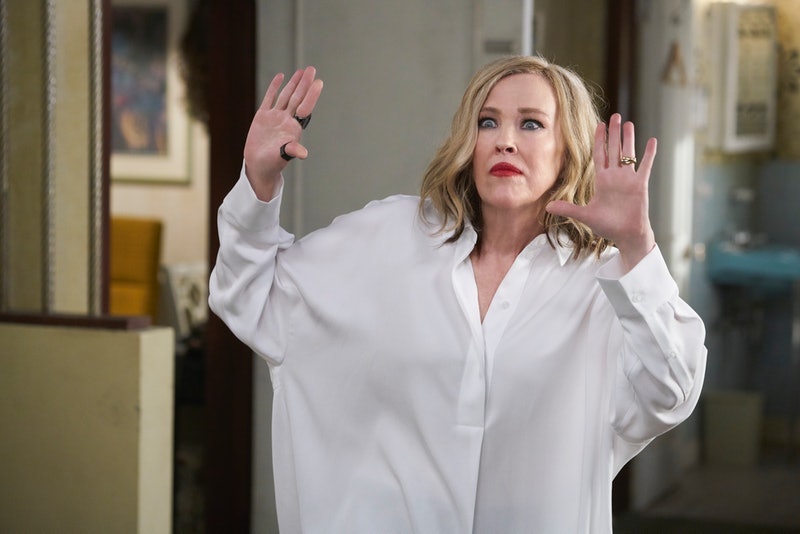 It's hard to imagine what the world was like before Moira Rose waltzed into our lives; however she isn't the only memorable character that Schitt's Creek star Catherine O'Hara has portrayed over her impressive TV and movie career. Whether you've realized it or not, this Hollywood legend has dominated the screen — both big and small — for decades. One might even say she's played more iconic characters than Moira Rose has wigs.

O'Hara's popularity reached new heights during her time on Schitt's Creek. Between her character's unforgettable wardrobe and head-scratching accent, Moira proved to be a central part of the show's unique world. Her one-liners alone were worth tuning in for, thanks to O'Hara's one-of-a-kind intonations — a skill that helped win her the Emmy for Outstanding Lead Actress in a Comedy Series this year. (Schitt's Creek, as a whole, walked away with a total of nine Emmys in 2020 celebrating its final season.)

To say that Schitt's Creek, and in turn, Moira herself, are beloved would be an understatement, which makes the show's end all the more difficult to bear. But if you're sitting around still missing your weekly dose of Moria goodness, take heart in knowing that there are still countless TV shows and movies that star O'Hara that are more than worth your time. So grab your finest bottle of Herb Ertlinger fruit wine and dive headfirst into this woman's impressive resume.

In Beetlejuice, O'Hara totally stole the show as Delia Deetz, stepmother to Winona Ryder's Lydia and decorator/sculptor extraordinaire. Her rendition of "Day-O (Banana Boat Song)" is nothing short of iconic, upping the game of dinner parties everywhere. (It's also the actor's favorite scene as well.)

However, what fans may not realize is that O'Hara didn't even audition for the part because she accidentally missed her meeting with Tim Burton. "I was so late. I got lost," O'Hara recalled about her Beetlejuice audition during an interview with The New York Times. "I finally, two hours late, got back to Burbank. There was a note on the door from Tim Burton. It said, 'I’m sorry. I waited as long as I could.' I go back home to Toronto. A few weeks later they offer me the part."

Where to stream: Peacock

If you loved O'Hara's chemistry with Eugene Levy on Schitt's Creek, then you owe it to yourself to check out some of their previous projects together (yes, there are several). This includes the 2003 mockumentary comedy A Mighty Wind, where they played former singing duo Mitch and Mickey, who reunite for a folk music festival, leading to some pretty cooky results. (Fun fact: the song they perform together in the film, "A Kiss at the End of the Rainbow," was nominated for an Oscar, and the two performed at the ceremony in character.)

Believe it or not, O'Hara played the role of Sally in this beloved Halloween/Christmas hit. Her voice may be a little difficult to recognize given Sally's wispy tone, but rest assured it's O'Hara's vocals behind the scenes, bringing this clever rag doll to life in more ways than one.

Where to stream: Disney+

This 1986 film finds O'Hara showcasing a southern accent, but the real draw to the movie is seeing her and Meryl Streep on screen together. If you want to see two Hollywood legends showcasing their talents, look no further.

Prior to Schitt's Creek and A Mighty Wind, O'Hara and Levy starred in this classic 2000 mockumentary about a dog show, playing married couple Gerry and Cookie Fleck. Their characters are a far cry from the business savvy and fame hungry John and Moira Rose that we know today, but their comedic timing and on-screen chemistry was just as palpable back then as it is now.

Surprisingly, though, Levy originally had O'Hara in mind for another part in the project. "You had me in mind for another role, and I actually asked if I could be your wife. You were a single guy, to begin with," O'Hara recalled during a recent interview with Vulture. In the end, it seems they were meant to be together.

Forgetting to bring one of your children on a family vacation is generally frowned upon, especially during the holiday season, yet O'Hara somehow still managed to make Kate McCallister at least somewhat likable in Home Alone.

And as for the sequel — again, only O'Hara could make a character who lost track of their kid not once, but twice, still seem redeemable. Also, let's not forget how she slapped Tim Curry's character across the face. We have no choice but to stan.

A few years ago, O'Hara said she's still connected to the role, recalling a sweet reunion with her on-screen son Macaulay Culkin. "I ran into Macaulay once and he said, 'Mom!' and I said, 'Baby!'" she told InStyle in 2018. "He looked great and was doing well, and I was happy to see him."

Starring opposite Jim Carrey in the 2004 film adaptation of the popular book series, O'Hara tackled the role of Justice Strauss who lives next door to Count Olaf. She also rocked a pretty serious wig as part of her judge attire that not even Moira would attempt to pull off. (Just kidding, she totally would.)

O'Hara also served as a vital role in the 2017 Netflix adaptation, though she appeared as a completely different character. In this project she played the part of Dr. Georgina Orwell, Count Olaf's former lover who is arguably just as ruthless and conniving as the man himself. Believe us when we say that you'll love to hate her.

Though she only appeared in four episodes total during the show's second and third seasons, O'Hara's portrayal of Lisa Kimmel's boss Carol Ward is unforgettable and offers further proof that her talents know no bounds.

Is there a better person out there to play Kenneth's mother, Pearline? That's a rhetorical question, of course, because the answer is obviously no.

Where to stream: Peacock and Amazon Prime

O'Hara and Levy's on-screen journey began with this sketch comedy show, which — much like Saturday Night Live — allowed for them to portray a wide range of unique and wildly different characters. “I know that doing SCTV really opened the doors,” O’Hara told Vanity Fair in May. The series ran for a total of six seasons and earned her an Emmy for writing — which she won alongside Levy. The rest, as they say, is history.

More like this
Here’s Everything Coming To & Leaving Netflix In February
By Jake Viswanath
At 28, Rosie Perez Risked Her Career To Stop Playing Stereotypes
By Gabrielle Bondi
'The Queen’s Gambit' Season 2 Tweet Wasn’t From Anya Taylor-Joy
By Mary Kate McGrath, Jack Irvin and Grace Wehniainen
Pamela Anderson’s Dating & Marriage History Could Be Its Own TV Series
By Jake Viswanath
Get Even More From Bustle — Sign Up For The Newsletter
From hair trends to relationship advice, our daily newsletter has everything you need to sound like a person who’s on TikTok, even if you aren’t.