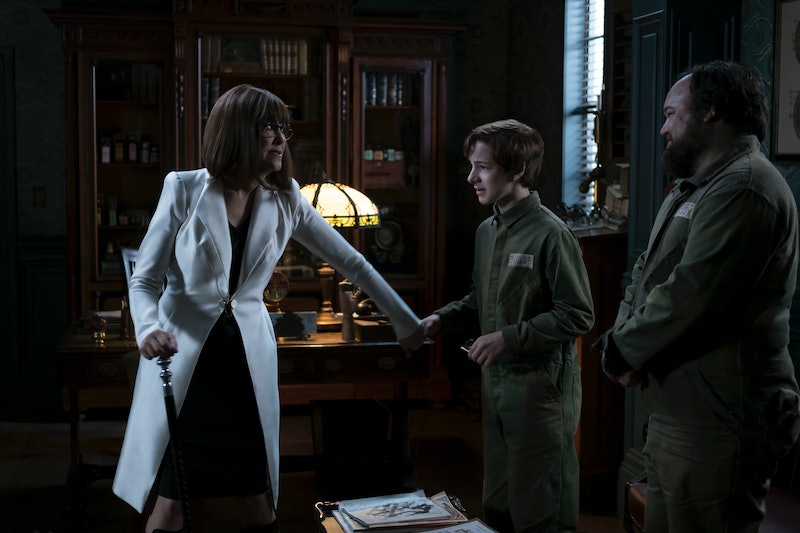 By the time that the three Baudelaire orphans — Violet, Klaus, and Sunny — get to Lucky Smells Lumbermill in Paltryville in Episode 7 of Netflix's A Series of Unfortunate Events, the children have already been through a lot. Yet, they meet someone in the run-down town that's almost comparable in evilness to Count Olaf — Dr. Georgina Orwell, who is a suspicious eye doctor and the former lover of Olaf. Catherine O'Hara portrays this foul character and the actress couldn't be better suited to play opposite of Neil Patrick Harris' Olaf.

I consider O'Hara's career to be one of the most eclectic, fascinating, and enviable of any actor out there. She not only was Kevin McCallister's mom in the Home Alone franchise, but she's a regular presence in Christopher Guest films like Waiting for Guffman, Best in Show, and For Your Consideration. That's not even mentioning tons of her other projects, including working with Tim Burton in the movies Beetlejuice, The Nightmare Before Christmas, and Frankenweenie. O'Hara's acting career is the stuff of legend.

The Canadian actress, who started her career doing improv with Second City, has a knack for playing characters with nasty and comedic streaks, which means O'Hara was a fabulous pick for Dr. Orwell. She has proven over the years that she fits into the stylized world of A Series of Unfortunate Events and that she is extremely capable of going toe-to-toe with Harris in regards to evil humor.

Yet, I've neglected to indicate the part that makes her casting truly magical. As I referenced in the beginning, there was the not-so-successful movie adaptation of A Series of Unfortunate Events that starred Jim Carrey and Meryl Streep. Well, O'Hara was in that version too. She portrayed the kindhearted Justice Strauss, who Joan Cusack portrays in the Netflix version.

One more connection that should also be noted is that the two episodes in which O'Hara's character is present were both directed by her husband Bo Welch. So, while Dr. Orwell hypnotizing the employees of Lucky Smells hasn't been shown on film before, O'Hara is more than familiar with A Series of Unfortunate Events and, thanks to the Netflix series, gets the distinguished privilege of being the only person to appear in both screen adaptations.