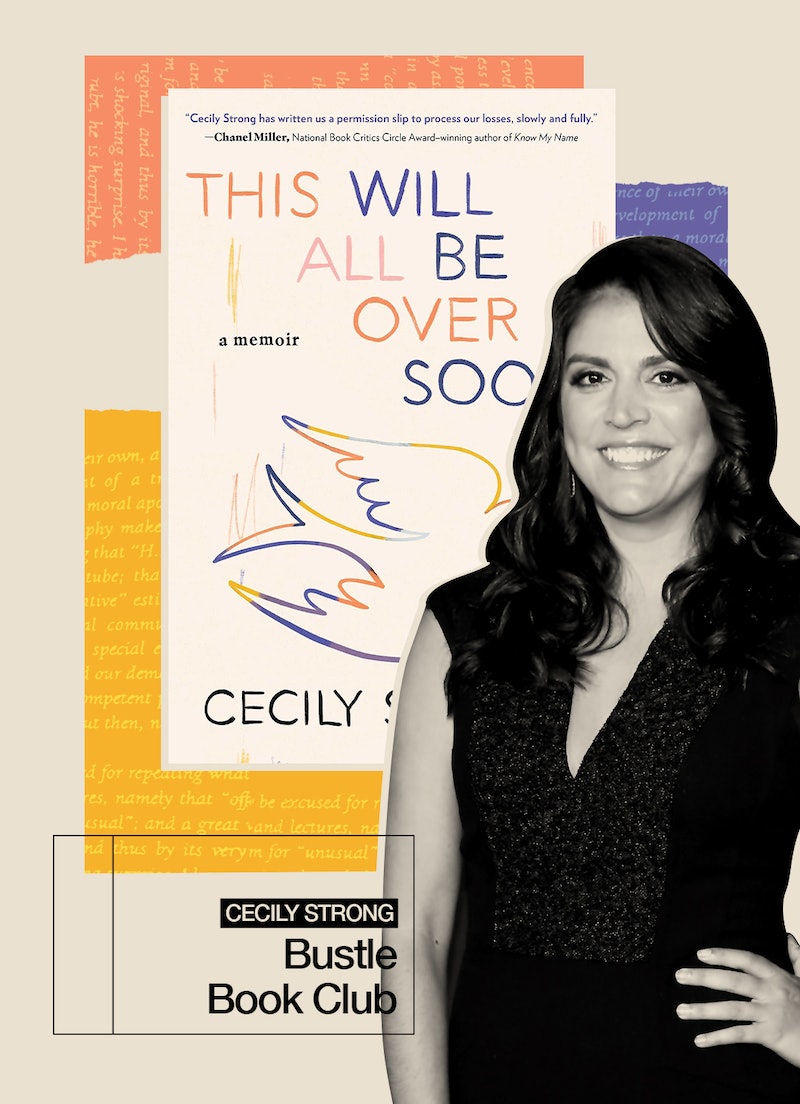 In March 2020, Cecily Strong spilled a bag of 100 tiny clamshells across her apartment floor. It was the beginning of the pandemic, her younger cousin had died months before, and yes, she’d ordered takeout linguine alle vongole the previous evening. Surrounded by mollusks, she wanted to chronicle the absurdity of the moment. “I sent [my first piece of writing] to a couple people, I don’t even know why. I think it was like, ‘This was very helpful to me,’” the Saturday Night Live star tells Bustle. “Looking back now, I was doing this therapy exercise.”

Strong continued the routine throughout lockdowns: committing feelings of loss, anguish, and, occasionally, joy to the page. The result is the diaristic memoir This Will All Be Over Soon, which at its core is an open-faced eulogy to her cousin, Owen, who died from the effects of glioblastoma at age 30. Through Strong’s rendering, we come to know Owen as a childhood redhead who loved birds, basketball, and love itself. And as much as This Will All Be Over Soon was an opportunity for Strong to introduce Owen to the world, it was also a way to hold him close.

“There’s a Regina Spektor song [“Aquarius”] where she says, ‘Dear someone listening in the shadows.’ [With writing,] it felt like I was talking to my dear someone, Owen,” says Strong, who’s flexing her own musical muscles this summer in the Apple TV+ series Schmigadoon. “It was like there was someone else there, an imagined person in the room with me who I could tell anything to and who wouldn’t judge [me].” Below, Strong reflects on her writing process — including her obsession with Irish detective novels.

On the linguistic perk of her favorite genre:

Normally, I read mysteries or any kind of detective novel from Ireland. I just read the new Alex Michaelides book, [The Maidens]. I actually listened to it. I love listening to Irish books, too. I find it very soothing. And now I finally know how to pronounce all of the Celtic and Gaelic names.

On her communal writing process:

When I had written something, usually my friend Kevin would read it out loud at our family dinners. That would maybe spark a discussion. The feedback wouldn’t be like “This isn’t very well written” or “I didn’t like that.” It was more like “What does this make us talk about?” That might inform what I’d write the next day. [We’d] cry for a minute and have our little catharsis over dinner, and then we’d have a dance party after.

On procrastinating with podcasts:

[My favorite pastimes] are podcasts, or an audiobook, and then puzzles on my iPad. What a nerd. I haven’t been caught by anything lately, but there were a couple of BBC [podcasts] that I liked: Down the Line and this one about James Le Mesurier [called Mayday]. I learned a lot about Syria.

On unwinding with Moira Rose:

In the beginning of January, when I got the first bad news about [Owen], I’d get a little high and turn on Schitt’s Creek. I’d kind of zone out, and laugh, and be a zombie. That’s how I watched most of Schitt’s Creek.