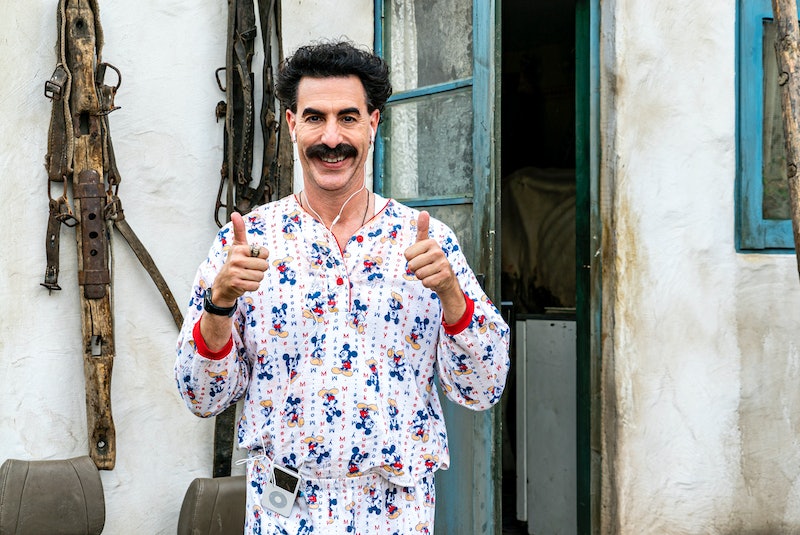 Over the years, Sacha Baron Cohen has famously duped political figures, including Dick Cheney, Sarah Palin, and Bernie Sanders. Even if you've yet to stream Borat 2 (aka Borat Subsequent Moviefilm: Delivery of Prodigious Bribe to American Regime for Make Benefit Once Glorious Nation of Kazakhstan) on Amazon Prime Video, chances are you still already know that Rudy Giuliani was among Cohen's most recent targets, thanks, in large part, to all the Borat 2 Twitter reactions from celebrities and various political figures. The sequel to 2006's Borat mockumentary features the former New York City mayor and lawyer to President Donald Trump caught in what could be (and, in many cases, was) perceived to be a questionable situation with actor Maria Bakalova as her character Tutar.

In Borat 2, Bakalova plays the 15-year-old daughter of Cohen's titular fake Kazakh journalist. While posing as a conservative reporter, she conducts a staged interview with Giuliani in a hotel suite, and afterward the pair decides to have a drink together in the bedroom. The camera shows Bakalova, who's 24 in real life, reaching into Giuliani’s shirt to retrieve his microphone. After she turns away from him, the politician lies down on the bed and can be seen reaching into his pants. This, of course, is the moment Cohen (as Borat) charges into the room, announcing that his "daughter" is 15 years old.

Giuliani claimed in a series of tweets on Oct. 21, however, that the scene was "a total fabrication" and that he was simply "tucking in [his] shirt after taking off the recording equipment." He added, "At no time before, during, or after the interview was I ever inappropriate. If Sacha Baron Cohen implies otherwise he is a stone-cold liar." He also referenced a July article from The Hollywood Reporter noting he called the police as soon as he realized he was part of a setup.

For his part, Cohen addressed Giuliani's tweet in an Oct. 23 Good Morning America interview. "If the president's lawyer found what he did there was appropriate behavior, then heaven knows what he's done with other female journalists in hotel rooms," he said.

Of course, plenty of other celebrities had more to add to the discussion. "Well, looks like the cat's out of the pants," Frozen's Josh Gad tweeted on Oct. 21 "Having seen #Borat2 I can now safely tell you #RudyGiuliani is over in a very big way. It’s worse than you think and more uncomfortable than anything I’ve seen in a recent film, documentary or otherwise." Judd Apatow and Meghan McCain were among those to comment on Gad's tweet, with the co-host of ABC's The View replying with "WHY IS EVERYTHING SO DISGUSTING?!?!!!" and, later, "I don’t want to watch anything that’s going to make me vomit..."

Bestselling author Rev. Michael Coren added that he hosted a daily TV show for 15 years without such an incident. "[I] never once took off my microphone by following a young woman into a bedroom while drinking cocktails, then putting my hand down my pants," he tweeted. "But then I'm not the professional that #RudyGiuliani quite clearly is."

To All the Boys I've Loved Before star Noah Centineo noted how the controversy had been great free advertising. "Borat's marketing for this sequel is out of this world," he wrote.

In fact, the comedy as a whole got raves from many Hollywood comedians, including Seth Rogen, Adam McKay, Kathy Griffin, and Amy Schumer. While Rogen wrote that Borat 2 had "a few of the funniest scenes [he's] ever seen in a movie," Schumer went so far as to say it's the funniest movie she's ever seen.

Other public figures such as politician Katie Hill and comedian Michelle Collins mentioned their parents, as well as the movie's, well, adult content. "I'm so glad I’m not watching #Borat with my dad," Hill tweeted. For her part, Collins shared a screenshot her mother's "perfect review" of a "period dance" scene.

James Gunn, Ike Barinholtz, and Seth Meyers were among the stars who ended up being surprised that Borat 2 had some "genuinely sweet" moments as well. While Gunn admitted he was "shockingly moved," Meyers called the emotional impact "the most unexpected delight."