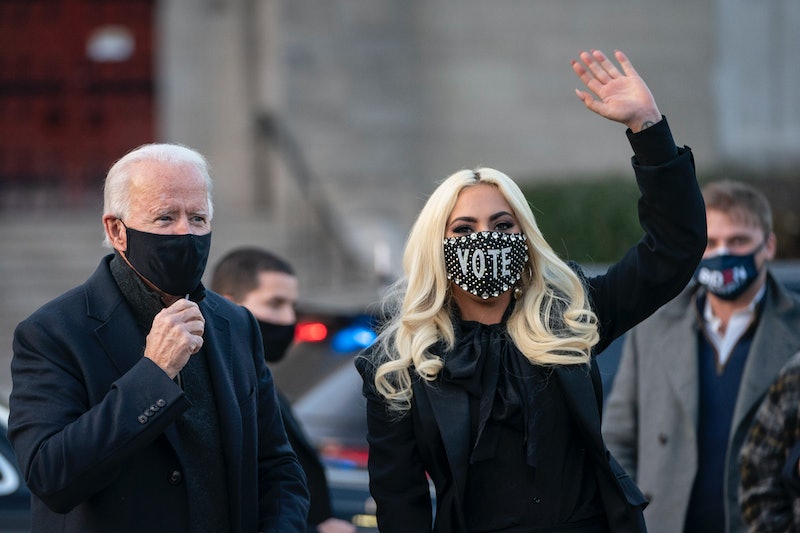 After months of baselessly claiming election fraud, inciting a riot at the Capitol building, getting banned from nearly every social media platform in existence, and becoming the first president in U.S. history to get impeached twice, Donald Trump has officially left the White House. "Have a good life — we'll see you soon," Trump remarked during a speech given at Joint Base Andrews in Maryland as he and Melania Trump notably skipped out on this morning's events. Today, Joe Biden and Kamala Harris were sworn in as the 46th president and vice president of the United States. "It's a new day in America," tweeted Biden, a sentiment shared by many Biden-Harris supporters throughout the country today, including a number of celebrities who've expressed their excitement on social media.

As the support for the new administration rolled in, the president and vice president continued to share positive and hopeful messages on social media ahead of the inauguration. "For the people—always," Harris wrote on Twitter. Biden also posted a heartwarming message directed towards his wife, Jill. "I love you, Jilly," he shared. "And I couldn't be more grateful to have you with me on the journey ahead."

When it came to celebrities' reactions, Mariah Carey tweeted a GIF from the music video for her song "GTFO," seemingly directed towards Trump as he exited Washington D.C.

Teenage climate activist Greta Thunberg tweeted a sarcastic farewell message to the 45th president, referencing a comment he once made following a speech she delivered at the UN Climate Summit in 2019. "He seems like a very happy old man looking forward to a bright and wonderful future," she wrote. "So nice to see!"

Lady Gaga, who sang the national anthem at Biden's inauguration, posted a message to Twitter detailing why the moment is so important to her. "Singing our National Anthem for the American People is my honor. I will sing during a ceremony, a transition, a moment of change—between POTUS 45 and 46," wrote the 11-time Grammy winner. "For me, this has great meaning."

The singer then posted a hopeful follow-up tweet continuing her message. "My intention is to acknowledge our past, be healing for our present, and passionate for a future where we work together lovingly," she added. "I will sing to the hearts of all people who live on this land. Respectfully and kindly, Lady Gaga."

Popstar Bebe Rexha wrote an inspiring message to her followers on Twitter regarding the fact that Biden will become the oldest president in history once inaugurated. "Just wanna let you know. It's never too late to chase your dreams," expressed the "Meant To Be" singer. "Joe Biden is 78 and is becoming the president of the United States today. Don't give up."

Actor Jesse Tyler-Ferguson posted photos of him and his spouse, producer Justin Mikita, posing alongside Biden and Harris to his Twitter page along with a joyful caption. "It’s been a long four years. Very Long. Finally, hope is on the way," he wrote. "So happy we made it to today."

Jamie Lee Curtis posted her support for the new administration on Twitter with a relatable joke about not fitting into her desired inauguration outfit due to life at home amid the pandemic.

"I decided to get dressed for the inauguration. First time in 9 months. Thought I'd wear blue jeans to honor [the Democratic party]," the actress wrote. "Thought they would fit. Nope. I'm going to rejoin the pair of jeans calorie accord as we join back up with the Paris climate accord."

Curtis followed up her initial tweet with a selfie of her sporting a pearl necklace in front of a sign that reads "YOU ARE HERE." She added: "Pearls for Kamala and all women!"

Katy Perry, who's set to perform at Biden's inauguration celebration tonight, took to Twitter to post a rather neutral message of togetherness. "#UNITY = you and I," wrote the "Smile" singer.

Rihanna, who called out Trump several times throughout his tenure, posted a photo of her carrying two giant black garbage bags and added, "I’m just here to help. #wediditJoe."

Actress Mindy Kaling shared a sweet photo of her daughter watching the inauguration coverage on television from their home. "It matters. Happy Inauguration day everyone," Kaling wrote on Twitter.

More like this
Man Meets Politics: ‘Boy Meets World’ Star Ben Savage Is Running For Congress
By Jake Viswanath
15 Photos Of 'The Last Of Us' Star Pedro Pascal That Cement His Zaddy Status
By Radhika Menon
Who Is Murray Bartlett Dating? 'The Last Of Us' Star Is Extremely Private
By Alyssa Lapid
Who Is Pete Davidson Dating? He & Chase Sui Wonders Got Caught Kissing
By Jake Viswanath
Get Even More From Bustle — Sign Up For The Newsletter
From hair trends to relationship advice, our daily newsletter has everything you need to sound like a person who’s on TikTok, even if you aren’t.