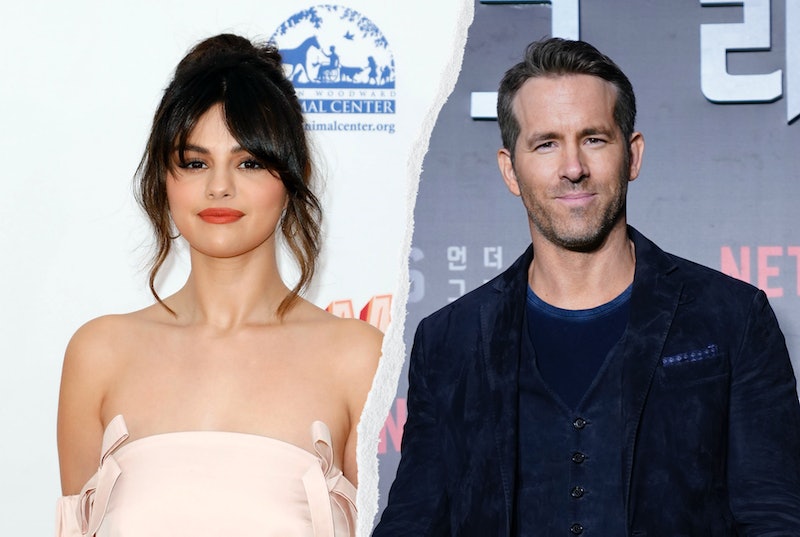 Voting in the U.S. presidential election for the first time is a major milestone for any American — and that includes celebrities. Like most first-time voters, some of our favorite stars were stoked to make their voices heard on Election Day. Selena Gomez, Billie Eilish, and Ryan Reynolds were among the many celebrities who headed to the polls for the first time, and most of them proudly documented the experience on Instagram.

While some first-time celeb voters were finally able to cast their ballots after recently turning 18, others became eligible after receiving American citizenship. Some stars also revealed that although they were eligible to do their civic duty in past elections, 2020 marked their first time at the voting booth. Celebs like Gomez and Snoop Dogg opened up about why they haven't participated previously and why this particular election felt so crucial. And with a winner still not declared between candidates Joe Biden and Donald Trump, it's more proof that every vote truly matters.

After announcing on Instagram that she voted early by mail, Gomez admitted that she never voted in a presidential election before. "It felt cool to be honest," she said during a recent appearance on the Voting Power Hour YouTube stream. "Honestly, I'm not ashamed to say this, but I kind of — this was my first time."

Like many first-timers, the singer explained that in the past, she felt that her vote held little value. This election, however, made her change her mind. "My vote counts," she continued. "Like, every little thing counts, so I just think some people get in their head, and they're like, 'Oh well, what does it matter?' And then once I really, really started going in and diving into this, it's been all I can focus on."

Eilish was eligible to vote for the first time after turning 18 in December 2019. Leading up to the election, she made her voice count by performing at the Democratic National Convention and launching her own voting initiative in October. In a video posted to Instagram, the Grammy-winning singer explained that fans can text "BILLIE" to 50409 to register to vote or check the status of their registration.

"It's basically a pledge," she said. "Just because I think that I'm gonna need a promise from a lot of you guys, especially a lot of you new 18-year-olds like me. This is gonna be my first time voting. I used to not care about this kinda thing, and I think it's really, really important that you care... Register to vote. Please vote. It really, really matters."

Reynolds, a Canada native, obtained dual citizenship in the U.S. and his home country in 2018. Luckily, he had wife Blake Lively to guide him through his first time voting in a U.S. election. "I'd like to thank my wife Blake for making my first time so gentle and loving," he wrote on Instagram. "It was super scary at first, then exciting and now I'm a little tired. But proud."

Lively also cracked a joke about Reynolds' voting experience on social media. "He was understandably scared," she said. "It all happened so fast. Like, REALLY fast. He wept. I pretended to weep. Then he called all his friends."

In what may shock Peter Kavinsky lovers across the nation, Noah Centineo has never voted before. Fortunately, that changed this year. The To All the Boys I've Loved Before star confirmed that he voted in the 2020 with a selfie featuring two "I voted" stickers and a "F*ck this I'm voting" hoodie. "First timer over here," he wrote.

The former Real Housewife and famous mom to models Gigi, Bella, and Anwar Hadid was able to vote for the first time after becoming an American citizen. To mark the historic moment, Bella accompanied her to the polls. "Took my mama to vote for the first time today!!!" she wrote on Instagram, sharing photos of them at their local polling place. "She became an American citizen just recently ... and this year she was so determined to get out and vote. I am so proud of her!!! Wearing our best Blues!!!!!"

British talk show host Oliver was officially able to vote after obtaining his American citizenship in December 2019. As he told Stephen Colbert on Nov. 2, he almost cried after casting his ballot, as it felt like his citizenship was finally recognized.

"As an immigrant who had just got his citizenship in December of last year, I was waiting for that to feel real," he said, adding that he would always worry about his immigration status. "Giving them my name and getting the ballot, I didn't feel it. Scanning it into the machine and the machine saying, 'Your vote has been counted,' I nearly burst into tears. That is the truth."

Gerber turned 18 in September 2019, meaning she could finally vote for president in the 2020 election. The model took to Instagram to show off her "I Voted" sticker and opened up about the experience. "I'm so proud to be part of the election, because it's become so clear how much power young people have to push this country towards progress — as long as we participate," she wrote.

She then used her post to encourage her followers to do their research before voting. "If you're not sure if you want to vote, i ask you to consider who and what will be most affected if you don't," she continued. "Please vote even if it sounds like a headache. do it with empathy, do it with love, and do it with reason because it matters."

In what may have been a shocking announcement to some, Snoop Dogg said this would be his first time voting during a June interview on Real 92.3 radio show Big Boy's Neighborhood. However, the 48-year-old rapper didn't purposefully abstain from voting. Rather, he was under the impression that his criminal record prevented him from doing so. "For many years they had me brainwashed thinking that you couldn't vote because you had a criminal record," he said. "I didn't know that. My record's been expunged so now I can vote."

The Chilling Adventures of Sabrina star turned 18 in November 2017, so this presidential election cycle was her first chance to make her voice heard outside of the midterms. Like so many other first-timers, she was thrilled to be able to participate in her government after watching from the sidelines for so long. "Voting is COOL," she wrote on Instagram alongside a selfie with her ballot envelope.

Back in June, France revealed that he officially became a U.S. citizen, which was something he had been working toward for 20 years. Of course, registering to vote was the first thing the Queer Eye star did after reaching his "monumental" goal. "Now, I will exercise my constitutional right as an American," he wrote on Instagram. "Today, I will register to vote, and vote for the change I wish to see in OUR nation."

Despite having launched a 2020 presidential campaign as an independent candidate in July, West revealed on Election Day that he would be voting for the first time this year. Unsurprisingly, the rapper voted for himself, writing his name on the ballot in Wyoming. West has since conceded the election, in which he garnered around 50,000 votes, according to Billboard. However, he is already looking ahead to 2024. "WELP KANYE 2024," he tweeted.

More like this
Selena Gomez Confirms She's Single Amid Drew Taggart Dating Rumors
By Martha Sorren, Jake Viswanath and Jack Irvin
4 Surprising Celeb Throuples That Got The Internet Talking
By Sophie McEvoy
Man Meets Politics: ‘Boy Meets World’ Star Ben Savage Is Running For Congress
By Jake Viswanath
Everything You Need To Know About Kanye's Post-Kardashian Dating Life
By Bustle Editors
Get Even More From Bustle — Sign Up For The Newsletter
From hair trends to relationship advice, our daily newsletter has everything you need to sound like a person who’s on TikTok, even if you aren’t.