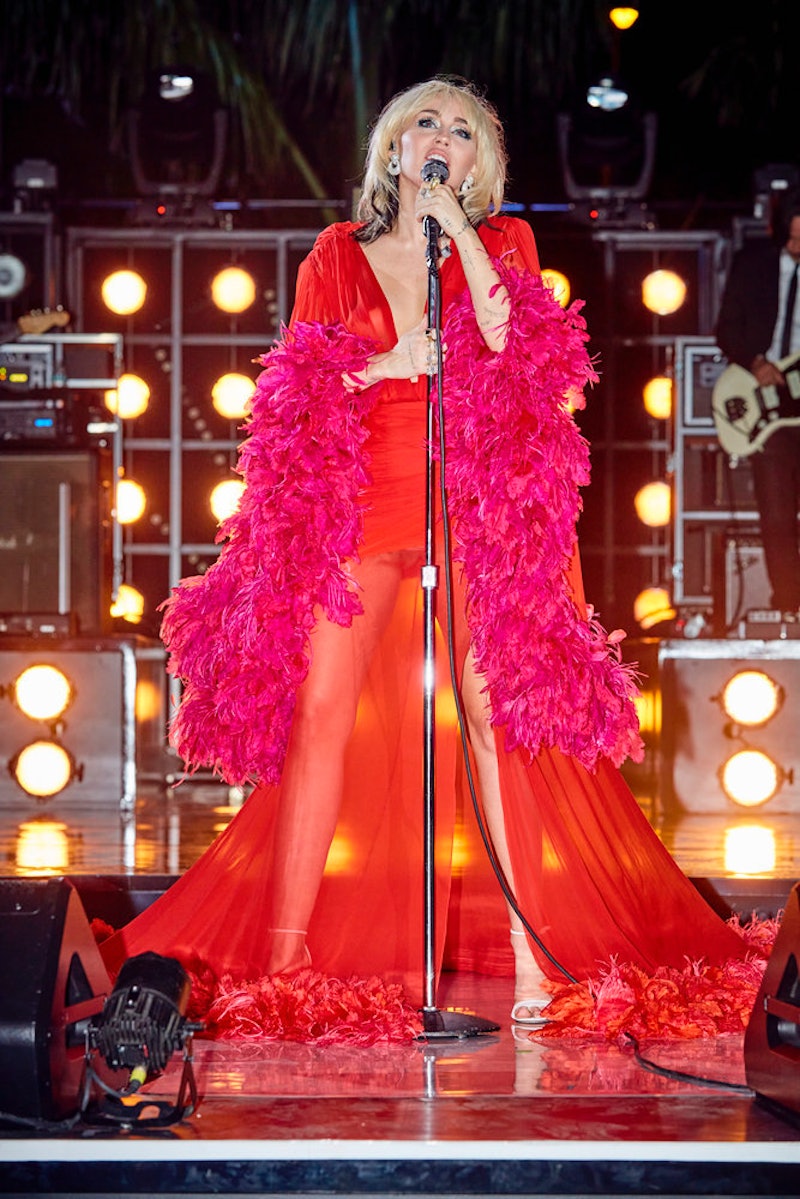 Everyone is feeling 22 now that we’ve officially left 2021 behind and entered the new year. On Instagram, celebrities were no different. Starting on Dec. 31 and continuing on Jan. 1, stars used their IG accounts to share their goodbyes to one year and begin anew in 2022. That made for memorable (and maybe even memeable) posts, whether it was Rihanna showing off some Savage x Fenty wear, Chris Hemsworth taking a snow bath, or Shakira and her footballer partner, Gerard Piqué, whistling through the transition.

To mark the big event, there were televised celebrations all around the country. That meant some stars had to work on the holiday, including Miley Cyrus, who got to host her own NBC special with Pete Davidson. Over the course of the night, her feed quickly filled up with photos from Miley’s New Year’s Eve Party, which was filmed in Miami. She showed off fun moments with her co-host, performance clips, her many outfits, and more. Meanwhile, Lizzo had a show of her own on New Year’s Eve. The three-time Grammy winner shared footage of the countdown to midnight from Las Vegas and wrote, “What a way to bring in the new year. Thank you, next. Moving forward.”

Cyrus was one of the many stars who opted to celebrate their sultry side as they welcomed in 2022. That list also included Rihanna, Zac Efron, Dua Lipa, Kate Hudson, and Kourtney Kardashian.

Unlike those who shared beach photos, Chris Hemsworth showed himself enjoying the snow and endorsed a replacement for ice baths. “It’s all about snow baths in 22,” he wrote in part, alongside of a photo of his proof.

Also keeping it a little silly were Shakira and her footballer partner, Gerard Piqué, who whistled their way into 22.

Taking another approach were the stars who kept it glamorous. Prince William and Kate, the Duke and Duchess of Cambridge, threw it back to September with a photo of them from the London premiere of the latest James Bond film, while Sofia Vergara and Joe Mangianello were dressed up with loved ones. Nicki Minaj was also serving looks in the carousel of photos she posted.

On the other end of the spectrum was Mindy Kaling, who shouted out her fellow “party animals” from the comfort of the couch.

Nick Jonas kept his post romantic. He shared a photo with wife Priyanka Chopra and captioned it, “My forever New Years kiss.”

Work came into play for Camila Cabello. She posted a sunset selfie with a caption that highlighted her excitement about releasing her third album, Familia, in 2022.

While 2021 had some very hard moments (including the loss of Betty White at the 11th hour), there were also a lot of milestones and wins to celebrate. Some stars chose to do just that, like Lily Collins who shared more photos from her September wedding to Charlie McDowell. Meanwhile, The Morning Show co-stars Jennifer Aniston and Reese Witherspoon both opted to upload montages showing a variety of special moments, both big and small.

And, of course, the holiday just wouldn’t have been complete without some New Year’s glasses. Luckily, Dan Levy delivered with his post.

More like this
Beyoncé Just Announced Tour Dates: Here's How To Cuff Tickets To Her 2023 Shows
By Jake Viswanath
Twitter Is Having A Meltdown Over Buying Beyoncé Renaissance Tour Tickets
By Jake Viswanath
'Knock At The Cabin' May Start Streaming Sooner Than You’d Think
By Jake Viswanath
Reese Witherspoon Confirms This Fan Favorite Will Return For 'Legally Blonde 3'
By Jake Viswanath
Get Even More From Bustle — Sign Up For The Newsletter
From hair trends to relationship advice, our daily newsletter has everything you need to sound like a person who’s on TikTok, even if you aren’t.