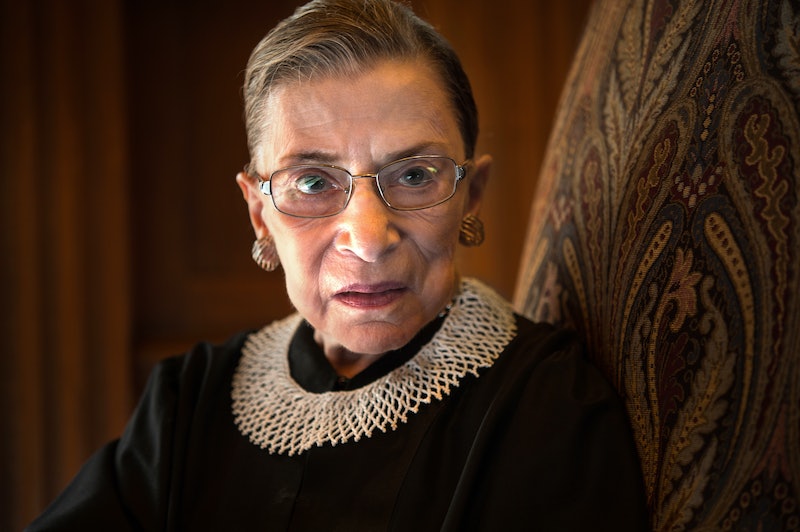 In the hours following Supreme Court justice Ruth Bader Ginsburg's death, celebrity tributes came pouring in. Barack Obama, Felicity Jones, and Kerry Washington — among many others — all paid homage to the pioneering legal icon, who'd served on the Supreme Court since 1993, when former president Bill Clinton appointed her to the position. While public figures mourned Ginsburg's loss, noting that she'd more than earned her rest, many also vowed to carry on the legacy she established throughout her storied career.

As several stars explained, Ginsburg left a crucial seat open on the Supreme Court. Immediately after her death, Senate Majority Leader Mitch McConnell vowed in a statement that Donald Trump's replacement will receive a vote on the senate floor, despite blocking Obama's February 2016 nomination of Merrick Garland because it was an election year. Replacing one of the court's remaining liberal justices with a conservative could shift the balance of the nation's highest court for a generation, and celebs urged everyone to take action.

The 44th POTUS penned a lengthy statement lauding Ginsburg's "unwavering faith in our democracy and its ideals," also noting that "she left instructions for how she wanted her legacy to be honored."

After praising Ginsburg as "an American hero, a giant of legal doctrine, and a relentless voice in the pursuit of that highest American ideal: Equal Justice Under Law," the former Vice President and 2020 presidential nominee added in a separate tweet: "Let me be clear: The voters should pick a President, and that President should select a successor to Justice Ginsburg."

In a series of tweets, the U.S. Senator from Massachusetts referenced a statement from Ginsburg's granddaughter, Clara Spera: "Ruthie's 'most fervent wish' was for her replacement not to be named until a new president is installed. We must honor her wish."

The former President called his 1993 nominee "one of the most extraordinary Justices ever to serve on the Supreme Court," adding that "her powerful dissents reminded us that we walk away from our Constitution's promise at our peril." Meanwhile, Secretary Clinton referred to Ginsburg's memory as a "call to continue her work for justice and equality under the law."

Sanders noted the "tremendous loss to our country," writing that Ginsburg "will be remembered as one of the great justices in modern American history."

"It is heartbreaking that in her final moments she was, as are many others, preoccupied with what would happen after her passing," the New York congresswoman tweeted. "I want to make one thing clear: we can, and must, fight."

"Ruth Bader Ginsburg gave us hope, a public figure who stood for integrity and justice — a responsibility she did not wear lightly," the actor, who played Ginsburg in 2018's On the Basis of Sex, said in a statement to People. "She will be missed not only as a beacon of light in these difficult times but for her razor-sharp wit and extraordinary humanity. She taught us all so much. I will miss her deeply."

The Scandal alum wrote that it's "our turn to fight."

"I hope you rest well, RBG, you must have been tired from changing the world," Kaling wrote in part.

Encouraging his followers to make donations in key Senate races nationwide, the EGOT winner said it's now time to "get to work."

Similarly, Witherspoon tweeted that it "is now our turn to carry her fight," while also acknowledging the "painfully tragic loss for our nation."

Calling Ginsburg "a Lioness Of Light and Righteousness," the Avengers: Endgame star promised to "fight like RBG did for us every single day."

Evans noted that Ginsburg was one of a kind, also sharing links for fans to donate to flip the Senate. "Let's fight for her like she fought for us," he tweeted.

The Captain Marvel lead shared a Ginsburg quote, adding that women will "keep pushing our way into all the places we've yet to be invited."

Pointing to Ginsburg's championing of "equal rights, women’s rights, LGTBQ+ rights, affordable healthcare AND MORE," the singer encouraged her followers to vote in November to "continue her legacy and strive for greatness."

The Academy Award nominee shared a story about her 2-year-old daughter Giulietta.

Carey thanked Ginsburg for "a lifetime of service" and for "changing history," vowing to never let her work be undone.

The Deadpool actor kept his tribute short and sweet.

"If there is a God," the Veep star wrote, "may She bless and keep RBG."

He also shared a quote from Ginsburg about fighting "for the things you care about."

The singer wrote that Ginsburg was "the only thing between us & the death of justice."

With a heavy heart, the singer and Antebellum star said the "baton has been passed to us," and that she will "keep fighting."

The "heartbroken" This Is Us star thanked the "trailblazer" for her "love and legacy to the rule of law," adding, "We will honor you by voting to protect all that you stood for."

Bush wrote she was "truly and utterly gutted," grateful, and in awe of the "icon" and "hero."

The tributes to Ginsburg that continue to flood social media are only a small piece of the evidence that RBG's legacy will live on.