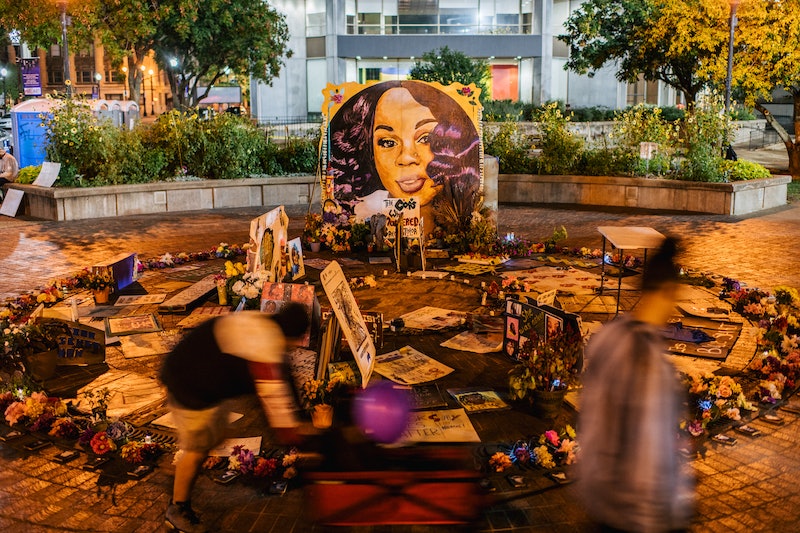 The U.S. is in mourning once again after none of the police officers involved in Breonna Taylor's killing were charged for her death. Celebrities are continuing to demand justice for Breonna Taylor after a grand jury in Louisville, Kentucky, indicted Detective Brett Hankison with three charges of "first-degree wanton endangerment." Taylor is notably not listed as a victim in Hankinson's indictments.

In March 2020, Taylor was shot multiple times by officers who entered her home with a no-knock warrant as part of a narcotics investigation, despite the fact that their suspect did not live there. No charges were filed against Sgt. Jonathan Mattingly and Officer Myles Cosgrove, who were also present at Taylor's apartment during the raid. None of them were charged with murder; in fact, even Hankison's charges don't have anything to do with Taylor at all. According to The Huffington Post, the charges were tied to damage caused in neighboring apartments, not Taylor's. And as reported by the Associated Press, Kentucky attorney general Daniel Cameron said at a press conference the use of force by Mattingly and Cosgrove "was justified to protect themselves" (seemingly referring to the fact that Taylor's boyfriend opened fire on police thinking they were home invaders), preventing him from pursuing further criminal charges.

Mattingly and Cosgrove were placed on administrative reassignment following the shooting, per The AP. Hankison, meanwhile, was terminated by the Louisville Metro Police Department in June for reportedly showing "extreme indifference to the value of human life." And on Sept. 15, the city of Louisville settled a wrongful death lawsuit with Taylor's family for $12 million.

Following Wednesday's announcement, Ben Crump, attorney to Taylor's family, wrote on Twitter that the decision was "outrageous and offensive" to Taylor. "If Brett Hankison's behavior was wanton endangerment to people in neighboring apartments, then it should have been wanton endangerment in Breonna Taylor's apartment too," he said. "In fact, it should have been ruled wanton murder!"

Many celebrities speaking out are in agreement, with everyone from Yara Shahidi to Congresswoman Rashida Tlaib calling out the charges as insufficient, specifically as they seem to ignore the harm done to Taylor and her family.

Other celebrities put out a call to action for the 2020 election, encouraging those upset by the charges to act at the ballot box this November. Kerry Washington specifically called on her followers to vote even if they struggled to find hope that any change within the current political system is possible. "I understand the desire to not vote," she wrote, "To reject a system that abuses you & denies your worth. But please know that the system - DOES see your worth. It's AFRAID of your power. That's why it works so hard to make you feel powerless. You are NOT powerless. Vote!"

Other celebrities called for more immediate action. Dan Levy tweeted his outrage and urged followers to donate to the Louisville Community Bail Fund in anticipation of protests and possible arrests in the hours to come. "Justice should not be a luxury," he wrote.

Director Ava DuVernay spoke out against the charges by paying tribute to Taylor's family. "Her tragic death compounded by the violence of silence and inaction by the city she called home is more than any of them should have to endure," she wrote, joining a chorus of fellow celebrities sending well wishes to Taylor's loved ones.

Rapper and actor Common responded by posting a speech from playwright and civil rights activist James Baldwin, reminding everyone that the fight for Black lives must continue. Meanwhile, former presidential candidate Bernie Sanders and others tweeted demands for a change in the justice system. Even Donald Trump's niece, Mary Trump, seemingly tweeted her support of protestors demanding justice.