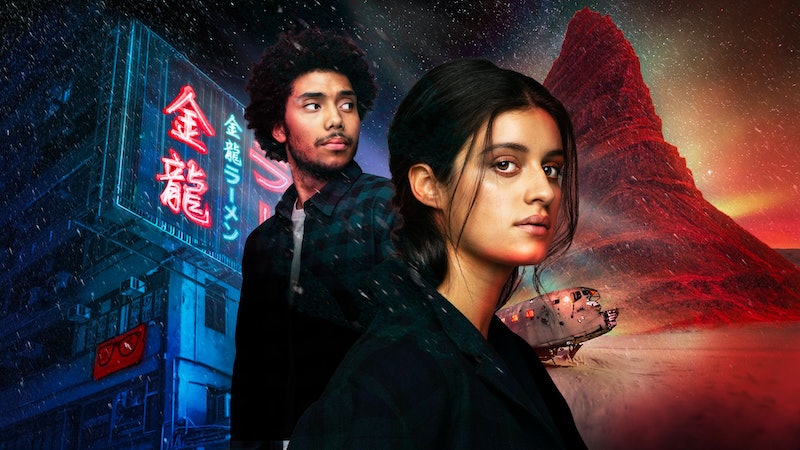 Chance Perdomo, otherwise known as Ambrose Spellman in Netflix's Chilling Adventures of Sabrina, loves a good podcast. As does his latest co-star Anya Chalotra, ofThe Witcher fame. The pair have recently ventured into the competitive podcast arena themselves, starring in BBC Sounds' epic sci-fi audio series, The Cipher. The podcast follows the story of 16-year-old Sabrina (Chalotra), who manages to crack a cryptic online puzzle that stumps even the most intelligent of minds. Soon after, Sabrina finds herself in the midst of an international hunt for a serial killer, and is joined in her journey by a New York teen named Benny (Perdomo) — the only other person to have solved the Parallax puzzle.

Speaking to the duo over video call, we discover their personal podcast tastes differ slightly. Chalotra says Under the Skin with Russell Brand, and The High Low are the two that have offered her most escapism from the chaos of 2020. While Perdomo's favourites include The Joe Rogan Experience, and Alexandra Cooper's Call Her Daddy.

Here, Bustle catches up with Perdomo and Charlotra to find out more about The Cipher, what it's been like working in the midst of a global pandemic, and their thoughts on the importance and value of the arts.

How would you describe The Cipher?

Anya Chalotra: The podcast is a hope-punk drama, which means that within the bleakest of circumstances good always comes through and can triumph. That's the genre of The Cipher. And it's a thriller and a mystery.

What other shows would you compare The Cipher to?

Chance Perdomo: It's a little bit of Doctor Who, a little bit of Stranger Things, and I would roll some of Marvel's Avengers in there, too. I would then squish that into this lovely bombastic audio experience that we're serving to the audience.

How did the pandemic impact production?

CP: We were originally going to record it as we would a film or a TV show, just with microphones instead of cameras, so we did have to adjust. It was fairly early on during lockdown, so we were all in the same studio space, but in separate rooms. We had a monitor quite like this, like Zoom, and we were able to still act it out, just face-to-face rather than going through all the actions. We were still moving around though, jumping and climbing over pretend objects.

Had you worked together before this?

CP: No, I saw a few episodes of The Witcher, but other than that, I wasn't really familiar with the lovely Anya. She's charming, she's a pleasure to work with, and she's a great scene partner.

AC: I hadn't worked with Chance either. Obviously, I knew that he was in Sabrina, and couldn't wait to work with him. As Chance said, it was an absolute pleasure to have that time together in the pandemic as well. It was my first job back from lockdown, and I have to say that it's one of the highlights of this year for me because it was such a wonderful cast.

How did you find the transition from on-screen to audio?

CP: I think ultimately it comes down to the people you work with, provided you get along, and you vibe with the people that you're seeing every day, the medium doesn't really matter. You find those lovely points of flow, and the sweet spots, like magic pockets, so you don't really approach it too differently. Maybe you focus on the voice a bit more. But once you're in it, and you're vibing, it just flows like anything, like easily spreadable butter.

AC: Yeah absolutely, I'd agree. It's the people in the room. But also, TV to audio, I actually find that my work alongside recording is always better. Because you have to be really specific and detailed in your voice, and you really have to think the thought because you can hear it in your voice. I've really learnt a lot from recording, and I definitely take all the skills I've learnt from recording into TV, to theatre, to everything.

How would you describe the characters of Sabrina and Benny?

AC: Sabrina, at the heart of it, is a really relatable character. While she's incredibly intelligent, and obsessed with puzzles, she's also so witty, and good-humoured, and doesn't take herself too seriously. She's really honest and loveable, I think.

CP: Benny is a quirky, upbeat, happy, energetic, confidante to Sabrina. As far as the journey that they go on together, they end up discovering a lot more about themselves through their friendship.

AC: Yeah, absolutely. It's an unexpected but strong relationship.

What do you think the listener will get fromThe Cipher?

CP: This podcast drama, this audio experience is mad, and quite bombastic. Even amidst everything going on, you'll find a lot of escapism, and an awesome adventure.

AC: It really does have a bit of everything, and I think it will tug at a lot of peoples heartstrings, and also let everyone's imaginations go a bit wild and free. They can definitely escape in the world of The Cipher.

What are your thoughts on the impact of the pandemic on creative industries?

CP: First and foremost, the social nature of human beings demands escapism, and a degree of storytelling. In these times, our mediums and the way we choose to escape is definitely changing. I think it has highlighted the social importance of telling stories, of learning vicariously through fiction and non-fiction. The creative industries enhance and highlight beautiful aspects of what it is to be alive and be human. And I think that it's imperative that the arts continue to be funded.

AC: Yeah, I completely agree. It's important not to undermine or dismiss a creative soul, and how powerful that is, because then you're ruling out so much of the population. I think we need the creative arts to survive. We just need to honour that, and make sure there's funding there for those people who need it.

Chance, the forthcoming season of Netflix's Chilling Adventures of Sabrina will be the last. What will you miss most about it?

What can fans expect from the final season of Chilling Adventures of Sabrina?

CP: I think fans are gonna love it. Fans of the original iterations of Sabrina, fans of the darker stuff, like the True Blood side, and even your Riverdale fans. It's got bits and bobs for everyone, and it does pay fan service and fan respect in ways that we wouldn't have been able to do if it wasn't the last season.

What do you think about the fans' reaction to Sabrina's cancellation?

CP: I mean, the fans have been very supportive since the get-go. It's been a blessing to have the show be as beloved as it was. It can be quite daunting, and fan reception can be mixed with with a reboot. It can be quite hit or miss, so it's been an absolute blessing that they've taken to it as they have. I really do think they're gonna love this one a lot, especially the penultimate episode. That one's gonna have people like, 'oh my goodness.' There's a bit of a crossover, not the one you're thinking, but there is a bit of a crossover that fans would not have expected. And that's all I can say, at the threat of gunpoint.

The Cipher is available on BBC Sounds this Christmas.