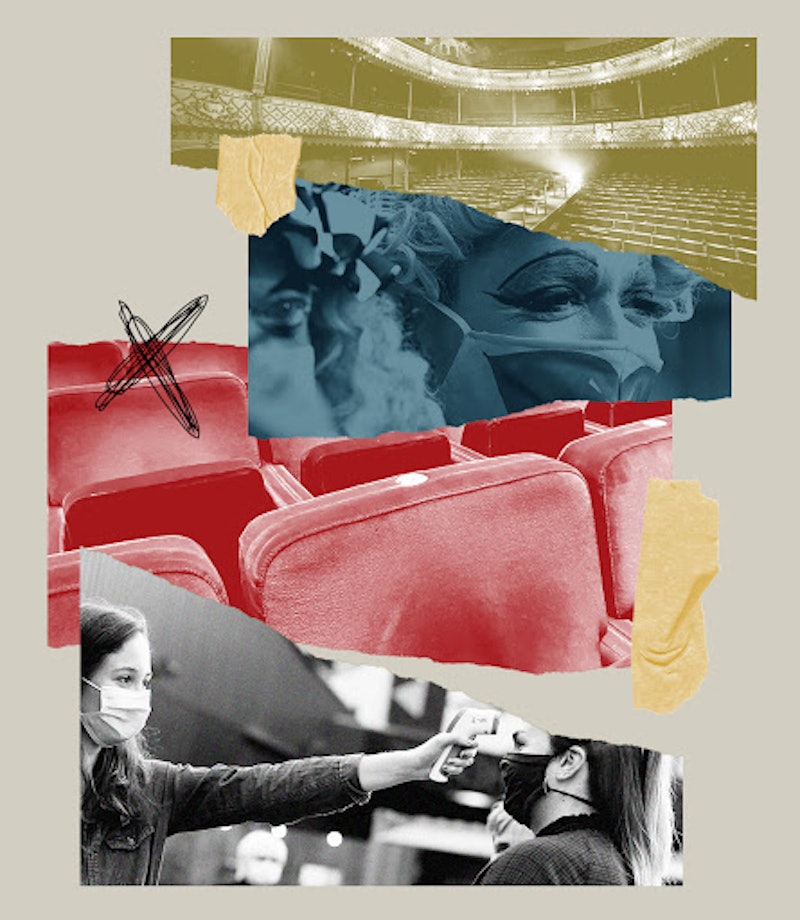 Revival is a familiar concept in theatre. If a show proves successful, it's more than likely to come back around at least once or twice – maybe more. Each time though, the context changes, as each new audience take their seats with fresh perspective. As the theatre industry takes steps towards reopening after being closed for the majority of 2020, I'm reminded of this concept. The revival of theatre will not only require a return to its key tenants – creativity, community, spectacle – but also major change to the way in which it operates.

I have been working in the arts since 2014 and theatre specifically for five years, both as an independent freelancer on new shows – writing contracts, fundraising and marketing, sitting in castings and reading scripts – and as a project manager and administrator for more established companies. With the new year on the horizon and a renewed hope for normality in the form of a coronavirus vaccine, it's time to think about what theatre will look like in 2021.

The Impact Of Coronavirus On UK Theatre

Like many public-facing industries, theatre has been hard hit by the pandemic. While pubs, cafés and restaurants were given a boost by August’s Eat Out to Help Out scheme, and "non-essential" workers returned to their jobs, the same cannot be said for the majority of those in the performing arts.

Jon Morgan, director of the Theatres Trust, noted that while only 11% of employees across all industries were still making use of the government’s furlough scheme in September, 51% of those were theatre employees, who remained "reliant" on it right up until it was due to end on October 31. It was simply not viable for the majority of theatres to reopen, as most didn't have the means to put in place socially distanced measures and break even.

Compounding this problem, most theatre workers are not employees. Of those working in theatre, 70% are self-employed, often combining freelance opportunities with part-time work on payroll – a nuance of the flexible economy that was overlooked by the self-employment support schemes. If your PAYE job had averaged over half your income over the past three years, including through casual contracts with no entitlement to redundancy packages, you were locked out of government support.

Morgan and other arts leaders and supporters have made a clear case for the industry, highlighting it as a serious economic force in the UK that brings in billions of pounds, in order to leverage targeted, sector-specific support. For example, Morgan identifies that for every pound spent at a local town or city’s theatre, £11 is spent in nearby bars and restaurants; and the figures are significantly higher for West End theatres.

De-Centring London In The Theatre Landscape

With no work coming in, many theatre makers who had built their lives in London found themselves questioning this choice during lockdown. Why be based in a city with a notoriously expensive rental market? (Especially those who work on touring productions.) One thing this year has proven is that even those initial coffee meetings don’t have to take place in the lobbies of central London arts venues.

For Kat Joyce, co-artistic director of physical theatre ensemble Tangled Feet, 2020 proved to be a perfect time for her family to relocate from London to Cornwall, where her parents are based.

"We had been bouncing around a move for a few years, and COVID-19 pushed us over the edge – partly a 'what are you going to do with your one wild and precious life' moment, plus the knowledge that London as we knew it was gone for the foreseeable," she tells me. "Theatre having a quiet year has given us the chance to make the leap and readjust. Who knows what the future holds, but life in the present here is infinitely better."

While large cities such as Manchester, Glasgow, and Leeds are likely to become popular relocation hotspots, with thriving theatre scenes already in existence, some may use the opportunity to move to coastal towns, like Folkestone and Hastings, both burgeoning arts hubs. Producer Ashleigh Bowmott, and her partner who also works in theatre, have been living on a houseboat in London for the past two years. However, with a young family to think about, lockdown led them to sell their boat to move to the south coast.

"Ultimately I can't imagine trying to hold on to [a job in] the theatre sector [while also cultivating] a sustainable housing situation in a major city – the structures just insist that those things aren't compatible."

"We realised we really don't need to be in London – it just doesn't love us, we don't have work commitments requiring us to be here and we can't afford it," she explains.

For Bowmott, it was a choice between a change of location or a change of career, and she wasn't willing to consider the latter. "Ultimately I can't imagine trying to hold on to [a job in] the theatre sector [while also cultivating] a sustainable housing situation in a major city – the structures just insist that those things aren't compatible."

However, the magnetic pull of live performance in city centres is unlikely to disappear anytime soon, says Morgan. "City centres might primarily become play-spaces rather than workspaces," he suggests.

One of the priorities moving forward must be retention of people in theatre, and all that their years of experience, foresight and passion brings to the table. While the sector will recover, many people will not be returning to theatre in the spring. The lack of certainty, particularly for those less established in their chosen field, will have made staying in theatre unaffordable.

Friends and peers have told me that they've taken this time to reflect, viewing theatre as less of a lifestyle, and more as a career with relatively low pay and reduced access to benefits such as parental leave. These are the people that the industry will need to work harder to support in order to retain talent.

"We don't have a collection in a way that a museum or gallery does; our collection is the sum total of our talents," Morgan notes. It’s a collection that needs a diverse workforce, including marginalised groups, to authentically tell their stories.

Positive steps have been made by multi-arts centre HOME in Manchester, whose recent call out for its festival of new theatre, PUSH, consisted of a two-step process for applicants.Those invited to submit a fuller description of their work were given £50 as a token of acknowledgement of the time and effort that goes into writing these kind of applications.

When the company I founded, Broccoli, applied for an emergency grant from Arts Council England, we factored in funds for external panellists, who might not ordinarily have a say in the commissioning process, to help us choose projects to support. The result was a richer layer of conversations and more perspectives than our team of two would be able to provide. If bigger players were able to take this approach, it would offer greater transparency for those losing confidence in their theatre industry, and result in a greater diversity of work.

In light of this, the Black Womxn in Theatre and Eclipse Theatre, with the support of London's Bush Theatre, set up the #AllofUs Redundancy Care Campaign, "an immediate response to support Black, Asian, ethnically diverse and migrant arts workers facing redundancy." The most significant part of their campaign is #HereToStay, a four-week programme of professional development including workshops, coaching, and digital meet ups to support those in the arts who have recently faced job instability.

Elsewhere, the Seven Inclusive Principles for Arts & Cultural Organisations campaign has been set up to ensure D/deaf, disabled and neurodiverse people are not excluded, either as audience members or workers, as theatre reopening gets under way.

The Shows That Will Go On

While the furlough scheme has now been extended until the end of March, recent changes in restrictions have allowed some theatre staff to get back to work – rehearsals can now happen face to face, and in tiers 1 and 2, theatres are starting to reopen with a run of Christmas shows.

What can we expect to fill our stages in 2021? Beyond pantomimes, theatres such as The Bridge and the National Theatre in London have understandably focussed on solo shows as a vehicle for socially distanced staging, but the prospect of entire seasons with just one person addressing the audience is unlikely. After such a long time away from seeing shows, people will be craving the presence of ensembles, epic stage designs, and exciting costumes – these are the shows likely to yield strong returns at the box office.

In the coming months, the industry will also have to strike a tricky balance between creating opportunities for never-before-seen work, while harnessing the commercial reliability of established names and shows, during a time when many will be more cautious about spending their reduced disposable income on theatre.

As we've seen during lockdown, many of our finest working playwrights are also making shows for the small screen – Quiz, I May Destroy You, Normal People and I Hate Suzie were all written or co-written by theatre creators. This means theatre has to further up its game to be worth leaving the TV for. Beyond great dialogue, programmers should think about how live performance can surprise audiences, and offer them a 360 experience they can't find anywhere else.

Performance festivals across the country – Experimentica in Cardiff, Buzzcut and Take Me Somewhere in Glasgow, Mayfest in Bristol, and (of course) The Fringe in Edinburgh – have long led the way for this type of work, which I’m confident mainstream audiences would latch onto if given the opportunity. In fact, as the first returners to venues will likely be a younger or experience-seeking crowd, bold, flirty, and irreverent shows will likely see better results than presenting minimally-designed classics alone.

When we do return to theatres, we should expect them to look unfamiliar. Let's take The Pleasance Theatre as an example. Alongside its annual presence in Edinburgh for the Fringe, Pleasance runs a year-round venue in London, which includes a small studio and main space. While the small studio is likely to be used as a rehearsal space for the foreseeable future, director Anthony Alderson's plans for the main space give the biggest insight as to how this time has changed priorities.

"We're going to go through a massive transformation and turn it into the most flexible sort of cabaret space we possibly can," he says. "A space that could be adapted to present plays with small casts."

Alderson also notes that this new layout will have to provide space for cameras to film high-quality footage fit to stream. Bar some of the larger productions and companies, most theatres didn’t have the capacity for this during lockdown, therefore missing out on opportunities. Alderson anticipates that theatre makers will now make moves to become better equipped for digital, alongside live viewing, in the future.

After months of distance and isolation, stepping back into an auditorium will revive an opportunity to connect with friends and strangers

The power of congregation will remain, whatever the seating configuration. Alderson speaks fondly about a recent trip to Zippos Circus – "It was glorious … children laughing, smiling together … it was a joy" – and I am reminded of a friend of mine who doesn’t work in the arts, who posted to her Instagram about being able to clap for the first time in six months after going to a gig and a play.

We want to go back, in order to be together. After months of distance and isolation, stepping back into an auditorium will revive an opportunity to connect with friends and strangers in a way a lot of us are missing at the moment. Albeit from a different – more flexible, and hopefully more inclusive – perspective than ever before. It's this that will allow for a truly successful revival of theatre in 2021. Watch this space.