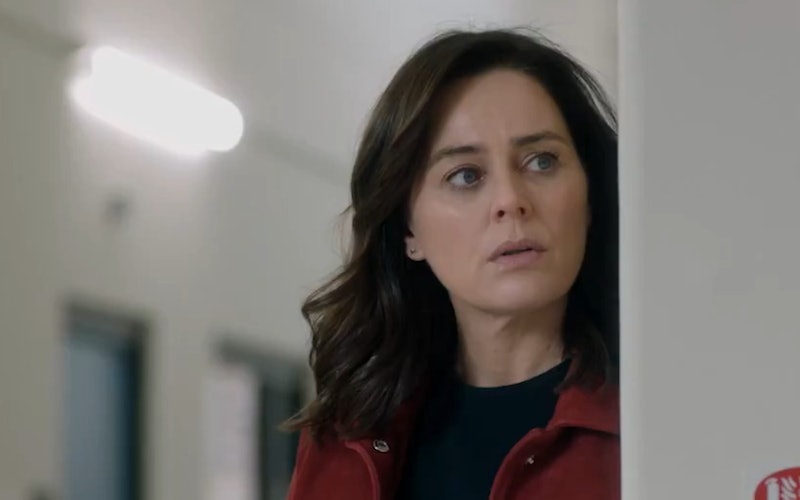 Channel 5's brand new "identity thriller," The Drowning tells the story of a mother whose son has been missing for eight years. Starring Eastenders and Coronation Street soap star Jill Halfpenny as grieving mum Jodie, the suspense-filled drama, sees her become fixated with a teenager she believes is her son. The four-part program is tipped to have viewers gripped when it's finally released early this year. Ahead of its release, here's everything you need to know about The Drowning.

Channel 5 released a first look of the intense drama earlier this week. It sees Jodie (played by Halfpenny) growing increasingly obsessed with Daniel (Cody Molko), a teenager who she spotted on the way to his school. "You're going to think I'm mad. It's Tom, I followed him all the way to the school gates," she says in the clip. From the looks of the tense trailer, Jodie's actions become increasingly concerning for her family, including Jason (Jonas Armstrong) Jodie’s only sibling and the only real support she has had in her life.

The Drowning also stars Rupert Penry-Jones as Daniel's Dad Mark, an architect, who tells his son to stay clear of Jodie after it becomes clear she's hellbent on proving he is her missing son. Tense. The star-studded casts also sees veteran actor Deborah Findlay as Jodie's mother Lynn.

So when will The Drowning actually be out?

Well, earlier this week, Jill Halfpenny teased that The Drowning would be coming "very, very soon" in a tweet, along with the trailer.

Filming took place in and around Dublin in Ireland last year, however, the production was delayed due to the pandemic. Yet, turns out there's not much longer to wait as according to Entertainment Daily, we can expect the new drama in February.

Alongside The Drowning's famous cast, comes a production team filled with recognisable names. Produced by actor and director Noel Clarke (Kidulthood, Dr Who) and Jason Maza (The Little Princess), The Drowning was co-written by famed Emmerdale writer Tim Dynevor. Dynevor is of course husband of Coronation Street actress Sally Dynevor, or for Bridgerton fans, Dad to Phoebe Dynevor.

All in all, we can expect The Drowning to be well-received by thriller fans who have been waiting for its arrival since last year

More like this
'Abbott Elementary' Fans Probably Missed This 'Parent Trap' Easter Egg
By Sam Ramsden
Everything To Know About The 'Daisy Jones & The Six' TV Series
By Maxine Harrison and Brad Witter
'Boiling Point's TV Sequel Is Set To Deliver A “Rollercoaster Of Emotions”
By Catharina Cheung and Sophie McEvoy
This First Look At 'The Gold' Shows Jack Lowden In A Whole New Light
By El Hunt and Sam Ramsden
Get The Very Best Of Bustle/UK
Sign up for Bustle UK's twice-weekly newsletter, featuring the latest must-watch TV, moving personal stories, and expert advice on the hottest viral buys.