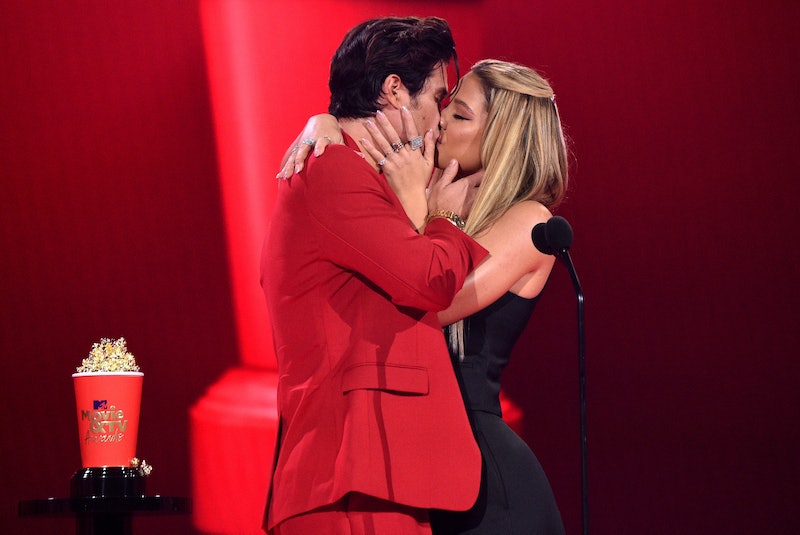 It’s a tale as old as time: Two people meet, fall in love on a huge new TV series, then fall in love all over again in real life. Chase Stokes and Madelyn Cline’s relationship timeline proves that while they’ve already been dating for a year, they first connected long before making it official, thanks to their breakout Netflix show Outer Banks.

After the premiere of Outer Banks in April 2020, viewers connected with the love story between John B. and Sarah, thanks to Stokes and Cline’s strong chemistry. “We wanted to make sure it was real and it had depth to it,” Cline told Seventeen about their onscreen romance in April. “There were things that Chase and I specifically added to the script that felt personal. You have to sell it. It’s got to be compelling.” Naturally, fans started rooting for them to get together in real life, with their wish coming true just a couple months later. Now, you’d be hard-pressed to find a celebrity couple as obsessed with each other as these two.

Fans first started to think that Stokes and Cline may actually be a real-life item when it was revealed that they were living together at the start of the coronavirus pandemic, along with their Outer Banks co-stars Rudy Pankow and Drew Starkey. They also started leaving flirty comments on Instagram that went beyond co-stars simply supporting each other. For instance, when Cline posted photos from 1883 Magazine spread, Stokes couldn’t help but respond with thirst. “Heart rate... decreasing... help,” he wrote.

After months of speculation, the co-stars made their real-life relationship Instagram official. Stokes shared a photo of Cline having dinner with him on the beach as they watched the sunset, captioning the post “Cats outta the bag” with a heart emoji. Cline re-posted the photo, writing that she had “fallen and I can’t get up.” Aww, young love.

After making the big reveal, they simply couldn’t stop gushing about each other. Just a couple days later, Cline posted an Outer Banks promo photo of her and Stokes, but dedicated it to their love in real life, writing, “This one.”

The couple aren’t just TV stars — they’re music video vixens. In September, Cline and Stokes returned to where it all started — the Outer Banks of North Carolina — to star in the music video for Kygo’s remix of “Hot Stuff,” Donna Summer’s iconic 1979 disco hit. The pair sneak into a local bar to steal a couple drinks and flirt, which ends with them dancing and making out — so basically, another onscreen representation of their actual romance.

In November, Cline gushed about her boyfriend to Entertainment Tonight, saying how surreal it was to star on a huge series with her loved one. “Love is tight,” she said. “It's cool to share this experience with your favorite people and also your favorite person. I feel very happy.” She also opened up about how they connected as friends first, and keep that same energy while filming.

“I think because we were friends before this, we understood how we worked as individuals before we were seeing each other,” she said. “When we go to set, we're individuals and we are still, at the very minimum, best friends and we are screen partners. We're there to support each other... I really, really love that and respect that about him and our relationship.”

The couple celebrated their one-year anniversary in April, proving that they were still going strong. “365 w/ u,” Stokes wrote on Instagram, sharing a sweet photo of Cline walking on the street. Cline commented on the post saying, “And I’d do it again.”

At the MTV Movie & TV Awards on May 16, the couple proved that their love was just as heated offscreen as it is on Outer Banks. After winning the Best Kiss award, Stokes freaked out onstage, pretending to forget the names of people he wanted to thank. But Cline saved the day in a move right out of her Outer Banks character Sarah’s playbook, telling him to “shut up” and planting a fat one on him, much to the crowd’s delight. It’s safe to say that there will be many more moments like this in the future, especially on Outer Banks Season 2.