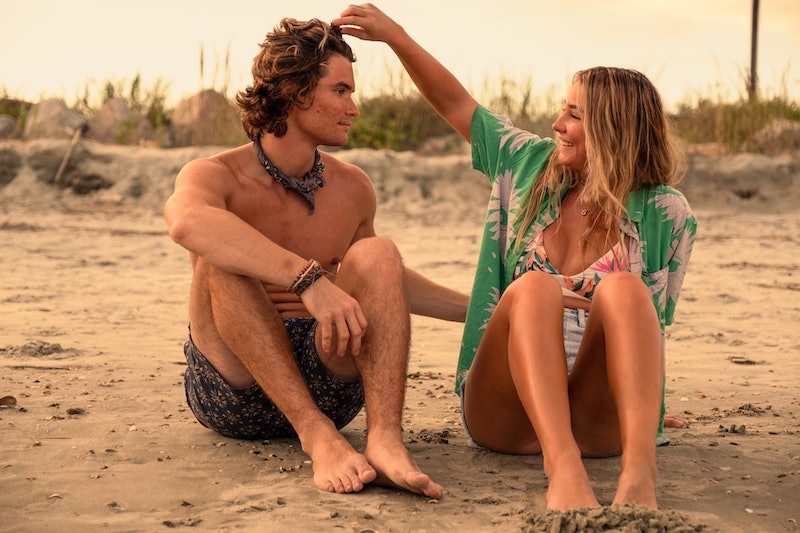 The streaming favorite that got subscribers through the earliest days of pandemic-induced TV marathoning is back. Outer Banks Season 2 just got a release date, and exciting new details tease what everyone’s favorite Pogues and Pogue-adjacents have been up to since Season 1’s thrilling cliffhanger. Just in case you forgot (because April 2020 feels 50 years ago), a brief refresher: By the end of the first season, it was revealed that Sarah’s dad, Ward Cameron, had killed Big John due to a disagreement over how to split that sought-after treasure. After telling the authorities, though, John B. and Sarah’s boat capsized, leaving their friends and family back on land to presume them dead. Viewers, of course, knew better and watched as the couple caught a ride to the Bahamas — where the gold is — on a passing ship.

Now that you’re caught up, here is everything we know about Outer Banks Season 2 so far, from the plot to the release date and intriguing first-look photos.

In a statement released by Netflix, Outer Banks executive producers Jonas Pate, Josh Pate, and Shannon Burke described the upcoming installment as a “wild ride” that will “test our crew like never before.” The statement reads, “We've turned up the dial on everything fans loved about Season 1 — more mystery, more romance, and higher stakes. It's a full throttle, action-packed adventure.”

According to Netflix, the plot of Outer Banks Season 2 will apparently pick up where the first entry left off, with John B. and Sarah still in the Bahamas, where they are very much “in over their heads.”

“New friends also bring new foes as they’re back on the trail of the gold, while the stakes for Kiara, Pope, and JJ rapidly escalate at home. The $400M is still in the game, but will the uncovering of a new-found secret reunite the group for a fresh mission? The adventure of a lifetime awaits, but uncharted waters ahead mean our Pogues must do all they can to make it out alive.”

Beyond the tease of swashbuckling adventure, what happens next is anyone’s guess. Last April, the Outer Banks cast shared a few of their own theories with Bustle. Sarah’s Madelyn Cline compared her character’s situation with John B. (Chase Stokes) to a “Castaway-ish” adventure mixed with a bit of idyllic island romance — notwithstanding the difficult reality that will, inevitably, “catch up to them.” Stokes echoed the sense of impending trouble, admitting that “I don't know how many lives [John B.'s] got left, at this point.”

In addition to the core lineup we met in Season 1, expect to see at least one new face in Outer Banks Season 2. In April, Deadline announced that Carlacia Grant had joined the cast, too. Grant will be playing Cleo, a “confident and fearless ... Nassau girl, a formidable artful dodger, whose world collides with the Pogues.”

In June, Netflix announced that Outer Banks Season 2 will premiere on July 30 and released a teaser that shows the Pogues memorializing Sarah and John B — who are, of course, not actually dead but are on their own island adventure in the Bahamas.

The streamer followed up with a full trailer on July 14, offering a closer look at the high-octane adventure the second season has in store. The trailer points to a dangerous situation for Sarah and John B. — specifically the latter, who’s been falsely accused of killing Sheriff Peterkin.

Back home, the Pogues embark upon a treasure hunt — but don’t expect them to be apart from John B. and Sarah for too long, as the friends appear to reunite safely at some point.

In addition to photos released earlier this year (one of which shows the Cameron family in funeral garb), the streamer shared a new batch of first-look photos.

This post will be updated with additional details as more information on Outer Banks Season 2 becomes available.

This article was originally published on May 14, 2021