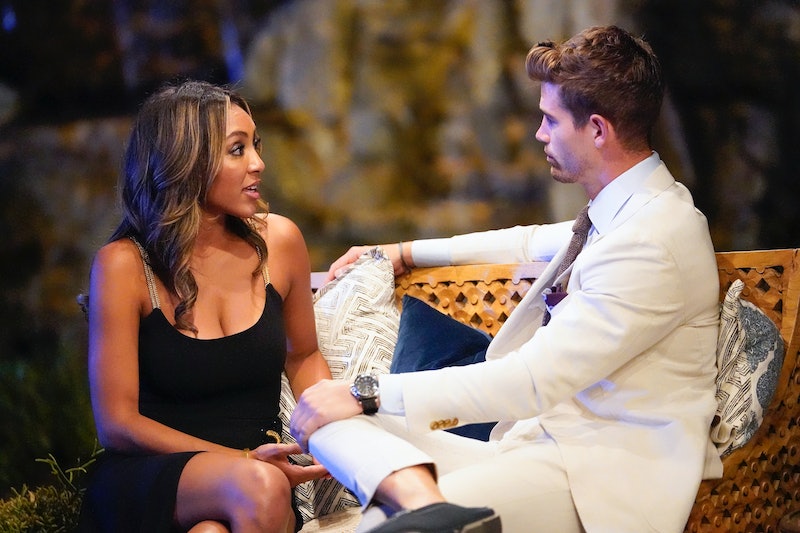 The Bachelorette franchise has had its fair share of petty feuds, but the fight between Chasen and Ed may go down as one of the show's most pointless argument — and this is just one season after "Champagne-gate." Ironically, the fight went down after Tayshia hosted a "Grown Ass Man" competition for her group date, which caused the men to debate who amongst them was a "real man" and who was, as Ed put it, "a fraud and a phony."

It all began with Bennett, who accused Chasen of still being interested in Clare and faking his connection with Tayshia. When the model attempted to defend himself by saying that it was "hard to pivot" after learning that Clare was only ever interested in Dale, Ed jumped in to accuse him of being inauthentic. "You're not here [with] the right intentions," Ed said. "You're a bad actor. You have no future with that." Chasen's response: "It's hard to take you seriously. You're holding a baby, you have chicken legs, and you lost the competition."

If you just rolled your eyes, you're not alone. Bachelorette fans flooded social media with posts about how uninterested they were in seeing this pointless drama take up the entire episode:

Things escalated even more when Ed spent his one-on-one time with Tayshia telling her that Chasen is a "different guy when the cameras are around" and that he's not there for "the right reasons." Though Chasen calmly defended himself to Tayshia, things got more intense when he returned and confronted Ed about bringing up his name. "You're interfering with something that I'm trying to grow right now, and I don't appreciate that," Chasen said. "Yes, there was a previous Bachelorette. I have pivoted [to focus on Tayshia]."

Despite many, many attempts to convince the pair to squash their beef — because, like Zac. C. said, everyone in the house "could not care less" — they just wouldn't let it go. There was Chasen's awkward pre-cocktail ceremony speech to everyone, where he explained that he had "pivoted" from Clare to Tayshia. There was Bennett and Ed laughing over Chasen's use of the word "smokeshow."

Things even carried over into the next group date after both Chasen and Ed somehow both earned a rose and prepared to face off in the wrestling ring to settle the score. (Ed ended up backing out due to a shoulder injury.) Throughout it all, exasperated Bachelorette fans just wished they never had to hear the phrase "grown ass man" ever again — and that everyone could please, dear god move on from the Bachelorette's pettiest drama of all time.