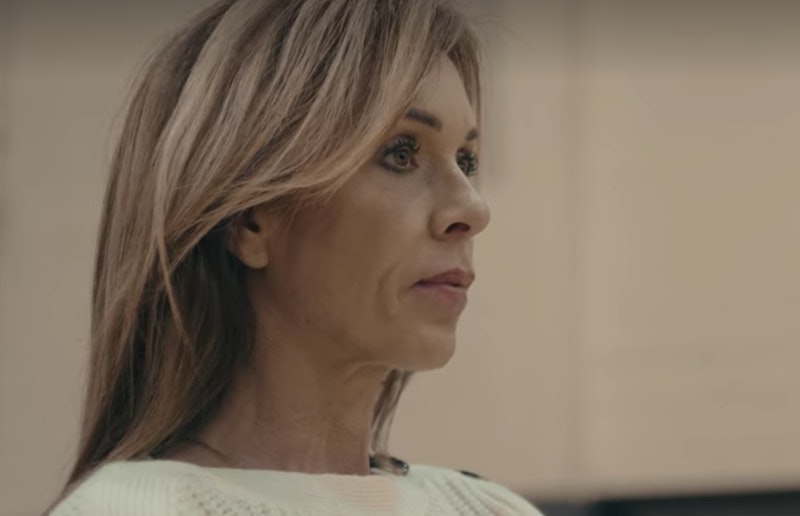 In the wake of the stunning charges against one of her athletes, Cheer coach Monica Aldama addressed Jerry Harris’ arrest and said she was “devastated” about the news in a September 2020 statement. Sharing her initial thoughts on Instagram, Aldama asked for privacy to be extended to the Navarro Cheer family during this “heartbreaking time.”

A breakout star from the Netflix cheerleading docuseries Cheer, Harris was arrested and charged with producing child pornography on Thursday, Sept. 17, following a week-long FBI investigation. Bustle reached out to reps for the TV star after his arrest but did not receive an immediate response. According to the complaint filed in the U.S. District Court in Chicago, Harris, 21, has been charged with allegedly soliciting sexually explicit videos and photographs, as well as oral sex, from an underaged boy. A spokesperson for the athlete disputed the claims in a statement days before his arrest. “We categorically dispute the claims made against Jerry Harris, which are alleged to have occurred when he was a teenager,” Harris’ spokesperson stated that Monday. “We are confident that when the investigation is completed the true facts will be revealed.”

“My heart is shattered into a million pieces,” Aldama’s statement read. “I am devastated by this shocking, unexpected news. Our children must be protected from abuse and exploitation, and I'm praying hard for the victims and everyone affected.” A spokesperson for Netflix also issued a statement to People on Sept. 17, 2020, saying, “Like everyone we are shocked by this news. Any abuse of minors is a terrible crime and we respect the legal process.”

The following day, Navarro Cheer released a statement on Instagram nearly identical to Aldama’s. Cheer stars Allie Ross, Mackenzie Sherburn, and TT Barker re-shared Navarro Cheer’s statement on their respective Instagram Stories, while Gabi Butler and La’Darius Marshall shared their own reactions via social media. “To be clear, although I have been a close friend and teammate with Jerry, I was never aware of anything like that he has been accused of taking place,” read Butler’s statement, per Us Weekly. “I believe the protection of children is more important than ever in today’s world.”

In Marshall’s post about Harris, the athlete expressed shock and spoke of his own past experiences, which he previously opened up about in Season 1. “As a victim of sexual abuse as a child, I know all too well the pain of experiencing this type of abuse and the difficulties it can create for life after such trauma,” he wrote. “My heart goes out to all who may be affected by this behavior from adults.”

Since news broke of the charges, Harris has been suspended from participating in U.S. All Star Federation events and cheerleading competitions, per USA Today. The Cheer star previously inked endorsements with Walmart and Cheerios, but a spokesperson for General Mills, the company that owns Cheerios, confirmed to the publication on Sept. 14, 2020, amid the pre-arrest investigation, that it had suspended its partnership with Harris.

Prosecutors charged Harris with seven additional counts in the child pornography case on Dec. 10, 2020, with NBC News reporting he allegedly traveled from Texas to Florida “for the purpose of engaging in illicit sexual conduct” with a minor and used the internet to “persuade, induce, and entice” a minor into sexual relations. The incidents reportedly took place between August 2017 and August 2020, with four alleged victims in Florida, Illinois, and Texas.

“We are grateful that the U.S. Attorney and the FBI have continued to investigate this case, locate additional victims and take action,” attorneys Morgan Stewart and Sarah Klein stated. “This was made possible because our clients’ mother initially had the courage to report Harris to the FBI and provided evidentiary proof of the manipulation, sexual harassment, abuse, and exploitation that her sons had suffered.”

“We urge the authorities to undertake a thorough investigation of the United States All-Star Federation, Varsity Spirit, and Cheer Athletics,” continued their statement, “To determine which of their executives, employees, and representatives could have stopped Harris’ abuse and failed to do so.”

Speaking to The New York Times for a profile ahead of Cheer Season 2’s premiere on Jan. 12, Aldama revealed Harris sent her a letter after the news of his charges broke. Whether or not she replied is unclear, though she also claimed to have briefly spoken to the ex-athlete while a Navarro cheerleader was on the phone with him during a practice. “I still can barely talk about it without crying,” she commented while reportedly “tearing up.”

This article was originally published on Sep. 18, 2020