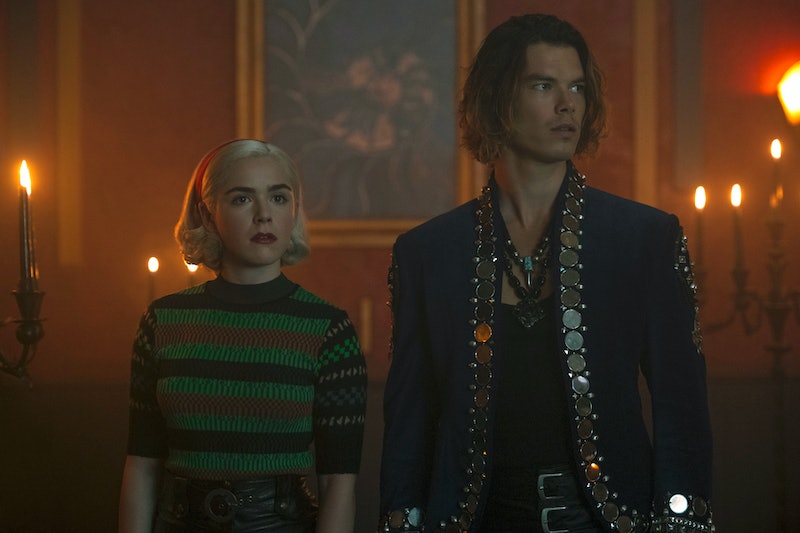 A lot happened in The Chilling Adventures of Sabrina Part 3. After finally ascending to the throne of hell, Sabrina began running the underworld while fending off Caliban, who wanted the crown for himself. Meanwhile, pagan gods arrived in Greendale with a nefarious plan of their own, and Lucifer returned with a vengeance after being trapped at the end of Part 2. This all culminated in a mind-bending finale during which basically everyone died and Sabrina had to create a paradoxical time loop to fix everything. Confused? Here's a quick refresher ahead of the show's fourth and final season.

Sabrina Becomes the Queen of Hell

At the start of Part 3, Sabrina, Harvey, Rosalind, and Theo travel to Hell to save Nick Scratch, who offered his body as a cage for Lucifer in the Part 2 finale. Lilith eventually frees Nick, on one condition: she asks that Sabrina publicly crown her as the Queen of Hell so that the Kings of Hell will finally accept her authority. The Kings aren't having it though, and after Lucifer warns that the Old Ones (pagan gods) will attack while Hell is in disorder, Sabrina takes the throne instead.

This comes with all kinds of new responsibilities for Sabrina, like entrapping souls, competing with the Prince of Hell, and protecting Greendale from the Old Ones.

Rather than acknowledge Lilith or Sabrina's authority, the Kings of Hell nominate Caliban — the Prince of Hell who was molded from Hell's clay — for the throne. Caliban then proposes that he and Sabrina compete for the Unholy Regalia, three infernal artifacts lost in time. Whoever manages to find all three will be crowned the ruler of Hell.

It's a close competition, and at one point Caliban suggests that he's willing to rule alongside Sabrina if they get married and become King and Queen. But Sabrina refuses, and in the end Caliban wins the final challenge — that is, until Sabrina's clever time loop reverses everything.

With the help of voodoo priestess Marie LaFleur, Prudence and Ambrose manage to track down a grizzled Blackwood to Loch Ness, where he was experimenting with time magic. They catch him trying to sacrifice his children, Judas and Judith (who are now full-grown teenagers), to a giant Eldritch monster in exchange for a mysterious time egg. Ambrose stops Prudence from killing Blackwood, so they're all brought back to the Academy. Blackwood's body is used as the new cage for Lucifer, freeing Nick.

Bringing Blackwood back turns out to be a huge mistake, though, as Lucifer goes on a rampage, teams up with the Old Gods, and kills Dorcas. Heartbroken that she could've prevented her sister's death had she just killed Blackwood from the get-go, Prudence breaks up with Ambrose.

Nick Wrestles With His Demons — Literally

He eventually detoxes with the help of Ambrose, but the damage is done. He breaks up with Sabrina, telling her he needs time and space to sort things out. During the finale, Nick and Prudence sit on the steps outside the Academy and bond over their shared loneliness.

With Father Blackwood gone, Zelda becomes both the directrix of the Academy and the high priestess of the Church of Night. She pledges that they'll now worship Lilith, but their powers begin to wane when Lucifer denies them his gifts. Lucifer teams up with the Old Gods to destroy the women, so Zelda makes the decision to call upon the ostracized hedge witches to create a new coven. They pledge themselves to the ancient goddess Hecate and destroy the Old Gods and their Green Man.

Zelda also comes into her own queer identity in Part 3. She realizes she's attracted to Marie LaFleur, and in the finale the two share a kiss.

When the pagans roll into town, a shy hobgoblin named Robin is tasked with getting close to Theo with the goal of sacrificing him to the Green Man. Robin obliges, but ends up falling in love with Theo in the process. Theo confides in Robin about his trans identity, and based on the trailers for Part 4, the two are still going strong.

Meanwhile, Sabrina learns that Harvey still has feelings for her, so she uses a spell to remove her love for him and spare Roz's feelings.

There Are Two Sabrinas Now

After losing the final Regalia challenge against Caliban, Sabrina becomes frozen in stone for years. Without her, Caliban fails to defeat the Old Gods, and all her friends die except for Ambrose, who hides in the mines with the time egg. Luckily, a future version of Sabrina arrives to swap places with current Sabrina. She then wins all of the Unholy Regalia and essentially rewinds the apocalypse. The witches pray to Hecate, kill the Green Man, and chase the rest of the pagans out of town.

In the end, Sabrina is supposed to combine her two selves, but she decides to keep them separate. It's the perfect way for her to be a normal Greendale teen and the Queen of Hell, which she was actually beginning to enjoy. It sounds simple, but will undoubtedly cause complications in Season 4.

Blackwood & Lucifer Plot In the Shadows

Two other major things happen near the end that will play into Season 4. Fearing for her life after Lucifer breaks free, Lilith allows herself to become pregnant with Lucifer's son. Lucifer seems pretty pleased about this, hinting that one day Sabrina's baby brother could take the throne from her.

Blackwood, meanwhile, escapes into the woods with Agatha and his twin kids. There, he stabs the giant Eldritch egg with a knife, saying ominously that this is "the beginning of the end ... the end of the Spellmans ... the end of all things."

More like this
Twitter Is Pouring Out Some Zhampagne As ‘Schitt’s Creek’ Leaves Netflix
By Brad Witter
'Heartstopper' S2 Just Welcomed Four Brand New Cast Members
By Nola Ojomu and Sam Ramsden
The ‘You’ Season 4 First Look Shows Joe’s New Identity And Potential Victims
By Bustle Editors
Nicola Coughlan Shared A Lady Whistledown Excerpt From ‘Bridgerton’ Season 3
By Grace Wehniainen, Alyssa Lapid and Sam Ramsden
Get Even More From Bustle — Sign Up For The Newsletter