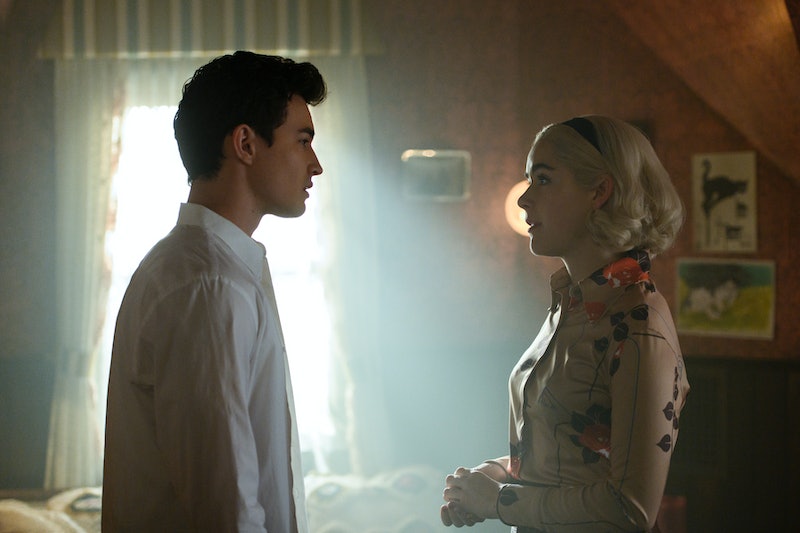 Spoilers ahead for The Chilling Adventures of Sabrina series finale. There's only one word to describe the CAOS series finale: bad. The season started out fine enough, with Sabrina and her friends battling a series of Eldritch Terrors unleashed by Father Blackwood. But as the season neared its close, the show rushed to tie up loose ends, culminating in what's sure to be a divisive conclusion. Let's break it down, shall we?

At the start of the series finale, Sabrina's duplicate, Sabrina Morningstar, meets her demise. Though she managed to escape the parallel universe she visited in an attempt to stop the last and most dangerous Eldtritch terror — The Void — she succumbs to injuries sustained on the way back, dying just after warning Sabrina Spellman that The Void is on its way.

Determined to save her friends and family members, Sabrina goes into The Void hoping to trap it within Pandora's Box. The plan seems to work, but when her panicked aunts discover what she's up to, they pull her soul back prematurely — bringing a piece of The Void along with her. They're not able to salvage Spellman's physical body, so they put her soul into Morningstar's, after which she begins accidentally making people and things disappear because The Void has become a part of her.

In order avoid hurting anyone else, Spellman retreats into isolation, where she's eventually tracked down by Father Blackwood. She allows him to study alongside her as she learns more about The Void — in the hopes of destroying it herself.

Upon learning that Sabrina is with Blackwood, her friends and family set out to save her. They bring a fake Pandora's Box, which Blackwood opens, blinding him. Still, Sabrina insists they follow through with Blackwood's plan: cutting her open to remove The Void (which he intended to ingest himself).

Sabrina insists that she can hold on long enough as everyone works to expel The Void from her body and trap it in Pandora's Box, while also sealing the Eldritch Terrors in it and rescuing the people she accidentally trapped inside (including Roz, Prudence, and Harvey's dad, though she tells them to leave Caliban).

The mission is successful, but it takes just a little bit too much time, and Sabrina dies. After burying both Sabrina Morningstar and Sabrina Spellman, Aunt Hilda moves back in with Aunt Zelda so she won't be alone. We don't really see what happens to Harvey, Roz, Theo, and Robin. Maybe the writers just...forgot about them?

Last season, Satan helped make Father Blackwood immortal. But a determined Prudence nonetheless attacks him with a chainsaw, intending to spread his body to "the four corners of the Earth." At the end of the finale, however, we see Mary Wardwell preaching to a congregation on behalf of a "Reverend Lovecraft," who's written the story of Sabrina's battle against the Eldritch Terrors. As Mary closes the book, she says the name "Faustus." So like...is he still alive? Like much of the finale, it's not really clear.

Wanting more power, Lilith stabs Lucifer and drinks his celestial blood, presumably ingesting his powers along with it. She then banishes him to the mortal realm, and is now assumedly ruling Hell in his place.

Sabrina and Nick Reunite In The Afterlife

In the final moments of the show, Sabrina sits in a room labeled "The Sweet Hereafter," where Nick joins her. He reveals that he drowned in the "wicked undertow" of the Sea of Sorrows, implying that he did so intentionally so he could be with Sabrina. She seems upset for approximately 10 seconds, but Nick reminds her that "What's important is that we're together here forever and ever," to which she responds, "That is a bonus" before kissing him.

What this all amounts to is a convoluted, unsatisfying, and misguided finale that seemingly glorifies suicide for the sake of two characters ending up together. That's particularly disappointing for a show that has always put Sabrina's independence and agency at the forefront, even as she navigated several romances (and doubly so for a streaming service that already aired one problematic teen series about suicide).

Though Sabrina's approach has at times been self-indulgent and misguided, she does have a genuine care for her loved ones, so you'd think she'd show more than momentary concern about her boyfriend's apparent suicide on her behalf. Instead, she dies a martyr without having to account for her own role in almost causing the apocalypse (let's not forget that if she hadn't kept Sabrina Morningstar around, the cosmos never would have been thrown into disarray) and relishes in a happily ever after given to her at someone else's expense. It's a cheap ending to what could have been a much better show, though one that at the very least softens the blow of it being canceled. Clearly, it was time.

More like this
Watch The Thrilling Teaser Trailer Of 'Shadow And Bone' Season 2
By Gretchen Smail, Jack Irvin and Sophie McEvoy
Mike Flanagan Teases 'The Midnight Club' In This Exclusive, Creepy Clip
By Grace Wehniainen
'Firefly Lane' Season 2 Will Be The Show's Last — But There's A Twist
By K.W. Colyard and Grace Wehniainen
The 'Heartstopper' Cast Were Spotted Filming In A Major City
By Nola Ojomu and Sam Ramsden
Get Even More From Bustle — Sign Up For The Newsletter