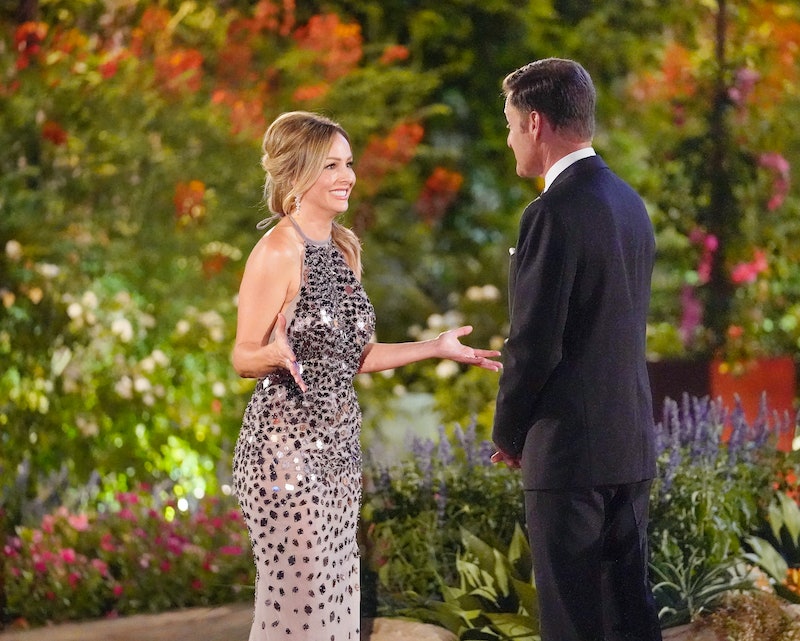 Nearly a week before Clare Crawley's season is set to premiere, Chris Harrison teased a "historic" twist in a new Bachelorette promo. Though the promo doesn't directly acknowledge rumors that Tayshia Adams would be replacing Clare as Bachelorette, it does show what appears to be fifteen contestants threatening to walk off the show, which could tease what might happen if Clare leaves mid-season.

The Bachelorette reportedly left the show after falling in love with one of the contestants, and though ABC has not confirmed the potential shift, it's widely believed Tayshia will take up the role as Bachelorette for the remainder of the season. And the new Bachelorette trailer, released Monday, Oct. 5, seemed to hint at the shakeup, with the voiceover teasing: "Even if you think you know what happens, you're not that Clare-voyant."

Meanwhile, Chris Harrison remained tight-lipped about Clare's departure during an interview with E! News on Monday, saying, "This whole season is all about her finding love. Lord knows she waited long enough." He did, however, acknowledge the rumors, saying coyly, "I don't know where these wild rumors come from," and that "everybody will have to wait and see what happens," as per E! News. Even if Clare doesn't duck out of the show early, the new season promises to bring the drama. And Harrison teased that the secluded filming location provided "a different element" to the new season, promising fans they'll get to see "everything, every conversation, every decision" made behind the scenes.

In a separate interview, the Bachelor host also confirmed that it would an unprecedented season on, telling People that even the most jaded producers on the show, who always go into a new season "thinking nothing can top what we’ve just witnessed," were surprised by the season. He added, "Claire provides the most explosive season we’ve ever had." In fact, in a promo released a few weeks ago, Harrison took it even further, telling Clare she had "blown up The Bachelorette."