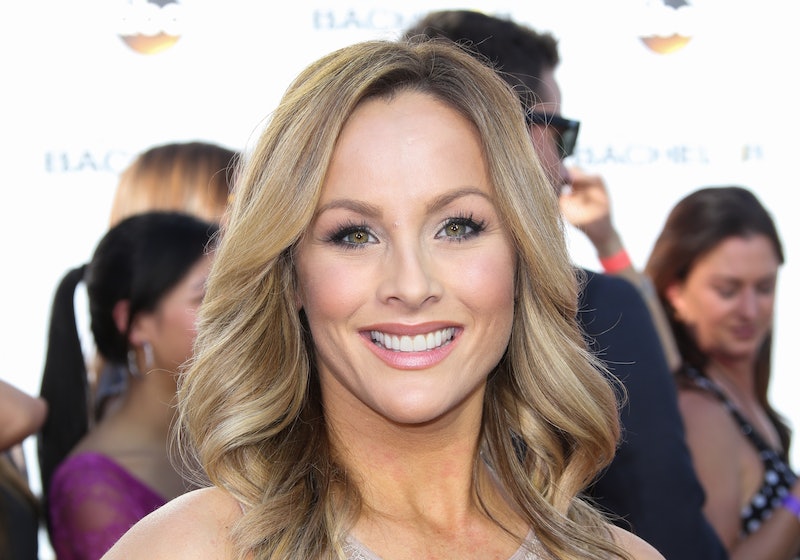 Fans may have to wait until October 13 to get some "Clare-ity" about what really happened while The Bachelorette, was filming but one thing is for sure: Clare Crawley's season will be packed with drama. In the latest promo for the hairdresser's upcoming season of the franchise, Chris Harrison says Clare has "blown up The Bachelorette." But don't worry, the promo also teases all of the kissing, crying and fighting that comes along with any televised journey for love.

"Drama this soon is a little bit crazy," Clare tells the camera at the start of the clip, before she is seen telling someone that she is "so falling in love with you." And while the new Bachelorette is seen kissing a couple of lucky men — most notably, a blindfolded Dale Moss, the former NFL player who reportedly stole her heart — the promo primarily hints that Clare has managed to pack quite a lot of drama into her shortened tenure as the lead.

"We caught you in a lie," one of the contestants accuses, before Clare lays into another with the same level of ferocity that she showed Juan Pablo Galavis back in 2014. "I'm not done yet," the contestant tells Clare, to which she responds with a definitive, "You are done. Get out of here." However, the most dramatic moment of the teaser comes at the very end, during a conversation between Chris Harrison and Clare in what appears to be her hotel suite. "Congratulations," the host says. "You've just blown up The Bachelorette."

While it's unclear what, exactly, Clare has done to "blow up" the show, Harrison's comment is the first time that ABC and the Bachelorette franchise have officially acknowledged the reports that Tayshia Adams replaced Clare as Bachelorette, after the latter reportedly fell in love and decided to leave the show to avoid leading the rest of her contestants on. In early August, Deadline reported that the upcoming season will showcase Clare's exit from the show as well as Tayshia's subsequent introduction and journey to find love of her own.

Based on all of the fighting and drama teased in the newest promo, it's not surprising that Clare would decide to leave The Bachelorette early, as the hairdresser has frequently mentioned that she knows exactly what she wants in a partner. "I know what I will and won’t put up with," Clare told People back in March. "I want a man comfortable in stuff he’s been through and self-aware enough to know what he’s learned. I need a level of maturity for sure." She added that she's looking for a man who "I can bring home and watch TV with on a Friday night, who doesn’t want to be in the spotlight," despite the attention that comes with being on The Bachelorette.

Tayshia, meanwhile, hasn't been as open about the qualities she's looking for in a man, but the former phlebotomist has spoken about her desire to get her very own happy ending by competing on the franchise. "I think [seeing Rachel Lindsay fall in love is] what encouraged me to go on it," Tayshia said, during an appearance on The Bachelor: The Greatest Seasons — Ever!. "Because I feel like she was so true and authentic to herself and, at the end of the day, she got her person. She is happily married now, and she got her fairy tale ending, and that's what I wanted. So, she gave us hope."

More like this
Yes, That Is Victoria & Another ‘BiP’ Alum In Zach’s ‘Bachelor’ Trailer
By Kadin Burnett and Grace Wehniainen
Why Wasn't Teddi At The 'Bachelor In Paradise' Reunion?
By Brad Witter
Khloé Kardashian’s Son Was Born A Week Before Anyone Realized
By Jake Viswanath
Twitter Is Saying The Same Thing About Jill Scott Winning 'I’m A Celeb'
By Sophie McEvoy
Get Even More From Bustle — Sign Up For The Newsletter