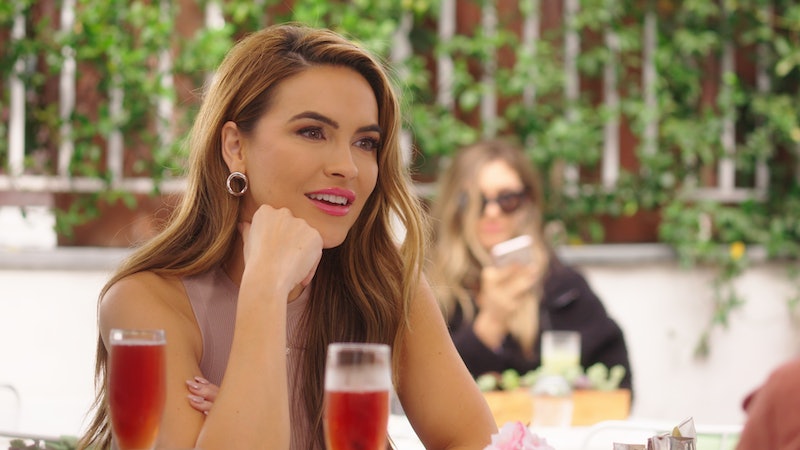 While she appreciates her passionate fans, Chrishell Stause defended a Selling Sunset co-star from online bullying in a cryptic tweet on Saturday, Aug. 8. The reality star didn't name names in her tweet, but one look at her replies suggests that she's referring to Davina Potratz, who, in an episode of Season 3, questioned her about the abrupt end of her marriage to Justin Hartley during fellow co-star Christine Quinn's wedding. Due to the vagueness of the tweet, some fans guessed that Stause was actually defending Hartley, but she cleared that mystery up when she replied to one fan's tweet with, "I am trying to help what I see towards someone else in the cast."

Season 3 of Selling Sunset, which premiered Aug. 7 on Netflix, has no shortage of drama, and much of it is fueled by Stause's sudden separation from This Is Us star Hartley. Potratz seems to have found herself on the receiving end of backlash from viewers after she suggested her co-star wasn't sharing the full story about her split. (Early in the season, Stause claims that she found out Hartley had filed for divorce via text; Bustle previously reached out to Hartley's reps for comment on her claim, but did not hear back at the time of publication.)

Now, Stause is seemingly sticking up for Potratz, asking that fans not go on the attack. In a tweet thanking everyone for supporting her and Selling Sunset, the actor added, "That being said, some of you are attacking a certain person in defending me. I appreciate the sentiment because certain things made me mad too. But I hate feeling like someone is getting bullied."

The former soap star was careful not to name names, but she did seem to confirm that this "certain person" in question is a woman in a followup tweet. "Want to help empower women and if my tweet has any say at all I just hope you can keep the passion but maybe minus the vitriol..?" she added. "Love you guys SO much though and LOVE your enthusiasm!"

For her part, Potratz has spoken out about being given the "villain" edit by producers, which she believes portrays her in an unfair light. In a recent interview with Reality Blurb, she claimed that the show doesn't include moments that reveal her "warm" side or her sense of humor in order to portray her as "cold or mean." "I'm actually not at all. I'm none of those things," she said. "I consider myself as very honest and I can be direct. I’ll just come right out and say that and some people are not that way. I’m not trying to be offensive or rude. Some people take it that way."

As for her confronting Stause during Quinn's wedding, the reality star maintains that viewers didn't see the whole conversation. She recently told Entertainment Tonight, "I was not intending to offend Chrishell and I was truly having a conversation to try and understand the situation a little bit and try to be more compassionate." Potratz's fellow costars agree that the entire conversation wasn't shown, but they also aren't defending her decision to bring up Stause's recent split during Quinn's big day.

The one thing all the women seem to agree on is that production handled the situation badly. In the same interview with ET, Quinn made it clear that she wasn't happy to see her wedding sidelined in favor of the show emphasizing the drama between Potratz and Stause. "The juice sometimes isn’t worth the squeeze when you see what’s on camera," she said.

It's impossible to control how viewers react to what they see onscreen, but both Stause and Quinn seem determined to keep the Selling Sunset team united. On Sunday, Quinn tweeted, "The cast of Selling Sunset had a come to Jesus tonight. Above all the [bullsh*t], we are family. And family may fight, and may say they are 'acting' like a f*cking idiot. But at the end of the day, we love each other. We are crazy, we are dysfunctional. We are The Oppenheim Group."