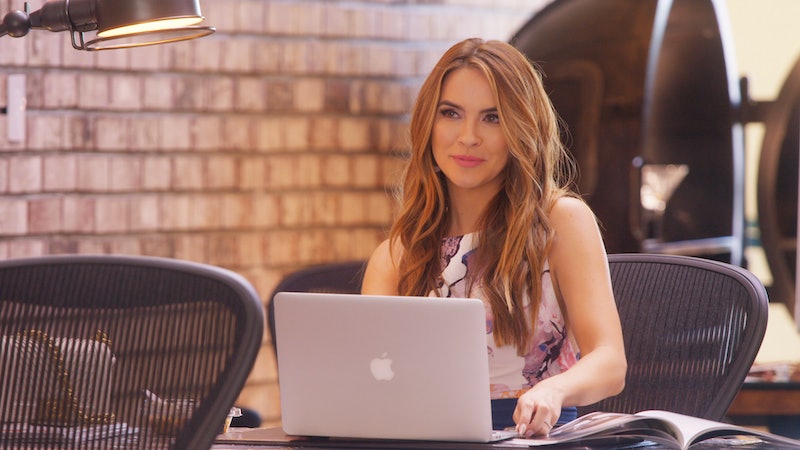 The newly released second season of Netflix's reality hit Selling Sunset is as much about relationship drama as it is about real estate. Cast member Heather Rae Young is caught up in the early days of dating HGTV host Tarek El Moussa. Christine Quinn is engaged to a millionaire client. And Mary Fitzgerald is planning her wedding, with friend and colleague Chrishell Stause in tow to visit venues and choose a dress. At one point, Chrishell even mediates a brewing fight at Mary's bachelorette party, not knowing what fans of the show already did when Selling Sunset Season 2 premiered: that Chrishell's marriage to This Is Us star Justin Hartley will end just months after Mary says "I do." While the divorce isn't covered in the new episodes, it's heavily teased in upcoming scenes from what is assumedly Season 3.

"I don't really want to go back to that place," Chrishell tells Bustle. "I dread reliving that.”

Hartley unexpectedly filed for divorce in November 2019 after two years of marriage, a move that left Stause "in shock," she says in the teaser that ends the Season 2 finale. "Who do I talk to now?" she asks Mary through tears. "I love him so much. This was my best friend."

That was six months ago; now, Chrishell is understandably reluctant to dive back in to those raw feelings. "The only time I really address it is on the show, because I didn't have a choice in the timing of everything that happened," she explains, adding that while she was fully aware of the privacy trade-offs reality TV might entail, she didn't go in with much concern.

"Adam DiVello is the creator of the show, and he is the person that brought us The Hills and Laguna Beach and all those shows that blend this kind of a personal drama, if you want to use that word, with what we're dealing with, which is real estate," says Chrishell, who starred on All My Children for six years before she started selling houses. "When I said yes to this show, I didn't have any personal drama, so it was easy to be like, 'Oh, OK, sure.' It's a little different now."

But life isn't only different in ways Chrishell would rather avoid discussing. She's excited that her mom, who was diagnosed with lung cancer, is "doing better." Minutes before our interview, she learned she was nominated for a daytime Emmy for her guest starring turn on Days of Our Lives. She also signed with a new agency, UTA, in April and is sending out audition tapes.

"I know we're in the middle of a pandemic, but there are so many things I'm immensely grateful for that I'm focusing on," Chrishell says. "And all the other stuff? You got to keep it moving."

More like this
Move Over, 'Sunset'! The Drama-Filled Trailer For 'Selling The OC' Is Here
By Nola Ojomu
One Of 'Selling Sunset's New Cast Members Just Had A Baby With Nick Cannon
By Orla Pentelow and Brad Witter
'Indian Matchmaking's Pradhyuman & Ashima Have Made No Secret Of Their Marital Status
By Brad Witter
Shital Dropped Major Hints About Her Relationship With Niraj After 'Indian Matchmaking'
By Brad Witter
Get Even More From Bustle — Sign Up For The Newsletter