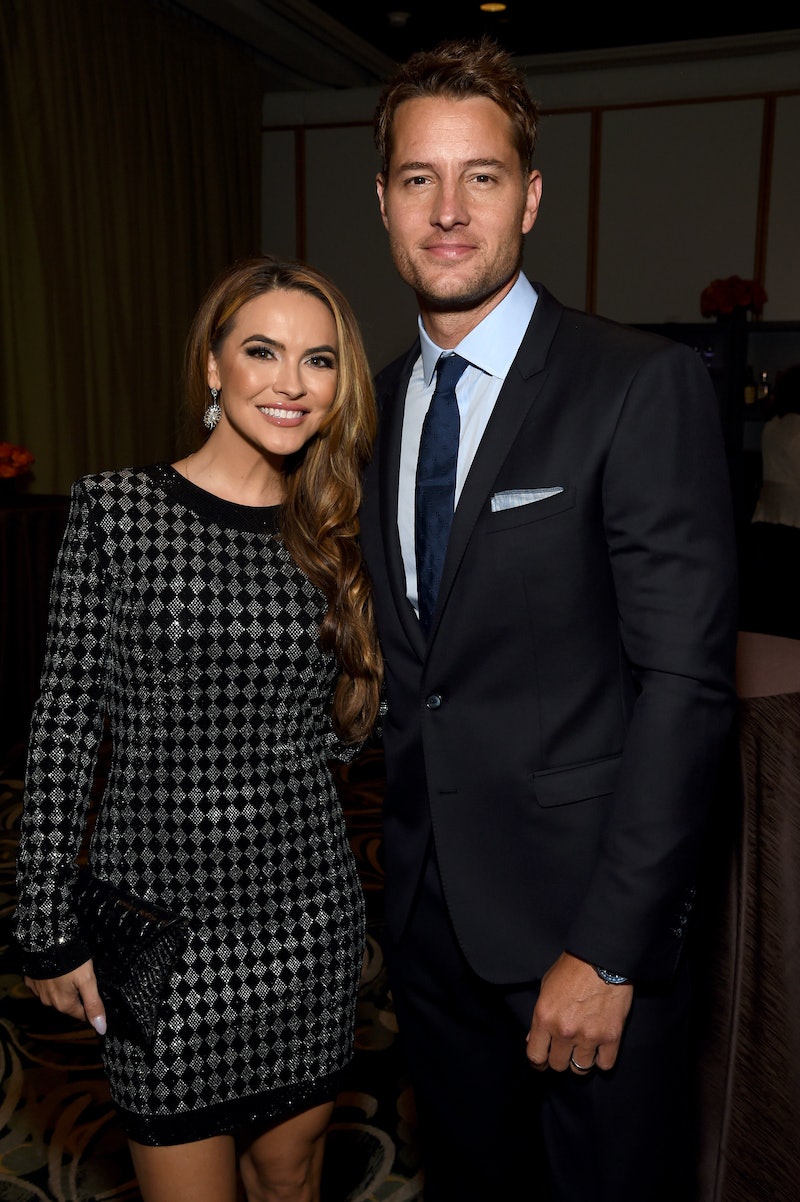 Chrishell Stause and Justin Hartley may be getting a divorce, but the Selling Sunset star will always have a lot of love for her stepdaughter. In the new season of Selling Sunset — which premiered on Netflix on August 7 — Stause revealed she wrote a goodbye letter to Justin Hartley's daughter, Isabella after he filed for divorce. The This Is Us star welcomed Isabella in 2004 with his ex-wife, Lindsay Hartley in 2004; though Hartley and Lindsay co-parent Isabella together, Stause became close with the 16-year-old over the course of her six-year relationship with Hartley.

While talking about the divorce with her Selling Sunset costar Amanza Smith in the sixth episode of Season 3, Stause broke down crying while talking about Isabella. "What about his daughter, have you talked to her?" Smith asked, to which Stause revealed that, "I love her so much, and I had to write a letter to her." The Days of Our Lives alum then burst into tears, explaining that the whole situation "sucks" and that she just wanted to "hide under a rock" until it was all over.

In November 2019, People reported that Hartley had filed for divorce from Stause after two years of marriage. At the time, a source told the outlet that the couple had "been having trouble for a while," and that they wanted different things from their relationship. "In many ways, they’re somewhat fundamentally incompatible," the source said, adding that "Chrishell is really ready to just settle down ... and was hoping to start a family relatively soon," while Hartley "is at a point in his career where he wants to really be able to explore all the options that are coming his way."

On the new season of Selling Sunset — which was filmed in the midst of Hartley and Stause's split — the reality star claimed that she was "blindsided" by the divorce filing, and that she only learned about it minutes before the news became public. "We had a fight that morning over the phone, and ... we didn't [have a chance to] talk things through," Stause explained. "Before we had a chance to figure things out, he filed. ... He texted me that we were filed. Forty-five minutes later, the world knew." (Bustle reached out to Justin Hartley's reps for comment on Stause's claim that she was notified about the filing via text, but did not hear back by the time of publication.)

While chatting about the situation with her costar Mary Fitzgerald, Stause admitted that she didn't think Hartley was serious about asking for a divorce at first. "In a fight, like that's his go-to. Like, 'I'm out, I'm out.' I hate that kind of impulsive stuff but I always just thought that's an issue, we'll work through it," she explained, before revealing that they last spoke over text message. "What am I supposed to say? What do you say after that? It's like now I have to find a place to live. Now I have to scramble and figure this out, you know."

Although Hartley hasn't spoken publicly about his side of the story, on Aug. 7, a source told Us Weekly that the This Is Us star is "irritated" by the way their split is portrayed in Selling Sunset. "Justin has not watched the episodes but has been alerted to what is said," the source reportedly said. "He’s irritated that she's airing their private information publicly and knows there is more to the story than is being told. His close friends and family know what really happened, as does Chrishell, so ultimately it's her choice of what is put out there."

As difficult as it was for Stause to process the "crazy" situation on camera, it has been equally hard for her to watch it back — especially since her divorce drama takes center stage in Season 3 of Selling Sunset. "Unfortunately, I’m in a position where more has been shared that I would have ever chosen because this was not a choice that I made," Stause said on the RealiTea with Derek Z podcast on August 6. "Nor was this the timing that I would have chosen while I was filming a show, so I’m already in a position where so much has been shared that I wouldn’t have opted for."

Stause continued, "It’s an embarrassing, humiliating type of thing to go through without cameras and without people judging you, so I just hope people are gentle when they watch. We’re real people. This was a traumatizing time in my life and it’s going to be hard for me to watch it myself."

More like this
Watch The Gripping First Trailer For The 'Harry & Meghan' Netflix Doc
By Jake Viswanath
What Is Julia Haart’s Net Worth? The My Unorthodox Life Star Is A Shoe Mogul
By Radhika Menon
At 28, Prue Leith Was In A Secret Affair & Sharing Apple Pie With Stoned Neighbors
By Grace Wehniainen
Khloé Kardashian’s Son Was Born A Week Before Anyone Realized
By Jake Viswanath
Get Even More From Bustle — Sign Up For The Newsletter