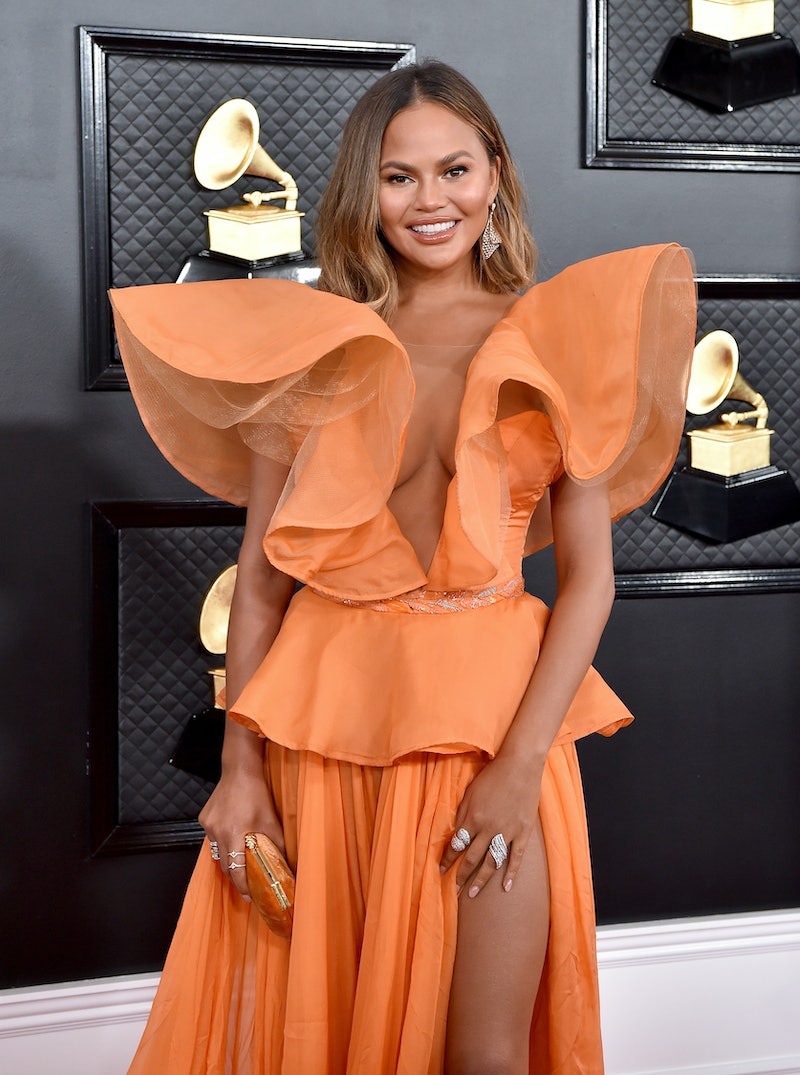 Model, cookbook writer, TV producer — and now, amateur equestrian. Chrissy Teigen has taken up horseback riding at her therapist's suggestion, as she revealed on Twitter on Jan. 16, while sharing a photo of the horse she'll be riding. The Cravings founder has been open about her experiences with therapy following the devastating loss of her third child in late September, and her new hobby is meant to help her better practice self-care. So far, she's already encountered fun and unexpected challenges, like getting used to her riding ensemble.

"My therapist says I need something that I do for just me, as I have absolutely nothing currently lol. Today begins my journey into the horse world. I hope this dude likes me," she wrote, alongside a photo of a dark brown horse with a white nose. "He’s so handsome and appears lazy, I love." In a follow-up post, Teigen revealed that the horse's name is Cosmo, "Like Cosmo Kramer, I hope (he isn’t mine)," she noted, alluding to her love of Seinfeld.

However, in addition to getting to know Cosmo, Teigen also had to go through the trouble of breaking in her riding boots, a hilarious process she documented on her Instagram story. "Not even at the horse part yet lol," she captioned a video of her flexing while on her hands and toes on the floor. "I can feel my heart beating inside my boot," Teigen then told her followers. "It's throbbing. Is this normal?"

"Holy sh*t. Horse people: the boots!" she wrote on Twitter a little while later, along with a video of her tight riding boots. "I always thought breaking in boots meant the foot part but does it mean the calf part because I’m dying over here." Ultimately, though, it looks like she found an unconventional but effective solution: having her mother use a Theragun to massage the boots while she was wearing them.

In addition to sharing her new hobby with her fans, Teigen has been incredibly open about the process of dealing with her grief following her pregnancy loss. "You learn how to cope with it," she told People in November about the heartbreak and grief. "I am very proud to say that there's multiple different therapies I'm using to hopefully become the same person that I was, and I'm okay with that. I'm okay with allowing myself to have bad days and good days."

In addition to sharing the hard parts of healing from the loss of baby Jack, Teigen has also been open about the things that have helped her feel better and find joy. "I have these two toddlers running around that need me and need me to be happy and give them hugs all day," she told People about 4-year-old Luna and 2-year-old Miles. "I have a husband that needs love. I have people that just take such good care of me, and we're all going to get through this together."

On Nov. 27, she offered up a hopeful update on Instagram about her current mindset. "When I'm old and grey, I will look back on the last two months as being brutal, exhausting, sad, physically challenging, mentally painful b*tches of a couple months," Teigen wrote, adding that she was determined to find joy where she could. "I already see the leaves as orange instead of grey, realized the sky is indeed blue and not black ... anyhow the point is, f*ck, I think it's happening."

More like this
Beyoncé Has Officially Won The Most Grammys Ever & Twitter Is Losing It
By Jake Viswanath
The Beyhive Is Mad At Harry Styles After Beyoncé’s Album Of The Year Snub
By Jake Viswanath
Jameela Jamil Defends Sam Smith After Trolls Body-Shamed Them
By Jake Viswanath
Blake Lively Is Trolling Ryan Reynolds Again – Over Wrexham FC
By Sam Ramsden
Get Even More From Bustle — Sign Up For The Newsletter
From hair trends to relationship advice, our daily newsletter has everything you need to sound like a person who’s on TikTok, even if you aren’t.