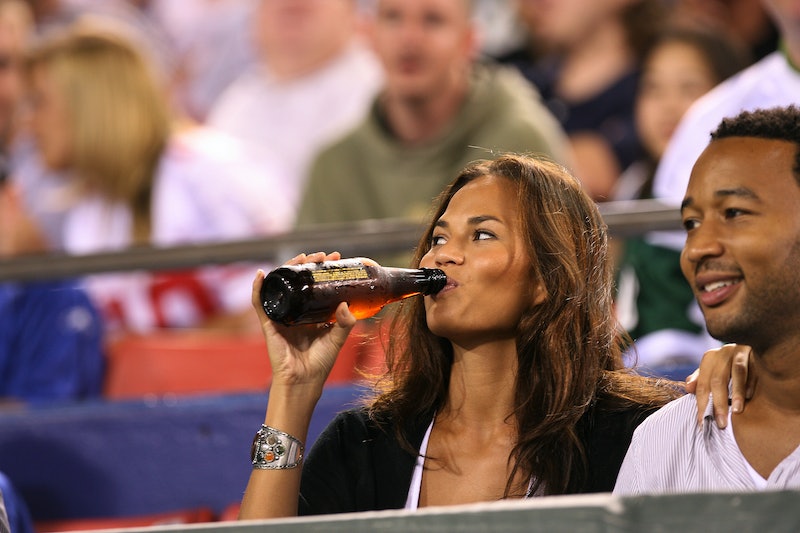 No matter what side of the political spectrum you fall on, Americans can all agree on one thing: nothing is more stressful than presidential elections. Chrissy Teigen, for example, spent election night stress cooking and playing "poop games" with her kids. The star took to Twitter to share her unique stress relief activities as votes from the 2020 presidential election started pouring in. And being that we still don't know what the next four years will hold, the Cravings author may be stress cooking a lot this week.

Teigen kicked things off with a video of her playing a "poop game" with Luna and Miles, which consisted of squeezing a toy dog until it popped out a nugget of... well, you get it. She also gave some attention to her French bulldog Pippa, which was probably more comforting for herself than the dog. "Therapy scratches, therapy scratches!" she said.

The model's next calming activity was one that just about no one could resist: stress cooking. Teigen posted a video of her whipping up something in the kitchen, showing her fellow author Adeena Sussman helping her out. "Just stress cooking, everything's fine, everything's fine," she said in an unconvincing tone. "Don't worry about us, we're OK. We're fine, it's OK. It's going to be fine either way. It's totally fine."

Despite the cooking, it didn't seem like Teigen had the energy to make anything gourmet. When one fan shared that she made Teigen's spicy miso pasta, the cook retweeted the photos and responded with defeat. "Damn I'm having hard shell tacos with seasoning packets," she said.

Teigen has been voicing her political opinions on social media for years, and she was particularly vocal about the 2020 election. She has been targeted by Donald Trump on social media after criticizing him repeatedly, and in August, she officially endorsed Joe Biden and vice presidential candidate Kamala Harris. "Women all over the world are seeing a piece of them in a woman of power, and that kind of influence is paramount in what we need to continue this future of badass women in politics," she told Marie Claire.

Teigen made her support official when she joined husband John Legend at Harris' final campaign rally in Philadelphia on Monday, Nov. 2. Following the event, she announced her plans to never shower again after getting a hug from Harris. "I'm not even sure if we hugged honestly I was very in awe but not showering either way," she tweeted. Once again, Teigen is the most relatable — even amidst a tense and frustrating election.

More like this
The Beyhive Is Mad At Harry Styles After Beyoncé’s Album Of The Year Snub
By Jake Viswanath
Beyoncé Has Officially Won The Most Grammys Ever & Twitter Is Losing It
By Jake Viswanath
Here’s How You Can Watch The Grammys 2023 In The UK
By Emma Madden and Catharina Cheung
Jameela Jamil Defends Sam Smith After Trolls Body-Shamed Them
By Jake Viswanath
Get Even More From Bustle — Sign Up For The Newsletter
From hair trends to relationship advice, our daily newsletter has everything you need to sound like a person who’s on TikTok, even if you aren’t.