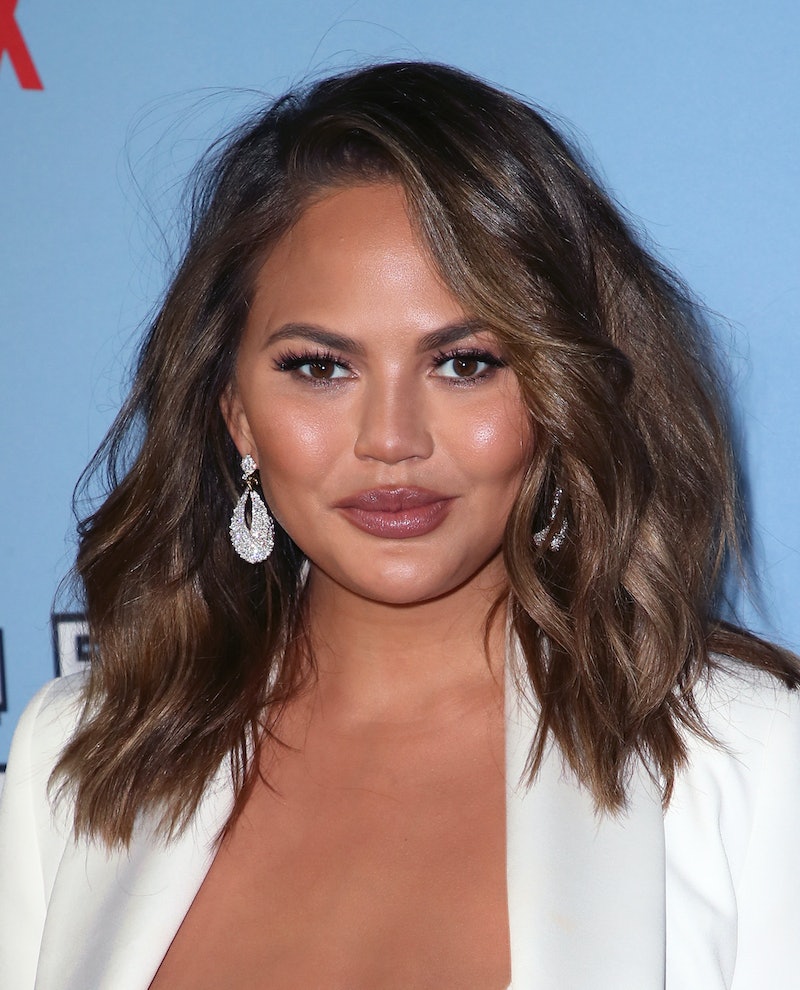 There's no better time than the beginning of the year to switch up your look, and Chrissy Teigen did just that when she debuted a brand new nose piercing on Instagram. We know what you're thinking: Didn't the Cravings author get her nosed pierced while vacationing in St. Bart's last week? Yes. However, her first attempt at getting the piercing was unfortunately a major fail.

"So I did this today and it immediately fell out and healed the second she left because she did it wrong lmao," the star tweeted on Dec. 28 alongside a photo of her botched nose piercing. In a separate tweet, she wondered how it was even possible to mess up such a simple task. "It's a hole, through the nose," she wrote. "It's like jerry seinfeld's bobsledding joke. It's impossible to do wrong."

On Sunday, Jan. 3, however, the Lip Sync Battle Host revealed that she had the piercing redone. She posted a video showing off the nose stud on Instagram and tagged professional piercer Brian Keith Thompson for helping her pull off the look. "I did it," she said in the video. "Second time's the charm." Teigen also thanked Thompson in her Instagram Story, writing, "love u sir! best dressed man in the biz."

After her first nose piercing, fans immediately chimed in on social media to offer some wisdom; some people said that the placement of the ring was likely too high while others advised her to let the spot heal before trying again. And although some of the comments may have been helpful, Teigen really didn't want unnecessary feedback from strangers. "It's out and healed you don't have to keep being *ssholes thanks I'll do it better next time for you I promise!" she tweeted.

The cookbook author seems much happier now that her second attempt at a nose stud was a success. Friends and fans even took to the comments of her latest Instagram post to let Teigen know how they feel about the piercing. Paris Hilton, for example, dropped a heart-eye emoji in the comments, while Jordin Sparks wrote, "Love itttttttttt!"

Teigen, who seems to be very open to switching up her style, also recently shared a video with purple hair from vacation. "Well I absolutely have to do this when I get home," she wrote before reassuring fans that these sudden changes to her look are nothing to worry about. "I realize this looks like I'm having a crisis lol I just wanna start looking the way I've always wanted to!!" she said.

More like this
Chrissy Teigen Reveals Her Miscarriage Was An Abortion That Saved Her Life
By Radhika Menon
Everything To Know About 'RHONJ' Season 13
By Brad Witter and Jake Viswanath
Everything To Know About Taylor Swift’s 10th Studio Album, 'Midnights'
By Grace Wehniainen and Jake Viswanath
The 'Reasonable Doubt' Cast Includes A 'Save The Last Dance' Reunion
By Grace Wehniainen
Get Even More From Bustle — Sign Up For The Newsletter