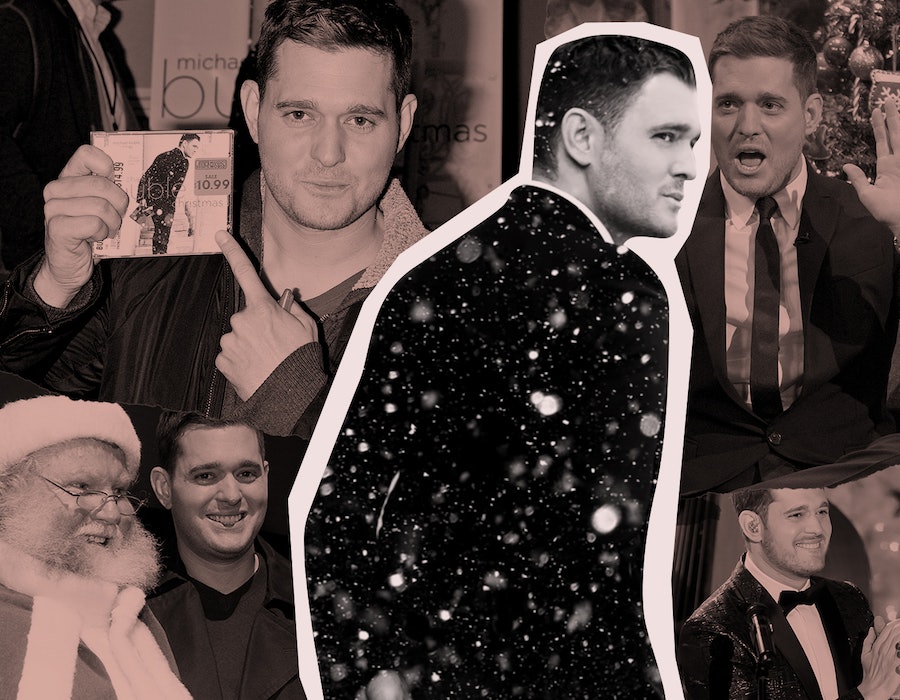 I am not a Christmas grinch. I want to get that out of the way right up front. I genuinely love baking Christmas cookies, and watching The Muppet Christmas Carol, and listening to holiday music. I will actively put "Simply Having a Wonderful Christmastime" on my playlists! So when I tell you there is a single Christmas song that sends cold shivers down my spine, please know that it is not just misanthropic hyperbole in the spirit of bah humbug. No, this is a song that absolutely chills me to my very core. I hate it. It should be scrubbed from the internet and all remaining copies on CD should be gathered up for a somber (nonfestive!) bonfire on Mitch McConnell’s lawn to commemorate the start of the war on Christmas.

I am speaking of course, of Michael Bublé’s cover of “Santa Baby.”

“Santa Baby” itself is a perfectly delightful song about seducing Santa so he brings you expensive presents on Christmas morning. Michael Bublé, the self-appointed patron saint of Christmas, heard its jazzy melody, and thought, “Gee whiz, I would sure sound great singing this song.” The only problem, Bublé knew, was it was unambiguously a song about wanting to f*ck Santa. And so he changed the lyrics, and gave birth to the musical embodiment of the phrase “no homo,” a theme song to America’s masculinity crisis wrapped in tinsel. With the exception of the general concept of Hooter’s, Michael Bublé’s “Santa Baby” is north America's preeminent example of performative heterosexuality.

Rather than ask for a duplex and checks, Michael requests Canucks tix. Because, you know, sports are manly.

Though Bublé’s song is called “Santa Baby,” he takes it upon himself to refer to Santa throughout not as “baby,” but instead as “Santa Buddy.” It is awful. What is your relationship with Santa Claus in this song, Michael Bublé? Are you Ellis from Die Hard trying to butter him up? (“Santa, buddy, I’m your white knight!”) Does the “buddy” contain an implicit threat? Or are you really just earnestly singing about how you hope your friend Santa brings you a fancy watch on Christmas?

Not content to have just changed the core lyrics and basic premise of the song, Bublé also changes the various objects he asks for to make sure that Santa knows he’s extremely manly. It’s a “Rolex” not a sable he wants under his tree, and God forbid Santa bring him a light blue convertible; no, Bublé’s convertible must be “steel blue.” STEEL BLUE! Thanks to gender reveal parties and our strange cultural obsession with gendering baby clothes, light blue is quite possibly the color most associated with the male sex. You need your car to be a manlier blue, Michael Bublé? It’s at this point that, at least to me, it seems to sound like Michael Bublé is compensating for something, like he is having this conversation on the phone with Santa while his wife is in the next room and he can’t let her know that their relationship has become more than platonic. I mean, the very next line is, “I’ll wait up for you, dude.”

He also requests that his tree be trimmed with decorations bought not from Tiffany’s but from Mercedes. Michael, sweetie, I know Tiffany’s is a girl’s name, but it is just a store.

In the rest of the song's verses, rather than ask for a duplex and checks, Michael requests Canucks tix. Because, you know, sports are manly. He also requests that his tree be trimmed with decorations bought not from Tiffany’s but from Mercedes. Michael, sweetie, I know Tiffany’s is a girl’s name, but it is just a store. They make fancy decorations and ornaments! What kind of tree decorations do you want from Mercedes? You’re just embarrassing yourself now.

In the last verse, he drops the “Santa Buddy” completely and refers to him instead as “Santa Papi,” which, come on. We have to all admit that “Santa Papi” is an objectively far more homoerotic way to refer to Santa than “baby.”

As a rule, I think artists changing the gender of pronouns in songs that they cover is dumb and unnecessary. It almost always just ends up sounding shoehorned and awkward. If Michael Bublé had just sang “Santa Baby” the way it was written, I wouldn’t have given it a second thought. We understand how songs work, Michael. Instead, his strange bastardization raises the exact questions in my mind that he so clearly sought to quell.

Pity us Jews who suffer from a genuine dearth of holiday songs and who thus were forced to pretend that “A Puppy for Hanukkah” was actually good.

This leads to a larger point: Let’s stop making uncomfortable little edits to Christmas songs. John Legend and Kelly Clarkson tried to undo the perceived rape-y vibes of “Baby, It’s Cold Outside,” with a “woke” version that just comes across like Kidz Bop. “I'll call the car and tell him to hurry”? Now you’re just trying to get rid of her!

It’s the opinion of this writer that the song “Baby, It’s Cold Outside” was always intended to be flirtatious on both ends — the female singer clearly wants to stay, but is playing coy as required by the 1940s social context in which it was written. To me, the “anger” over that song is an intentional misreading meant to provide playful controversy. But actually getting two of our best vocalists to record a new version is wild and embarrassing overkill.

Look: If there’s a Christmas song you don’t like, don’t listen to it. If there’s a Christmas song that you think requires a major lyrics change that undoes its entire premise, don’t sing it. The great news is, there are more Christmas songs per capita than basically any other kind of song. You can leave one off your playlist without anyone actually caring. Pity us Jews who suffer from a genuine dearth of holiday songs and who thus were forced to pretend that “A Puppy for Hanukkah” was actually good.