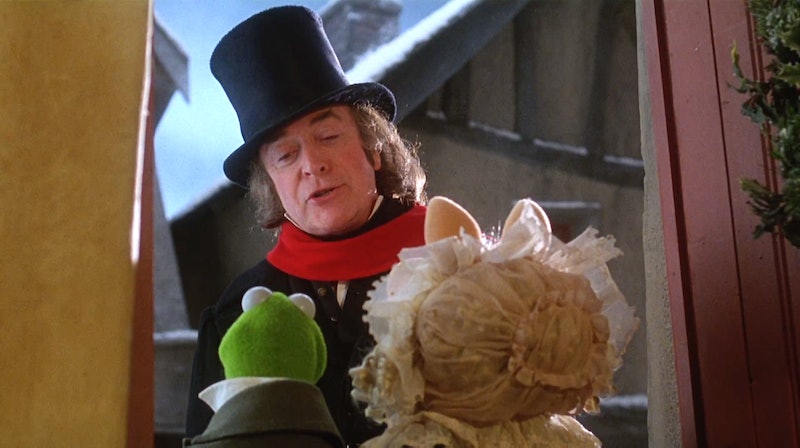 Every few years, an adaption of Charles Dickens' A Christmas Carol is released for the holiday season, but the best version is The Muppet Christmas Carol from 1992. Dickens' story is nearly 175 years old, but the Muppets' interpretation turns 25 years old this Christmas season. As The Guardian noted, it was the first Muppet movie after the death of the group's creator, Jim Henson, and Brian Henson did his father proud as the director of the film. (It also marked the first time that the recently-fired Steve Whitmire voiced Kermit.) And while it has some stiff competition due to the sheer volume of Christmas Carol adaptations that exist, the utterly charming The Muppet Christmas Carol stands puppet head and shoulders above the rest.

During the 2017 Christmas season, Dan Stevens is starring as Dickens in The Man Who Invented Christmas, a new movie about how this classic holiday tale was created. And even the man portraying Dickens has acknowledged the brilliance of The Muppet Christmas Carol during press interviews for his new movie, as Stevens told HelloGiggles that The Muppet Christmas Carol is the best adaption of Dickens' novella about Ebenezer Scrooge. "We make sure we sit down and watch that every Christmas Eve. And I love it," Stevens said.

If Stevens isn't enough to convince you, no worries. Even without celebrity endorsements, The Muppet Christmas Carol proves all on its own why it's the best Christmas Carol around with these 23 reasons.

"A blue, furry Charles Dickens who hangs out with a rat?" Sure, it's a major departure from the original story since Dickens doesn't appear in A Christmas Carol, but the Muppets decided to have Gonzo the Great embody the author. As Dickens, Gonzo serves as a narrator with his comedic sidekick Rizzo the Rat. It allows the movie to directly quote the novella through more than just dialogue (for literary nerds, it's fun to compare and contrast the dialogue with the original text) and it even educated kids a little bit about the famous author. Plus, Gonzo and Rizzo have some pretty sweet costumes and a running window gag.

Plenty of esteemed actors have taken on the role of the crotchety Scrooge, including Lionel Barrymore (you know, Mr. Henry F. Potter in It's A Wonderful Life), George C. Scott, and Patrick Stewart. But the Muppets nabbed Sir Michael freakin' Caine — one of the greatest living British actors. And only an actor of Caine's caliber could so convincingly play it straight while being surrounded by singing Muppets.

3. It's A Muppet Musical

Speaking of singing Muppets, this is one of the few film adaptations to make Dickens' story a musical. Add to this the fact that the majority of the supporting cast and chorus are the imaginative Muppets, and The Muppet Christmas Carol becomes the most wondrous adaptation hands down.

Spoiler alert: The mice get the cheese that they wish for in the song "Scrooge" by the end of the film. And they manage to slip in a reference to another Dickens' story — Oliver Twist — by saying, "Please, sir, I want some cheese."

Usually, Bob works all alone for Scrooge, but the Muppets gave Kermit's Bob the rats as his fellow bookkeepers for levity.

Full disclosure: Bean Bunny is this author's favorite Muppet, but has a more adorable version of "Good King Wenceslas" ever existed? Admittedly, Hugh Grant's rendition in Love Actually is a close runner-up.

7. It Perfectly Expresses The Magical Feeling Of Christmas Eve

"One More Sleep 'Til Christmas" is required listening on Christmas Eve.

In the original version, there is only one Marley — Jacob. But The Muppet Christmas Carol doubles the friends Scrooge had with Statler and Waldorf as Jacob and Robert Marley. The hecklers are flawlessly cast as Scrooge's former business partners that spookily — and hilariously — warn him ("We're Marley and Marley, Whoooo!") where Scrooge will end up if he doesn't get in the Christmas spirit.

"Hey, should we be worried about the kids in the audience?" Rizzo asks after the appearance of the Marleys. "Naw it's all right. This is culture," Gonzo's Dickens replies. Gonzo and his narrating assistant continue to infuse this type of self-aware humor throughout the story.

10. The Ingenious Ghost Of Christmas Past

The childlike Ghost of Christmas Past is fairly unsettling, but it gets points for ingenuity. Film School Rejects wrote that it was revealed in the commentary on the 20th anniversary Blu-ray release that this ghost was a rod puppet that was submerged in baby oil and water to get the floating effect.

11. The Acknowledgment Of The Americanization Of This British Story

The all-American Muppet Sam the Eagle is Scrooge's childhood headmaster, so he tells Scrooge that business is "the American way." But Gonzo alerts Sam that he needs to revise the line to be, "It is the British way." This is a great acknowledgment of the fact that the Muppets all have American accents in this story set in England while the human actors are British.

Fozzie Bear plays Scrooge's first employer, Fozziwig. In the original story, his name is Mr. Fezziwig, so the comedic bear was destined to play this part. And in the Muppets version, old Fozziwig gets to live to celebrate Christmas in the present day. Wocka, wocka, wocka!

13. The Incorporation Of Beloved Muppets

While not every Muppet could make an appearance in the movie, The Muppet Christmas Carol managed to include many favorite characters. Fozziwig's party has Animal on the drums, Rowlf the Dog on the piano, and the Swedish Chef as the caterer. Bunsen and Beaker are the charity collectors at the beginning and end of the film as well.

IMDb notes that Raymond Coulthard is the young adult version of Scrooge and seriously, did the Muppets have access to a time machine? Because Coulthard looks remarkably like Caine in his brief appearance.

15. The Legend Of The "When Love Is Gone" Deleted Song

You may have a faint memory of the song, "When Love Is Gone," that Scrooge's love interest Belle sang. Caine joined in on this heartfelt song, but it was cut from many releases of the movie. Digital Spy reported, "Walt Disney Studios' Jeffrey Katzenberg ordered the scene to be removed from the original cinema release, believing that it would not appeal to kids." It's a shame it was cut since beyond emotionally developing Scrooge's character, Scrooge's reprise at the end of the movie makes less sense — and Martina McBride's end credits version is even more out of place — without it. So if you've got a version of the movie with the song, consider yourself lucky.

16. The Ghost Of Christmas Present & His Joyful Song

The Ghost of Christmas Present is a jolly delight and is a wholly original Muppet that succeeds in winning Scrooge over, thanks in large part to his song, "It Feels Like Christmas."

Does any other Christmas Carol have dancing horses? Yeah, didn't think so.

18. The Casting Of Bob Cratchit's Family

Who else could have possibly played Mrs. Emily Cratchit other than Miss Piggy? And Kermit's nephew Robin is so unbearably cute as Tiny Tim, the youngest child of the frog and pig family.

Kermit and Robin sing a cappella down the street in Tiny Tim's first appearance. It's a display of how purely happy this family is and it also pays homage to Jim Henson. Brian Henson told Uproxx in 2015, "The scatting is something that my dad always used to love to do. He loved to scat along with a song. To have Kermit scatting, Robin singing was kind of an ode to my dad, precisely what he would've done."

In every version of A Christmas Carol, Scrooge transforms into a kindhearted person, but Caine gets to really show off how much Scrooge has changed with the song, "Thankful Heart." Plus, it's Sir Michael freakin' Caine singing with a bunch of Muppets.

21. The Reveal That Tiny Tim Survives

Gonzo the Great deserved an Oscar for his delivery of the line, "Tiny Tim, who did not die!" As Rizzo says, "Aw, isn't that swell!"

In an interview with GQ in 2016, Caine talked about how much he still loves this movie and what a "lovely" experience it was to make it. He even said he watches it "all the time" with his grandchildren. "I see it every year, because it's on television every year at Christmas," Caine said. "It's a good, fun film for kids. And of course, it can never grow old, unlike me."

The Dickens story is a classic for a reason, but not every adaptation has the ability to still genuinely resonate with viewers. With the Muppets being puppets and the set being real, there's no aging technology here. And because it stayed true to the story with a few modern and Muppet-y updates, The Muppet Christmas Carol is just as moving and heartwarming as it was 25 years ago.

Celebrate the quarter-of-a-century anniversary of The Muppet Christmas Carol by letting Caine and the Muppets show you the real meaning of Christmas. To play on Caine's words, it's the loveliest Christmas Carol of the lot.