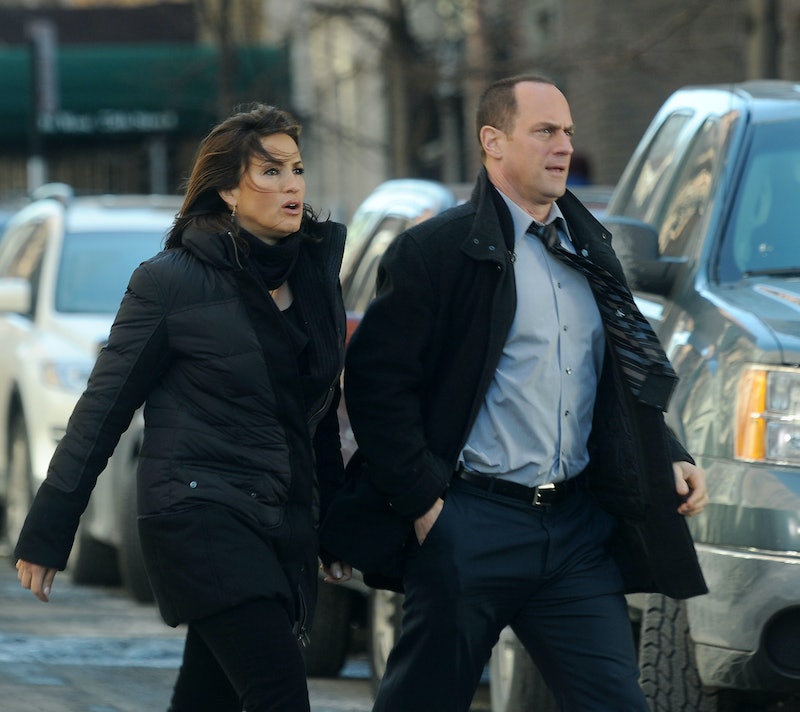 Christopher Meloni is aware that Elliot Stabler’s departure from Law & Order: SVU was unsatisfying, and he's willing to make it up to us. The star of the upcoming Stabler-led spin-off series Law & Order: Organized Crime said he hoped Olivia Benson and Stabler’s Law & Order reunion would explore “unresolved emotions" from when he left the series. Though he will be starring on his own show, Meloni teased the crossover episode of SVU and Organized Crime — the latter of which will follow Stabler’s return to the NYPD in the wake of a “devastating personal loss” to lead a task force focused on mob activity — in a new interview with the New York Post.

As for what Meloni wants the crossovers to explore, he cited the former partners' relationship as front of mind. “Benson and Stabler are inextricably linked, locked, and connected,” Meloni said. “I think there is truly and deeply a worthwhile, inherent drama in exploring that relationship and the complexity of how Stabler left — the unresolved emotions both characters feel and how the fans feel.” He then teased more than one crossover episode and added, “How my character left was really unsatisfying, I think. It almost feels that we won’t do one or two [crossover] episodes and move on our merry way.” Meloni continued, “I just think there will always be possibilities there. People will always be hungry to see how we interact and how that dynamic has changed.”

Meloni departed SVU in 2011 after 12 seasons. In the Season 13 premiere, it was revealed that Stabler retired from the force after the shooting that occurred in the Season 12 finale. “How I left was a different issue and had nothing to do with the Law & Order people, the SVU people, or with Dick Wolf,” Meloni stressed in his interview. “I left with zero animosity, but I did leave clearly and open-eyed in going forward and finding new adventures.”

As for Meloni’s Law & Order homecoming, SVU and Organized Crime’s production have both been paused due to COVID-19. In an interview on SVU’s official podcast last month, however, showrunner Warren Leight revealed that Season 22 of SVU will set the stage for Organized Crime. “We were just going to lay some groundwork down in anticipation of Elliot's return, of course, in his own series,” Leight said. “We had the sense that the first episode of next year for SVU was going to bring Elliot back, so we were going to foreshadow that and explain a little more what happened to Simon.”

He continued, “There's a lot of moving parts. It's not just about the SVU season opener, it's how do we help launch the new series and how much crossover will there be between Elliot and Olivia as the season goes on."